As I make my way to work every morning I see a number of ads on the subway and street for Arrow, the CW show set to debut on October 10th about a character who resembles DC superhero The Green Arrow. The marketing for the show is reminiscent of Smallville, where the shirtless hunky lead is essentially the big sell. Still, Smallville managed to be on the air for 10 seasons with its Superman-style stories, so it holds the honor of being the longest running live-action superhero comic book adaptation to TV.

Off the top of my head, the handful of shows that have had the biggest impact (both famous and infamous) have been the-live action Batman from the ’60s, Wonder Woman from the ’70s, and then The Incredible Hulk from the ’70s and ’80s. After that is a series of missteps and attempts at replicating some of the success of those shows, mostly with other DC and Marvel heroes. These have been footnotes of VHS and later DVD abnormalities over the years. 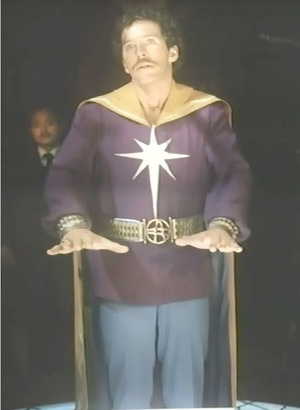 The examples go on and on. On the plus side a younger me was fond of The Flash for the season that it was on, and the live-action Tick had some inspired comedic moments in the brief season that it aired. I own a DVD box of the two Hulk TV movies that guest-starred characters Thor and Daredevil respectively. Apparently there was talk of making a TV show about Daredevil in the late ’80s, an idea that I still think could work, especially now that it seems like rights to the character will revert back to the Marvel movie and TV studios. All of these ideas didn’t catch on obviously, and there are many original superhero TV shows that also flamed out. Television hasn’t seen the comic book boom that the movies have seen, even though television with its serialization seems like the perfect medium for comic book adaptation. Baby steps are being made, except it’s not with superheroes.

The Walking Dead is approaching its third season this October, and while I and many others have problems with various characters and plot developments, many still watch and the show still brings in big numbers for AMC. There are elements directly from the comic, and often many other pointless aspects unique to the show.

One big advantage is that the show is essentially a never-ending zombie movie that doesn’t have to stray very far from the character interaction of a typical one-hour drama series, since the monsters of the show wander aimlessly in the background of some scenes and occasionally walk into the shots. Since budget is a major obstacle in any genre TV show (except animated ones), there doesn’t necessarily even have to be any physical zombies in an episode, just a bunch of people bickering with each other and occasionally trying to figure out what to do about the zombies and surviving. 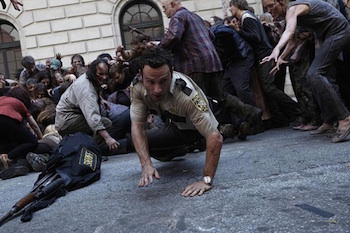 The show has managed to get some things right, as it again draws in great ratings for AMC. It’s an experiment to see how to adapt a comic series, as it is using major plot points from the first three graphic novels. Just as shows like The Sopranos, 24, Battlestar Galactica, and Lost set the tone for genre television in the early ‘00s, The Walking Dead and Smallville are really the only success stories in the last decade that network and cable executives have to go by for developing future television adaptations. They could also look towards two movies from this past year that have relied on television tropes in its characterization and film structure. Box office-wise, one was a massive success and one has so far failed spectacularly.

The Avengers and Dredd are two of my favorite movies based on comic books that came out this year.  Obviously many agreed on the former, as it’s grossed over six hundred million dollars according to Box Office Mojo. Dredd unfortunately will probably not even make its fifty million dollar budget back. In addition to the explosive effects, what I feel also worked in Avengers was the team chemistry and dialogue, which blended well with the insane action sequences. Much of that can be attributed to writer and director Joss Whedon, a TV veteran who has made a career of creating well-loved shows where a team of distinct characters spouting witticisms go on crazy adventures together, whether it be the teens and monsters of Buffy The Vampire Slayer or the crew of the spaceship Serenity.

Dredd, due to budget issues, told a more focused day-in-the-life story of what Judge Dredd goes through on the job. It is told mostly from the perspective of new recruit Judge Anderson, and has the feel of a TV pilot episode as directed by John Carpenter and ‘70s Ridley Scott. The world is established; we know these Judges are the law (without Sylvester Stallone telling us so) and the adventure in the gang-ridden Mega-Block begins within the first 20 minutes. Writer Alex Garland (of Trainspotting and 28 Days Later fame) makes many mentions of 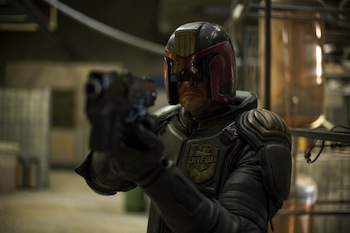 the rich and insane dystopian future that Judge Dredd operates in while also telling a story that moves along in a propulsive and straightforward manner. Budget was a big factor in this, but director Pete Travis uses the claustrophobic sets effectively.  I almost wish that BBC or someone went ahead and made this the pilot episode of an insanely brutal dystopian police procedural TV show.  Since the movie hasn’t fared so well in the box office, this will probably be the unfortunate end of an inventive and ambitious franchise.

What’s most unfortunate about Dredd bombing is that it probably won’t be used as a blueprint for crafting a successful superhero adaptation TV series. The movie felt like a great issue of 2000 AD comics. This holds true for TV: treat each episode like an issue, and each season (or half season) like a story arc to be collected in a graphic novel. Like in Avengers, make us care about the characters and enjoy their interaction, so that we don’t even notice they’ve been hanging out in a lab for 15 minutes. (Despite the medium allowing for more impressive battles and action sequences, even animated adaptations of the DC comics universe and some of the more recent Marvel cartoons still boast impressive voice acting and characterization.)

While Arrow will probably rely more on guests of the week and hammy action it may still attract that teenage crowd every network craves, possibly ushering in the greenlighting of more superhero shows (for better or for worse). Or it will bomb horribly and be cancelled, putting the kebosh on DC TV for another few years. Meanwhile, there’s a Whedon-produced S.H.I.E.L.D. series in the works that may finally be to superhero shows what Game of Thrones has been to fantasy on TV, proving that it does work as a compelling and successful storytelling medium. Or maybe it will simply prove that TV can’t get superheroes right, and that they belong only on the page and silver screen.