“Tell Grimlock war story!” said the King of the Dinobots.

“This was towards the end of the Great War…”

Hot Rod and I were investigating a strange distress signal in deep space when all of a sudden, our ship’s scanners went haywire. An unidentified energy surge sped towards the planet. We set an intercept course, but that energy surge moved too fast!

As we approached the planet, our scans indicated it couldn’t support organic life. If there were survivors, they were either like us Autobots or they were in a ship with life support. We charged up our atmospheric systems, in case we had to transport any carbon-based lifeforms, broke through the atmosphere and located the energy signature. It was located at the same spot as the distress beacon – a derelict ship!

“It looks like a modified Skuxxoid cruiser. What would those mercenary creeps be doing all the way out here?”

“Only one way to find out, rust bucket!”

The kid may have been a Prime once, but he sure as an oil slick never lost his impetuous streak. When we landed, we noticed a hole the size of Unicron’s right eye in the hull.

“The energy signature is in the cargo bay. Let’s roll, Kup!” 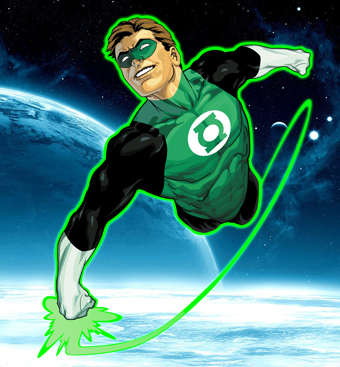 We get to the cargo bay and right there in the middle is the body of what looks like a Cybertronian with a human bathed in green light hovering over him. He looked up as we transformed from vehicle to robot mode.

“Huh. Cybertronians. I was wondering when I’d run into you.”

“You haven’t been back to Earth in the past decade, have you? My name’s Hal Jordan, Green Lantern of Sector 2814, and by the red symbols on your chests, I’d guess that you’re Autobots – the good guys.”

The kid and I were stunned.

“We kicked the Decepticons off Earth and then we left, just like we promised,” I said.

“I could ask the same of you, Red. You’re a ways away from Cybertron… and so is this guy.”

Suddenly, Green Lantern’s ring unleashed a ball of energy that took the form of a human hand. The hand then gently turned over the chassis in front of us.

Hot Rod filled the floating man in as I approached the body. Dead Decepticon air commander turned menacing ghost. The corpse had a blaster wound in the chest.

“Galvatron. That Metroplex thing,” I said.

“Last we saw, Starscream was living up to his name, floating through space.”

Then, and then it’s all a blur. I saw the eyes in Starscream’s corpse flicker and then I felt like a passenger in my own body. Starscream’s Ghost was in the driver’s seat.

“Ah, Rodimus Prime! Or is it Hot Rod now? Been a long time. Still the ‘turbo-revving young punk’?”

I got dizzy again. When I came too, Hot Rod was screaming. He transformed into his vehicle mode and hightailed it out of the cargo bay.

“Lantern! We gotta stop him!”

Green Lantern sealed off the hatch Starscream was headed for. He transformed into Hot Rod’s robot mode and began blasting at us with the kid’s photon blaster. A shield poured out of the Lantern’s ring.

“Is that ring a machine?”

Suddenly, Hot Rod fell and the Lantern’s ring began to spark erratically. Hal Jordan screamed as he struggled to keep his composure – his willpower intact.

“Rodimus of Cybertron, you have the ability to overcome great fear. Welcome to the Green Lantern Corps.”

Then the ring said, “ERROR. ERROR.”

Hal’s uniform flickered in and out, revealing a bomber jacket and… what do humans call them? Jeans? He faltered. I transformed to vehicle mode and rushed under him as he fell. I opened my hatch. He hit the front seat and I sealed myself up. See? Good old Kup can serve as a human-friendly atmosphere in space!

Green swirled out of the ring, trying to take shape. And then the ring started laughing a high-pitched, maniacal laugh. A form began to take shape. In a second, a full-sized, translucent green Starscream was standing in front of me. The ring was in the center.

Starscream put his arm out and all of a sudden, I was besieged by translucent green Insecticons.

Hot Rod transformed and booked towards me, blasting the Insecticons with his photons.

“Kup, you need to get me closer to the ring,” Hal said. “The ring is fueled by willpower. His constructs look weak. If you two can distract him enough, and get me close enough, I can call the ring back.”

Hot Rod kept blasting the Insecticons. I burned rubber and drove through Starscream’s legs. His torso was still hovering over me. Hot Rod blasted the green ghost in its face.

“You idiots! I’m beyond your…” Hot Rod blasted his translucent face again. Hal inhaled, pushed his right hand up while his left opened my hatch.

“In brightest day, in blackest night, no evil shall escape my sight.”

Starscream began to flicker. Hot Rod fended off some Insecticons, then blasted the green ghoul again.

“Let those who worship evil’s might beware my power, Green Lantern’s light!” 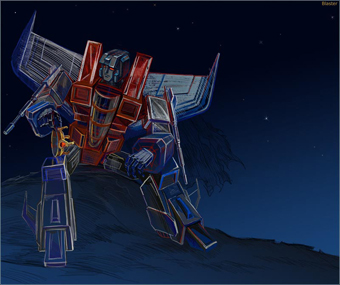 The ring shot down and slipped right back onto Jordan as Starscream’s image disappeared. The remaining Insecticons disappeared.

“No!” Starscream panicked. Then things got hazy again as Starscream jumped back into my body. While he was getting his bearings inside my noggin, a big green box appeared around me.

“You’re trapped in the construct, Starscream. Hot Rod, on my authority as a Green Lantern Honor Guard, you are hereby deputized.

A ring soared from Hal’s right onto Hot Rod’s hand.

“Rodimus of Cybertron, you have the ability to overcome great fear. Welcome to the Green Lantern Corps.”

There was a burst of green and there were two Green Lanterns in the room.

“Hot Rod, do you know what a Phantom Zone Projector is?”

“OK, then hold that box together while I do my thing.”

Hot Rod obliged while Hal made what looked like a normal Kryptonian projector. Then he pointed it at Starscream and me.

My circuits were overloading and the projector started pulling me towards it. I felt Starscream slipping. Chains poured out of Hot Rod’s ring and held me in place as the projector pulled Starscream out of me and into some unknown void. We heard a scream echo from the projector and then it disappeared.

“Gotta thank Clark for that one,” Hal said. “And thank you, guys. He flicked his ring and Hot Rod’s ring disappeared.

“Starscream’s trapped in the Phantom Zone; it’s a bodiless prison, perfect for a ghost. Your service is at an end, gentlebots. Thank you.”

And just as quickly as he got there, the Green Lantern flew away.

“Well, yeah, we stopped the bad guy and then the Green Lantern flew out of there.” I said.

Hot Rod shook his head and I start to tell Grimlock the petrorabbits story again.