“Dope abs,” said Harry Potter, from deep within the hollow of a tree.

Swamp Thing did not realize that anyone had been watching him as he bathed himself, wading just up to the tips of his magnificently mossy glutes and dabbing his wide, tapered chest with a damp clump of bog mass.

“That comparison…is not…unjustified,” replied the soggy, mud man with a half-smirk below eyes as red and yellow as flame.

Their sex was like the swamp itself, filthy, humid and alive. Afterward, Harry Potter was relieved to find one of his cigarettes still dry. He popped it into his mouth with the practiced grace of a magic trick – at least, what passes for magic in the muggle realm.

“So what’s your deal, swampy?” he asked, pulling on his signature crescent moon-patterned pajama pants. “You just stand around naked in ponds all day waiting for boy wizards to materialize on the shoreline and pound your ground?”

“I am…the protector…of this place,” said Swamp Thing, cramming another sweet butterfly into his mouth – a rare post-coital indulgence.

“Whatevs,” said HP, taking a long drag. It was nearly dark and the slow-witted Ron would soon catch up with him. Perhaps this would finally be the fumbled teleportation spell that landed Ron partially into a wall of stone, thought Harry blissfully. He took a moment to imagine the top half of Ron’s partially-reconstituted head slowly sliding down a warped facade of brick, his tiny fingers still helplessly flexing like worms poking their heads out on a rainy day.

“Fuck, that reminds me,” said Harry out loud, “I gotta update Instagram.”

“…What?” asked the Swamp Thing. He had no need of human phones.

“Nothing, it’s just being weird. Hey, do you want to do this again sometime?”

“If it is…to be…then it…will be,” said the wise, old plant monster.

“God, never mind,” said Harry Potter, lurching to his feet. He was still a little “teleport drunk,” as wizards like to say, and also, regular drunk from the airplane-size vodka bottles he’d pocketed from Hermione’s jewelry box earlier that morning. 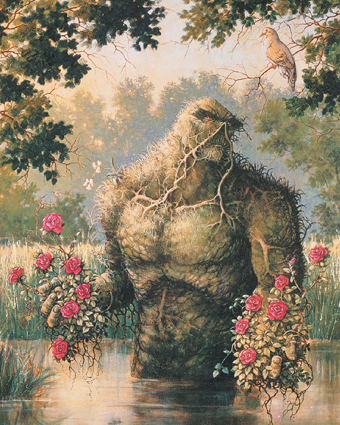 Suddenly, a meteor approached. “Oh shit!” said Harry Potter, “That meteor is going to end all life on Earth!”

“If it is…to be…then it…” but the monster was already dead, vaporized by a splinter of flaming debris before he could finish his last ponderous statement. Harry dove from the firestorm, finding only temporary respite under the shelter of a big, leafy palm. He frantically began texting Ron – maybe that ginger buffoon would have enough magical energy left to teleport them both to another celestial plane.

“If this be my end, then let me die on my feet – AS A MAN!” snarled Harry. He took a switch of palm and, bracing it between his teeth, bit and twisted hard, snapping it off into a makeshift wand. He pointed it skyward with futile purpose.

“Impedimenta Meteorum!” he cried to the heavens, and a bolt of crackling energy burst free from the tip of the switch like God’s own righteous anger, striking the meteor and then rapidly criss-crossing around it, as though weaving it into the clutches of an electric spider-web. It slowed the extinction-level projectile, but it only bought Harry – and humanity – a few seconds.

Suddenly came a sound, more deafening even than the shredding of Earth’s atmosphere – deafeningly close.

“You, boy!” cried a voice over the thunderous mechanical noise. “Move your ass!” It was Dilbert, in his legendary time-travel helicopter, its passenger door swinging open to salvation. It was the most beautiful sight Harry Potter had ever seen.

“I said drop your stick and move your dick, you ungrateful little shitbean!” shouted the unfathomably cool chrono-pilot from the smooth fleshy patch where a lesser man’s mouth would be. Harry didn’t need to be told twice. Shielding his head, he leapfrogged from patch to patch of sinking swampland, ducking flaming chunks of atmosphere and just barely making it to the Dil’s escape copter.

“How did you know to find me here?” asked Harry, tentatively wondering if his all-time chopper pilot hero had seen his dampened dalliance with the masculine bog monster just minutes earlier.

“I’ve been following your teleport signatures, you smug little condom. You and your feeble-minded school chum have been fucking wise with the fabric of spacetime. Now this whole sentience-system is about to go tits over butthole, and it’s all your fault.”

D-bert yoked up hard on the chopper’s chronal distortion controls and the world in front of them became a spiraling iris of light, like all of time and space was an iridescent cloth twisting from the center before them, and then yanked away leaving only the endless blackness we fear to be underneath.

“Everyone you know is now dead. Buckle up.”

A pinpoint of light appeared where the horizon would be and HP and the Dil sped toward it – or perhaps it sped toward them – until the whole of existence was a blinding sheet of white. Harry felt his corporeal form weakening and breaking away like an Oreo dropped into the belly of a glass of milk, but somewhere in the nothingness he felt Dilbert’s hand grip his shoulder and he knew the devil-may-care time-pilot would not steer him wrong.

Everyone you know is now dead. Buckle up.

“That’s the Void trying to absorb your sentience!” echoed Dilbert’s voice, distant yet everywhere. “And you’re not getting off that easy on my watch, you magic cockhair!”

The vortex began to subside, like the whole world was a rippling pond gradually growing still. The omnipresent sheet of white gave way to light – real daylight – although something about it remained honeyed and unnatural, like being on the inside of a photograph. Harry looked out the windshield of the Chrono-copter – the swampland was familiar, but the dinosaurs were new.

“When and where are we? GAH?!” Harry leapt back, startled by a sudden TAP TAP TAP at the glass. It was the life-hardened beak of none other than Jonathan Livingston Seagull.

“D,” the bird acknowledged back. “Who’s the grub?”

“This is Harry Potter, the unhinged diaper leak that caused all this mess. He thought it’d be fun to go gallivanting around the Sentience Sphere getting his wand wet in naive moss men.”

Harry shrunk into his seat a little.

TO BE CONTINUED IN THE NEXT UNIVERSE-HOPPING INSTALLMENT OF DILBERT & HARRY POTTER: FUGITIVES FROM THE NOW

Follow Daniel on Twitter @kibblesmith. It’s your best bet to learn more about the further adventures of Dilbert and Harry Potter.