The clerk sees arms coming from around paper grocery bags. They end in knobby hands, each doing its part to hold in a section of the bulging parcel. A cigar pokes from between the fingers of one, smoldering at the head of the unsteady load like a dying locomotive. He’s cleaned out at least half a shelf, the clerk thinks. 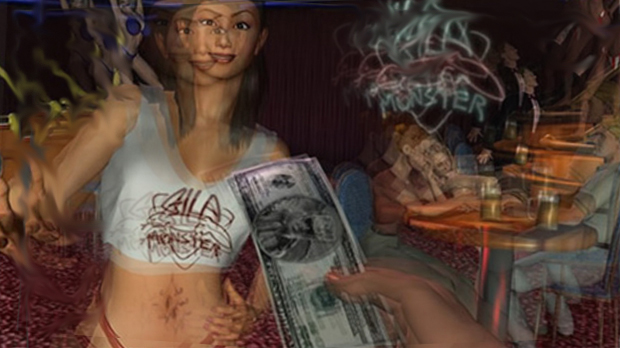 Even with the face obscured, the clerk can mark this one by smell: gasoline and gunpowder and old, tarry sex. He glances at the sunshine pouring through the convenience store’s grimy window, then at his watch.

“S’pushing 7:10, my friend. You fixing to start a Tuesday with all that thunder?”

The figure attached to the arms lets the booze drop to the counter. With free hands, he works the dying cigar into the side of his jaw, pulls the dark sunglasses down a fraction on his nose. The clerk sees bloodshot eyes, red and worn as the man’s tank top.

“How else am I gonna make breakfast.”

The three-block walk from the liquor store to the diner taxes Duke Nukem’s already blunted faculties. His feet swing with mistimed motions, carrying his top-heavy frame off the sidewalk and in and out of the morning’s traffic. The people in cars swerve around him, but just barely.

“I’m not nearly drunk enough for this shit,” Duke slurs to the cheerful married couple on a bus station ad.

The sun glares down on Duke Nukem, angry and unending.

“I’m not nearly drunk enough for this shit,” Duke slurs to the cheerful married couple on a bus station ad. “Hey, you kids want a picture with the Du… Du… HHUUUURBLLEGGGGHH.”

Spitting the last flecks of vomit through a parked car’s open window, Duke bursts through the diner’s doors, nearly knocking a family of four into the two-tiered pie display. Unfazed, he rides his ungainly momentum through the shocked breakfast crowd.

“Watch where you’re going, dick!” the father shouts, prompting Nukem to make an abrupt spin before spilling a pitcher of syrup down the length of his pant leg.

“Hey, you four-eyed family man,” he warbles, strands of phlegm bursting from around his cigar, “the name’s actually D—” 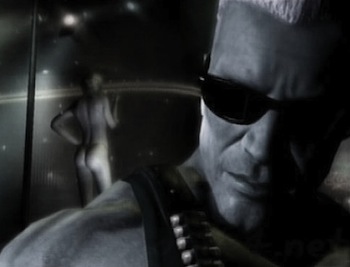 The booming voice of the diner’s owner fills Duke’s throbbing skull. The old man’s bark sobers Duke long enough for him to strut up to the diminutive septuagenarian keeping the counter. Even from his perch on a stool, the man can only glare daggers as high as Duke’s doughy abdomen.

“You’re drunk again, Nukem,” the old man hacks, “and I know you been stealing from me on the regular to get that way.”
“Maybe,” Duke mumbles, patting himself down for another cigar.

“I pay you to unload the trucks every morning, not steal from me, get hammered, and waltz in late and twice as thickheaded!”
“The Duke is entitled to benefits, Stan.”

“You’re entitled to a healthy majority of this old man’s shoe in your goldbrickin’ ass, Nukem! You want I should call your parole officer?”
“I’d like to see you do either of those things after I punt you back to the chocolate factory, shorty.”


“Not in my Gap, you extraterrestrial bastards!”

Hot, pissed, and hurtling toward sober, Duke thrusts a leg through the unlocked doors of the bank. Stepping casually through the shattered frame, he boorishly pushes his way to the front of the crowd. The elderly ladies in line plunk their purses defiantly against his redwood biceps as he passes.

She retrieves a thin envelope from under the desk and slides it across to him, smiling at the disappointment creeping to his face.

“You’re in luck,” the woman says, fishing into her pants pocket and pulling out a middle finger. “This one’s yours, too.” 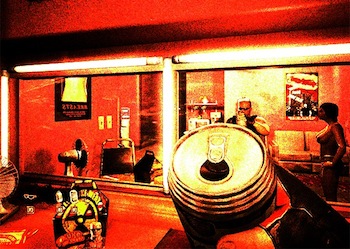 A strange shape catches Duke’s eye as he wanders aimlessly through the mall. Through frosted window glass, he sees nefarious, otherworldly forms, huddling between racks of jeans and polo shirts. Alien reconnaissance, Duke’s predatory mind deduces. The invasion has begun!

“Not in my Gap, you extraterrestrial bastards!”
Not bothering with the door this time, Duke heaves himself through the large plate glass window. As he drags his bloodied body up from the carpet, the group of spiky-haired teens circle above him, snapping photos with their phones.

Cut from glass, and needing to get cut from iron, Duke finds enough change in the mall fountain to ride the bus to the 24-hour gym.

He props one knee up on the bench to admire himself after the workout, extinguishing his cigar in an adjacent lifter’s open Gatorade while lighting another. He glances at the mirror. The figure staring back is a husk of muscle and girth. He smiles. The short man behind him does not.

“Think you can just do as you please, you arrogant prick?” he spits. The man pushes the sports drink into Duke’s face, cigar bouncing at the top like a charred buoy.

Duke says nothing, but snatches the bottle from the short man’s grip, chugging its contents, cigar and all. A moment of silence hangs between them, until the man throws his hands up and walks to the treadmills.

Duke savors the small victory, suppressing the hot pain in his gut long enough to stride confidently out the door before doubling over.

“I can only give you, say, a buck fifty each,” the pawnbroker says, rubbing his scruffy face. From the other side of the counter, Duke scoffs.
“Those are quality fillings, pal!”
“Eh,” the man shrugs. “Gold’s down.”
“From my mouth!”
“Nothing doin’.”
“OK,” Duke mutters, rifling through his bag. “OK, what about this hand vacuum. Bag’s about half full and—“
“Buddy, I’ll give you a buck fifty to leave.”
“Are you kidding?!” Duke bellows. “It’s probably full of fifty-dollar bills and chicks’ digits! You know whose foldout bed this thing cleans?”
“All I know,” the man says, pulling a shotgun from under the counter, “is that I’m giving you 10 seconds to take this clown pitch elsewhere. Nine. Eight.”
“OK, OK!” Duke exclaims, tripping over himself on the way out the door. “But the offer stands!” 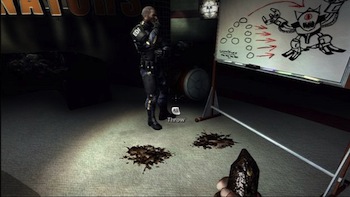 It’s dark by the time Duke finds his way back to the convenience store. Shoulders slumping, he drags himself to the refrigerated section in the back, placing a hand on the glass to steady himself.

“You know, you’re old enough to buy one of those beers if you want,” the clerk calls from the front.
“I shouldn’t,” Duke murmurs. “Late on the rent as it is. I also drank a cigar today, so… I think I’m just gonna sit here awhile.”

After a moment, he pulls a fresh stogie from his pocket, lighting it up as he slouches against the cold door.
“Duke, you know you can’t smoke that in here.”

With a wheeze, the man in red stamps it out on the back of his glove.
“That’s OK,” Duke Nukem says. “Probably time I quit, anyway.”