The wyvern awoke to the morning sun glinting across the many bones and skulls that covered his mountaintop lair. He uncoiled slowly, majestically rising to his hind legs and spreading his wings into the light. Today would be a day like any other, a day of feasting, hunting, and soaring high above the island. For the king of the skies, nothing else would do.

Striding slowly, the wyvern set his senses to work, gathering whatever he needed for the early hunt. He could smell the grey ones grazing in the plains below, such easy pickings, so easily dominated and carried back to the wyvern’s roost. He could also hear the crawlers that shared the back, darker half of the cliff with him. They never picked at his scraps, preferring instead to keep to the mushrooms that grew in the caves below, so he saw no need to bother with them.

Today would be a day like any other, a day of feasting, hunting, and soaring high above the island.

The wind shifted, and new smells wafted into his nostrils, chiefly the odor of the massive horned one who would dig through the barren land the wyvern sometimes flew over, searching for prey. Why was the horned one here, so far from home?

Along with it, a scent he had never taken in before: something that reminded him of the molten land where his brood lay: dark, primal, and angry. Was this a new foe, traveling to stake its claim on a new land? And a familiar scent, the scent of his mate, long lost. But how? And why here?

The realization came too late. The wyvern whirled as the small blob struck his hind, exploding into a pink haze and leaving a large mark on his crimson scales. Two others joined the small ape that had attacked him. Each wore skin and scales that matched the scents he had taken in earlier. The horned one’s remains lay on the shoulders of the ball thrower, and in its hands, a tooth-spitter. He remembered. It could bite at him from a great distance, leaving little gashes in his plates.

In the back, an unfamiliar one stood, covered in ebony plates with green splashes. It held a similarly colored longspike, leaning against it quietly. Its calmness would have made it hard to notice as more than a small mountain built from the bones and armor of its mysterious prey, if not for the pungent scent of these hairless apes that the wyvern now noticed clear as the shining sun overhead. 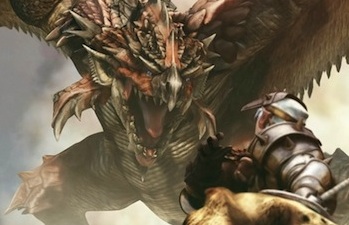 And there was the third, thrusting its massive, stolen talon into the air and shouting “Rathalos” back to its kin. Rathalos, the barbaric sound they had given him. This puny one was draped in the pale green remains that smelled so much like his lost mate, the one the apes called Rathian. Was this the same stalker who had set on her fallen body with tiny hidden fangs, rending her apart for sport and profit? The one who had blinded him with a rock that exploded sunlight, giving the ape time to escape?

It didn’t matter if it was his mate’s killer, or just one who had slain another like her. This puny ape wore the skin of his counterpart, and that gave it the bravery to challenge him.

He would feast on them all.

The wyvern answered the green one’s shouts with a rumbling cry of his own, shaking free rocks from the cliff and rippling the air with its sheer force. The green one and the horned one covered their ears until he had finished addressing them. Then, the hunt began.

The horned one was closest, so it was the first to taste the tip of the wyvern’s tail as he turned sharply to the side. It toppled like the little lizards, his distant kin, who sometimes nipped at his heels while he feasted on a fresh kill. Next, the green one. He rushed towards it, teeth bared, eager to sink into it. The idea of biting through the plates of one of his own was outweighed by his boiling rage. The green one attempted to swing its stolen talon at him. It was slow, cumbersome. The talon seemed to be pieced together from different pieces of his kin. Clearly, the creature hadn’t grown accustomed to its weight. The wyvern was quicker. He bit into his attacker’s shoulder, tossing its body handily to the side with a quick wrench of his mighty jaw.

The horned one’s remains lay on the shoulders of the ball thrower, and in its hands, a tooth-spitter.

The dark one, the unfamiliar one, had circled around back. Its plundering pace, its noisy gait, had gone unnoticed in the wyvern’s anger. It sunk its longspike into his hind, over and over, each strike followed by a searing, blasting pain. He turned, crashing into the dark one, but it held its ground, using the large plate it held in its claw to defend itself.

Coward. So weak. So afraid.

It was then that the wyvern noticed the green slime left behind by the dark one’s strikes. The slime began to harden around his plates, changing hue until it matched his. Then, the cracking pain of the slime’s sudden combustion rocked him to the ground, the force of the blast slicing through his left wing webbing. By now, the horned one had regained its courage, and tore into him with its tooth-spitter. The green one and the dark one set upon him as he rolled around in agony, pain coming from every direction. He couldn’t make out where the strikes were coming from as he thrashed about, trying to find a way out. 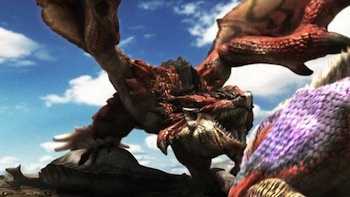 Enough. These vile creatures would never wear his scales as a trophy. He rose to his feet slowly, shrugging off the beast’s blows, and froze them in place with his wind-shattering roar. He took to the skies with a mighty flap of wings, breathing sharply at the ground below. The wyvern’s fiery breath compressed into tight balls with each exhalation, ripping into the ground and exploding with thunderous rage. The hairless apes scattered to their backs, shocked by the raw power of the wyvern’s breath.

Despite his wounded wing, the wyvern hovered effortlessly in the air, the horned one’s angry spitting teeth a mild annoyance as he rained hot hell down on the would-be hunters. Every breath was a blast of hate, every wing flap a buffet of fury. When he finally touched the ground, the calm one, so dark and imposing, lay limp. The wyvern reveled in his victory even as the green one snuck behind him and lashed out with its cumbersome talon, taking his tail clean off at the middle.

A calamitous roar as the pain ripped through the exposed wound. He slumped forward and almost lost his balance. The sensation, the raw feeling of exposed nerves, was a new experience, excruciating. He turned to regard his loss. The small apes had already started on it with their little claws, rending it apart for whatever treasures they thought laid within. They ignored him, as if the fight was already over.

The wyvern’s fiery breath compressed into tight balls with each exhalation, ripping into the ground and exploding with thunderous rage.

He roared again, reminding them that he was still an opponent worth recognizing, still able to rip them apart. He flew again, diving straight at the green one, the unfortunate target of his rage. Pinned to the ground by his girth, the green one could not move as the wyvern crunched down on it, again and again, destroying its precious stolen skin, the taste of his own kind bitter in the back of his throat.

As he was about to land a killing blow, however, the horned one tossed something odd, and as it struck the wyvern’s face, it let loose a scent that frightened and shook him. He let go of his prey and staggered, his vision blurry, sense of smell overcome by a suffocating stench. He forgot the fight and lifted off, slowly gaining enough of his senses back to locate the shallow river below the cliff and head sharply down towards it.

When the wyvern reached the banks of the river, it thrust its head into the thin waters, shaking to clear the searing stench out of its eyes, nostrils, and mouth. With some effort, he was able to see the world again. As his rage returned and he remembered the pain in his tail, he thought about going back up to his nest to finish his hunt. But as he turned, he found that the would-be hunters were already there, waiting for him. How they had found him and tracked him to the river, he could only guess, not knowing the pink mark still present at his backside could be the cause.

The horned one burrowed at the surface like a scared little animal, while the green one ran a rock across its talon, regarding it every so often. The wyvern didn’t care. It was time to end it. 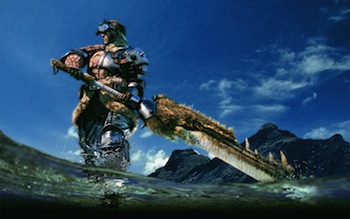 The wyvern charged, meaning to keep the horned one from using its tooth-spitter. But as he passed over the place where it had been working with the ground, he felt the world slip from beneath him. The soft earth that he stepped on now filling in around him, trapping him as he tried to claw his way out.

He thrashed as the horned one threw more of its little balls of sludge at the wyvern. These ones were different. They calmed the wyvern, made it feel as it did after a long day of hunting, right before it rested its eyes for the night. The fumes drifted through him, deep into his lungs. Rest seemed like a good idea, and his struggling slowed. The green one rained down slashes with its talon, but it didn’t matter.  He couldn’t feel them. His rage subsided. Perhaps, once this was over, the wyvern would see his mate.

The memory of his lost partner woke him from his tranquil reverie. This wasn’t the time. Not the place. With one last push, the wyvern broke free of the pitfall, its renewed ferocity affording a new surge of energy.

The horned one didn’t last. A sharp blast of fire, and it floated calmly in the water, unmoving. Only the green one remained. It raised its talon to strike, but it was still too slow. Too confident. The wyvern pinned it to the ground easily, first focusing on the arm that held the angry talon. Then, the rest. He relished the kill, ignoring the taste of the green plates crunching around in his maw. A small bitterness for such sweet revenge.

The wyvern crunched down on the ape, again and again, destroying its precious stolen skin, the taste of his own kind bitter in the back of his throat.

The next morning, the wyvern awoke again, his wing wounds already closing up, reducing the pain of flight. He became acutely aware of his missing tail. Perhaps it would grow back, perhaps not. The balance would take some getting used to.

This time, the mighty Rathalos smelled the hunters before they approached. He turned, screaming at them, not even bothering to consider their tools or which of his kin they wore on their weak little backs. It didn’t matter. It was just another day, just another hunt.

For a moment, he briefly pondered what it must be like for the beasts that continued to harry him, only to be hunted in turn. What went through their minds as they decided to take on such an imposing foe as he? He dismissed the thought, setting upon them with hot breath.

What kind of thoughts could such savages possibly have?

From the Journal of an Accidental Mayor: Day 24