In retrospect, of course, I acknowledge it was all a mistake.

I was blinded by a limited hope that was so reliant on a specific kind of timeline and outcome that I never stopped to consider other options. I spent years rewinding simple mistakes, falling upwards out of pits I had gotten myself into. I spent months wishing away regrets, sweeping hurtful words under the rug until I led myself back to her yet again.

I was so afraid of hurting her, of telling her the truth of my prior present timeline, that I started to rewind again.

I remember feeling a lump in the pit of my stomach with every moment of progress. Every key I discovered, with its telltale Pavlovian tinkle, triggered within me a twisted desire to march forward toward my own altar where I’d be sacrificed. I was prepared to be hurt. What I didn’t anticipate was the humiliation.

Most of all, I remember feeling so relieved at the realization that I could take it all back – the button I could press to rewind, to run further backward into the known. I remember the cathartic feeling of my feet hitting the pavement, toes first, then the ball of my feet, then the heel. I felt my core drift further and further back as my feet flew forward, upward, and then back down again. I ran for what must have been 15 miles and seven years until finally I reached the beginning of my nightmare, lay down in my bed, pulled the covers over my head and went to sleep.

My first impulse, this time, was to sleep through those ill-fated seven years. It would be impossible to repeat my previous mistakes when my face was buried deep in the memory foam pillow. But when I opened my eyes, the left covered by fabric and darkness, the right enveloped by radiant light, I was restless.

I decided to give the next seven years another try.

I set foot onto the same grassy ledges I had traipsed so carelessly over before. I stopped, looked up, and breathed in the air. In the distance I heard a violin play a familiar song and realized that the somber dirge I had previously despised because of its lack of resolution now felt more like hope than despondency.

Without hesitation, I jumped off the cliff and into a pit with a dejected, funny-looking man who knew nothing but to wander around with a key in his pocket. Rather than destroy him with my carelessness, as I did in my previous journey, I merely looked him in the eyes. “Looking for this?” he asked. “Yes,” I said, as I took the key. Then I pressed that familiar button, took it all back, and passed him by completely. He never knew I was there.

I approached another funny little man. Then I panicked and killed him. I felt a tinge of recognition and regret. I had been here before. I had done exactly the same thing. Another little man approached and I killed him, too. I hammered on the rewind button, found myself standing on grass that was no longer defaced by blood and greeted a funny little man walking in my direction. 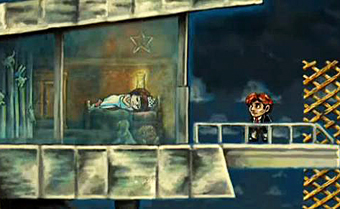 I stifled my contrition, greeted him, asked him if he knew where I could find a glistening yellow key and followed his directions. I walked through the door and continued my journey.

Every time I found myself at a loss, I began to ask for help. I found a world full of people on a journey just like mine. People who seemed at first to be walking back and forth aimlessly, I realized, were actually just stuck like me. We were all searching for some way through that damn door. Eventually, we would all find it and walk through together, cheering all the way.

Every new person slowly transitioned in my mind from a new threat to a new hope, an opportunity to embrace and be embraced. When I approached them, they followed me, or I followed them, or we walked together. Either way, we had a common purpose, and we pursued it together.

Occasionally, I would hurt them. I would make one of these people (I called them brothers and sisters now) feel pain, and I would instinctively hold down the button and attempt to make it better. Once, I forgot about the button. I wept openly, expressing such regret, such utter disappointment in myself after betraying them. I felt myself emptying before them, and saw them draw nearer to me.

Eventually, I forgot about the rewind button.

With expediency, we marched together through these barriers that seemed so impervious in the past. I found myself marveling at the beauty of this place we were in, the kindness of the people who were in it and the incredible way in which it seemed to have been made for me. I saw ruins of old structures, covered with new and vibrant greenery. I saw sunlight bursting through dark clouds. This place had become a reminder of my own fallibility, my own potential to influence those around me for good or ill. This was where I belonged. 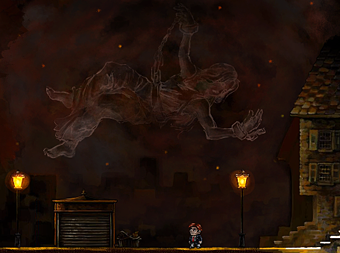 As we reached our destination, I felt the crowd fade away and saw her there – only I no longer recognized her. I saw her face and felt calm. She greeted me, and I felt warm. She walked toward me, and I panicked.

Regret rushed into my mind like a geyser, and I felt habitually inclined to take it all back. I was so afraid of hurting her, of telling her the truth of my prior present timeline, that I started to rewind again. I held on to that button for so long, felt my feet swiftly hitting the pavement, toes first, then the ball of my feet, then the heel. I remember passing through crowds of frozen happy faces, the way they seemed to see me, impossibly, as I passed by in reverse. Most of all, I remember her chasing after me, and that somehow, through some supernatural force, she caught up to me, turned me around and, suddenly, we were running forward at full speed, the wind blowing in our hair, the crowd behind us cheering us all the way.