My wife, Alexis, makes lists. It’s her way of planning, staving off worry. It doesn’t always work. People who know Alexis know that her knitted brow often mutates into a scowl. She’s not mad, just thinking about all the shit that needs to get done, worrying about whether it will get done and fearing the consequences of failing to get said shit done. You’d frown too.

So, part of Alexis’ ritual is to make lists. She keeps dozens of notebooks full of things to do and stuff to buy. Before our son Halford was born, Alexis kept many lists. When she wasn’t jotting down her plans, she was reading and rereading the virtual stack of pregnancy books on her Kindle. For Alexis, planning is a kind of prayer – a way to find peace in preparation.

For Alexis, planning is a kind of prayer – a way to find peace in preparation.

The week before Hal’s early arrival, my wife had already set her Animal Crossing affairs in order. Our Wii, now banished to the bedroom, serves only as a portal to our shared town. I have long since stopped tending my abode, so Alexis ventures into my crypt to stomp on all the cockroaches while my slumbering avatar rests, corpse-like, in the attic bedroom. While I have been away, Alexis helped perfect our town – planting the optimal spread of trees. But her reason to turn the Wii on every evening was to tend her many rare flowers – keeping them watered and arranging them so that they’d breed more of the hard-to-come-by gold and black variants.

We were still a month from Hal’s due date, but Alexis couldn’t leave anything to chance. She turned on the Wii and methodically picked every one of her prize flowers, mothballing them in storage so they wouldn’t wilt and die. And there they remain – since Halford has joined our family, Alexis hasn’t slept in a bed (mom and son cuddle on the couch every night), let alone dusted off her Wiimote. There’s a chance those flowers may never see the light of Animal Crossing day again. Next week, I’ll sneak off to Target at opening time to buy Alexis a snazzy, multicolored model of the 3DS with Animal Crossing: New Leaf pre-installed. That means a new town, a new house and, for Alexis at least, a fresh start on her horticulture. 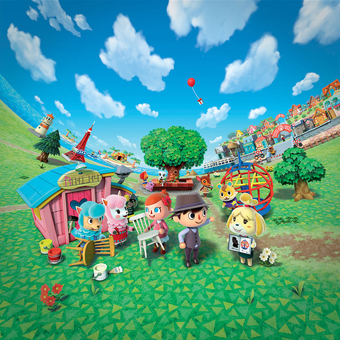 Today, I just drove two hours east to Indio – another, I would say, nice part of the Southern California desert. I went to scope out neighborhoods since we hope to move there for Alexis’ new job next month. I’m not a list keeper. I am more grasshopper than ant (I’m glad we have one ant in the family). I tend to go by feel. So today’s drive was an effort to get a kind of psychic read on the place we’d be moving to. I’ve been trolling Craigslist and bookmarking places that look interesting. I didn’t visit any of those posts today. Rather, I do what I always do when looking for a place to live. I drove up and down the streets. When the mood struck me I climbed out of my car to record a movie or take a picture. I wandered into a grocery store and asked the clerk if it was a nice place to live. In the somewhat remote city of Desert Hot Springs, I decided to try to drive to the highest possible point I could find. The bottom of the hill was characterized by a familiar kind (at least to me) of desert squalor – lots of bleached, crumbling asphalt, sand-swept ruins of ill-advised businesses and haggard pedestrians who looked like they might shoot you for a taste of your AC.

Elevation, of course, brought gradual change. Until, at the highest altitude, motorboats gleamed in front of multicar garages. I turned the corner at the highest roundabout I could find and discovered a “For Rent” sign – 3b/2b and within our price range. I snapped a shot of the house and of the view we’d enjoy from our back porch and set off into the desert again.

Flying by the seat of your pants doesn’t always pay off. I have a bad habit of slamming my 3DS shut rather than saving and quitting the game. I once lost dozens upon dozens of hours in Final Fantasy Tactics A2 for such laziness. And last night, after a day of solid work in Animal Crossing: New Leaf, I accidentally hit the power button, erasing every bell earned and fish pulled from the sea for at least a day. It wasn’t a catastrophic error, but it is the kind that comes to people like me just often enough to make me wonder if I shouldn’t be more of a list maker.