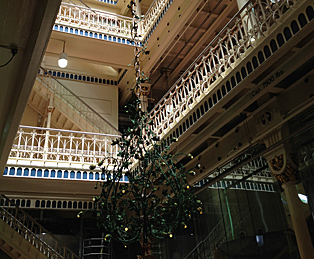 I was going to bitch and moan about the ending of BioShock Infinite this week, but something happened to me midway through writing my column:

I took a tour of the Anheuser-Busch brewery in St. Louis.

And all I could think about, the entire time, was how the place where they make Budweiser, arguably the world’s shittiest beer, could very easily be the setting of the next BioShock game.

And don’t change a thing about the brewery itself.

From the overly ornate and chandeliered Clydesdale stables, with its stained-glass windows and polygonal shape, to the large vats where the beer is “beechwood aged,” to the 19th century patriotic portraits, to the richly tiled walls, latticed railings and vintage elevators, the place felt like Columbia if it couldn’t fly. And after taking a long set of escalators, with Anheuser-Busch medallions along the handrails, the bottling line appeared through a wide set of windows and it felt as if Jeremiah Fink himself was running the show.

I took some photos, which I’ve sent along to my editors, leaving it up to them which ones to choose. There’s a shot of the brewery’s 150-year-old exterior that could, admittedly, be used in any number of games, from Arkham Asylum on down, to the giant lighted Budweiser sign atop the bottling plant to the neon logo on the ancient fermentation tank to the portrait of Lady Comstock Liberty or whomever she is, lighting the way to truth, justice and the American way. 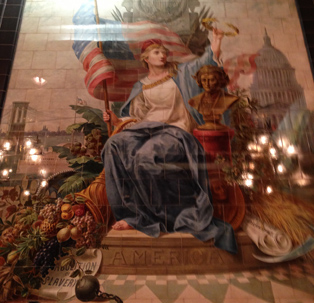 None of the pictures I took give the place its proper due. I didn’t even send the blurry photos of one ornate room, where behind a glass display we were introduced to the Anheuser-Busch “Family of Beers” – I could almost hear an animatronic voice offering me a pint at a deep discount or perhaps envision what the View-Master newsreel footage would look like on the day of Adolphus Busch and Eberhard Anheuser’s daughter Lilly’s wedding in 1861.

I know what you’re thinking: Dude’s been playing waaaay too much BioShock.

Fine, I accept that (although one of my gripes is that BioShock Infinite is too short).

But don’t accuse me of drinking too much. The free beer tasting afterwards, while appreciated, contained brews just about as foul as what Father Zachary Hale Comstock would have wanted the Vox to swallow.

Matt Marrone has taken the Sam Adams brewery tour at least twice and plans to do so again really really soon. You can follow him on Twitter @thebigm.

Rookie of the Year: Three Strikes and I’m Out