There is a moment in Pauper’s Drop, the fourth level of BioShock 2, where you unlock the door to a clinic. Climbing the stairs I felt confident in what I was going to find. I’ve been interested in level design since the era of Duke Nukem 3D, and so far BioShock 2 had been conforming to a hub and spoke model of spatial design I was familiar with from many games.

I knew what was about to happen; at the top of the stairs I would find a way to access the adjacent building – location of King Pawn and my current objective. There would maybe be an extra room containing consumables and an audio log. This was the end of a spoke and once I was done here I would return to the hub to access and explore a new location.

BioShock 2 is a work of more subtlety than its nature as a “quick buck” sequel would suggest.

Instead the stairs ended in a room with two exits. Exploring lead to the rooftops of the surrounding buildings, and to walkways and hidden rooms with no end in sight. What I had been certain was a predictable layout dissolved in front of my eyes, there was much more here than I had any reason to expect.

That room and the discovery that lay beyond is my favorite part of Pauper’s Drop. What seems obvious on the surface is hiding a web of interconnected passages and backrooms. There is more to be seen if you dig below the surface than you would suspect from a cursory glance.

It is a metaphor for BioShock 2 itself, a work of more subtlety than its nature as a “quick buck” sequel would suggest. Stumbling over walkways between rooftops and through a decaying apartment building I had changed from a visitor with a clear objective to an explorer rummaging through the private spaces of Rapture. I was an inhabitant, no longer simply an observer.

As somebody who designs levels it was a revelatory moment and that my understanding of the spatial relationships could be altered so suddenly made me uneasy. I had to understand how that had been achieved. 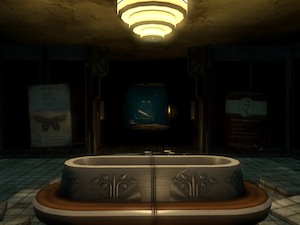 I’m not a bad level designer, though I’m not a great one either. I’m stuck somewhere within that classic Ira Glass quote. I know what good design looks like, and I know my work isn’t up to that quality but I just can’t quite close the gap. I’ve thrown out more partially finished levels than I can count. I’ve kept almost as many on USB sticks for years because some part of me knows there is something that makes them worth continuing, I just can’t put my finger on what it is yet.

When Pauper’s Drop opened up before my eyes, fundamentally changing my appreciation of the space, it was like staring into a void; the gulf between my own skill and that of the people for whom it is a profession. It convinced me I’d never be that good, and when that sensation eventually subsided it left me desperate to try even harder; more than just that, I wanted to explain it to other people. This felt important – as important as anything related to videogame design ever is.

Albert Einstein is purported to have said, “If you can’t explain it simply, you don’t understand it well enough.” In that spirit I strove to understand the work that went into creating that one moment within Pauper’s Drop by attempting to explain it. I played and replayed the level, I made notes, I struggled to form those notes into a coherent whole; thus began the series I call Groping the Map. 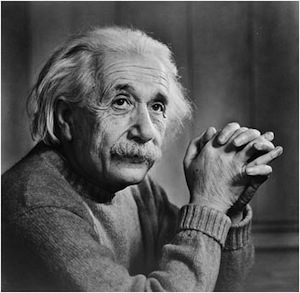 I can close my eyes and run through levels I’m working on ­­– or ones I’ve played – without being anywhere near a computer. I’ve spent over a hundred hours with Dishonored, written more than twelve thousand words on its level design and I’m still not convinced I understand why that aspect is so strong. I’m getting there though, the more I write the more I’m inspired to create and the closer I come to sealing that gap.

At this moment I can think of 15 levels I believe are worth examining in detail. Fifteen levels I believe myself and others can learn from. At my current pace that is a 15 year endeavor. Such a rate does a disservice to the quality of the work I’m examining, so I’m trying to see if I can focus all my efforts on a subset. Four levels that represent some of the best first-person levels ever created. With the help of the community through GoFundMe, I plan to write a book about those four levels, what makes them great and how they compare to each other. I’m writing a book because I believe there is something to these levels, to the very act of level design itself that deserves to be acknowledged.

There is a light in Pauper’s Drop that isn’t aligned correctly with the model that is supposed to be emitting it. Instead of being positioned beneath the model, as it is elsewhere in the level. This light is several feet higher, giving the impression that the model is glowing from within. It is impossible to miss once you know where to look; I could load the level now and walk straight to it.

Discovered after hours of analysis, that awkwardly placed light is secretly my real favorite part of Pauper’s Drop. I don’t know if it was supposed to be positioned lower and its current position is a mistake, or if it was decided that the model looks correct and the light works best coming from a higher position. Honestly I don’t care to know. Whatever the reason, the existence of this light reveals the human hand behind the game world. 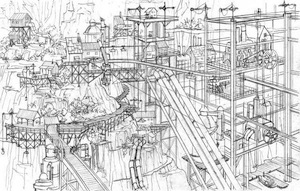 Accident or willing acceptance of imperfection, I’m fine with either reason because both are so utterly human. Somebody placed that light. Somebody created the 3D model from which it is now emitting a green glow. Each part of Pauper’s Drop, from the buildings to the Splicers to the audio logs were all created by someone.