Unless you’ve been living under a rock (or have real things to worry about) you know that the venerable game maker Nintendo has been having trouble making money lately. Now, I’m not a financial analyst. And I’m not really an expert on the Japanese game development or hardware business either. In fact, I’m not even that huge of a Nintendo fan any more. I kinda don’t like those Super Mario Galaxy games. BUT! I did beat Super Mario Brothers 3 back in the day (and I have a column due) so I’m pretty sure that makes me qualified to opine on this complicated topic. So here goes.

Nintendo should put games out on iPhones. Because lots of people have those. I guess they should put them out on Android phones too. Because, like, even more people have those. I bet if you counted everybody in the world you’d still find that most don’t even have phones at all. Like all the poor people and stuff. So maybe Nintendo should think about putting their beloved games out on whatever that is. Like the absence of a phone. I am not sure how that would work. But Nintendo is good at innovating so they’ll figure it out. 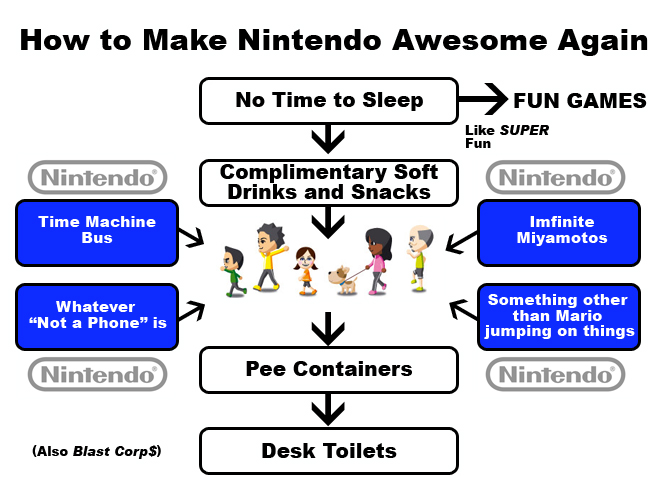 And while Nintendo is at it they should put out games on every other console. Done. Problem one solved.

Okay, next they should put out LOTS of games. Like tons of them. And they should be good. Like super fun – the kind that you play all day and when your friend calls and asks what you’re doing you say, “I’m playing this super fun Nintendo game!” And they’re like, “Hahaha! Me too!” I think maybe a hundred of those a year would be good. If they want to make more that’s cool, but they should really get on that because it takes a while to make games, I heard, so like if people are sleeping, Nintendo should probably wake them up and tell them to start cracking. Nintendo should probably provide snacks and caffeinated drinks so people don’t have to leave their desks too much. If Nintendo was smart they’d give their employees empty bottles to pee in so they don’t even have to get up to go to the bathroom. For women that might be kind of tricky. So Nintendo should probably install toilets in front of their desks so they can just sit there and tinkle while they’re putting the finishing touches on the next Advance Wars game.

Quality is important. And if Nintendo really wants to sell cartridges (and discs) like hotcakes, they should make their new games the best of the best. Like so good that they get four tens from Famitsu. And the only way to guarantee that games are good is to get the best game designers. That’s why Nintendo should build a time machine and go back in time to find the best people who ever made games for Nintendo. It would have to be a pretty big time machine because there were so many good Nintendo games back then. So maybe the time machine should be a bus. At the very least it should be a very big SUV.

Nintendo should be very careful to make sure that Shigeru Miyamoto from the past doesn’t meet present day Shigeru Miyamoto. Because such a meeting could cause a tear or something in the space-time continuum. They also shouldn’t meet because old Shigeru Miyamoto might see young Shigeru Miyamoto and feel bad about how he got kind of old and wrinkly. Also, young Miyamoto might see old Miyamoto and go, “Whoa, I’m still making games at the same place, in the same office in the future? I don’t have other adventures? And then he might get sad and that might make all of his awesome video game ideas go back into wherever they come from. And we don’t want that! We want all the awesome new ideas to flow like the money that the Nintendo DS used to print. So keep young Miyamoto and old Miyamoto in different parts of the office, Nintendo.

Nintendo should probably come up with a code for when old Miyamoto starts walking around the office so that people know when to hide young Miyamoto in the closet. It has to be better than announcing, “OLD M is on the move!” over the P.A. system because both Miyamotos are pretty smart and they’ll know you’re onto something. The code could be really obvious coughing or something. I don’t know. Again, Nintendo is super good at innovating so I am sure they will come up with a really clever code. Maybe get the Intelligent Designs team on that. They are good at thinking outside of the box.

And finally, while Nintendo has their time machine all fuelled up they should go pick up all of the old Rare team from old-timey England and have them make a new Blast Corp$. Because that game was rad.