“Right naow Barnabas is abaout changed. Can’t shet his eyes no more, an’ is all aout o’ shape. They say he still wears clothes, but he’ll take to the water soon.”

When Captain Obed Marsh made his deal with the devil, he didn’t sell his soul; he sold something infinitely more insidious: his lineage.

Marsh’s bargain is an integral part of H.P. Lovecraft’s classic horror story The Shadow Over Innsmouth. In it, Robert Olmstead travels to the titular New England coastal village, a decaying, half-abandoned place inhabited by furtive fishermen. Olmstead discovers that, nearly a century prior, Marsh trafficked with a race of fish-frog creatures that lived in an underwater city off the coast. In exchange for gold and plentiful fishing, Marsh allowed the creatures to interbreed with the town’s population. The modern townsfolk are hybrids of that union and will eventually transform into something like their fishier forebears and return to the sea. As they aren’t above human sacrifice, they are displeased that Olmstead learned their secrets and, in a truly terrifying sequence, they take to the streets at night in an attempt to capture the interloper. 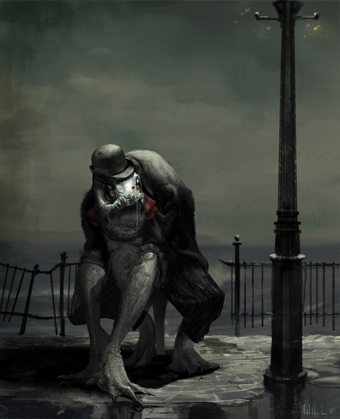 Olmstead barely escapes and he informs the government of what he found at Innsmouth. In the resulting federal raid, the degenerate townsfolk are rounded up and never heard from again, while the sinister reef off the coast is detonated with depth charges. All’s well that ends well, except that Olmstead learns in the story’s final pages that he is the great-great-grandson of Captain Obed Marsh. He is the product of the same interbreeding as the people of Innsmouth – he will soon be a fish-frog man himself. He is left with a final decision: transform and return to the sea, or put a bullet in his brain.

The horror of The Shadow Over Innsmouth works on several planes. Olmstead’s escape is every traveler’s worst nightmare – alone in an unfamiliar place, attacked in his own hotel room and hunted through the streets by degenerate cultists – the threat of bodily harm and death is more than apparent. That the townsfolk are monstrous hybrids is beside the point until Olmstead learns he is one himself. He was mistaken about everything that he thought he was, down to his cellular structure. He is an obscenity, not as a consequence of his own actions, but because of the capricious nature of fate and genetics. And then there is the faint implication that he is not an obscenity at all, that he might have found greater meaning in that impossible city beneath the waves, had he not betrayed his people.

All of this is made more powerful by the fact that, in reading the story, the main character is actually unnamed – Lovecraft used the Olmstead name in drafts, but removed it in the final version. The point is chillingly clear: it could happen to anyone.

It is a common misconception that Lovecraft was a closeted homosexual and of all his stories, The Shadow Over Innsmouth seems particularly apt to be read as an allegory of a secretly gay man struggling with his own sexuality and unaccepting social conventions. It is much more likely that Lovecraft was asexual – his wife and friends describe him as being mostly oblivious to sexual impulses.

Lovecraft wasn’t afraid he was gay, he was afraid he was insane. His mother and grandmother both died in insane asylums. His father, a traveling salesman, also succumbed to insanity but of a more venereal kind – he contracted syphilis from a prostitute in Chicago. Lovecraft spent his entire life under the shadow of his own potential madness.

What must Olmstead have thought while he gazed into the mirror as the change began to alter his features?

This kind of inherited doom is a common theme in Lovecraft’s work. Arthur Jermyn’s ancestor took a wife from a tribe of albino ape people. Baron de la Poer comes from a family of cannibals. Charles Dexter Ward is a victim of his Colonial-era ancestor’s sorceries. Less supernatural degeneracy was no less dreadful – witness the inbred Whatleys of The Dunwich Horror and the troglodytic Martense family in The Lurking Fear.

What must Olmstead have thought while he gazed into the mirror as the change began to alter his features? Dreams assailed him, of “gardens of strange leprous corals and grotesque brachiate efflorescences.” His eyes grew larger, more watery and unblinking. The rash at his neck began to open into the gasping slits of gills. From endless non-Euclidian gulfs, a cold universe filled with things beyond his knowing was whispering to him in its eldritch, consonant-heavy tongue. Its message:

Never fuck a fish, no matter how much gold it offers you.

Stu Horvath has listened to nothing but albums by The Darkest of the Hillside Thickets for the last several days. Follow him on Twitter @StuHorvath as he transcends the starry gulfs of space. Also, watch this clip from Mr. Show, courtesy of Gus Mastrapa.