I am sitting on a large rock overlooking the Atlantic Ocean, on the coast of Gloucester, Massachusetts. The vast grey sea spreads out before me as the sun sinks at my back, the black waves a constant, rhythmic undulation. For a while I stare, hypnotized, until a flash of dark movement and the froth of a splash snaps me back to attention.

The coast here is an unruly pile of massive granite boulders. When you climb through them to get up to a good perch, they seem ancient and immobile, but the decades of visiting here have taught me that the coast is always changing. Storms lift and slide the rocks. Cracks shear. Every year it is the same, yet different. I have sat on this particular boulder more times than I can count, though, and I am sure there are no rocks high enough to come into view as the tide pulls back before crashing in once more.

From giant squid to Nessie to the nuckalevee, if it swam and was terrifying, I was interested. But mostly terrified.

There are cormorants swimming about, hunting for their evening meals. With no oils in their feathers to repel water, you can often see them sitting on the rocks, wings upraised, drying themselves out in the sun. When they are on the water, though, their necks have a serpentine look that accentuates the sinister curve of their beaks. They are deep divers, propelling themselves up to 150 feet underwater to the ocean floor to snatch unsuspecting fish. They disappear from one spot in a blink, only to surface several yards away, head feathers disheveled, a malign glint in their eyes.

It could have been a cormorant that made the splash, but they seem too small, and too graceful.

What then? I stare at the spot, waiting for another clue, but nothing is revealed. It is growing dark, and my nerves get the better of me. I clamber down, away from the water.

There are a lot of things that inform my unease of the sea. For as many decades I have been visiting Gloucester, I’ve also been reading the stories of H.P. Lovecraft, where there are no shortage of creatures lurking under the surface to grab the unsuspecting. Gloucester and the other fishing towns on the North Shore served as Lovecraft’s inspiration for beshadowed Innsmouth, so it isn’t surprising that I’d have Deep Ones on the mind.

Before I discovered the fiction of Lovecraft and friends, I grew up on a steady diet of non-fiction books devoted to accounts of strange sea creatures. From giant squid to Nessie to the nuckalevee, if it swam and was terrifying, I was interested. But mostly terrified. This is how I first learned of the Gloucester Sea Serpent.

It was first sighted by a European in 1638. When the man made to shoot it, his native guides warned him off, explaining that if it was not killed outright it would likely sink their ship and kill all aboard. Since then, similar creatures were sighted intermittently until the early 19th century when it was observed by hundreds of people as it frolicked in near Ten Pound Island, in the middle of the busy commercial fishing harbor. All accounts agree on the creature’s appearance – more than 60 feet long and coiled like a snake, with a horse-like head. 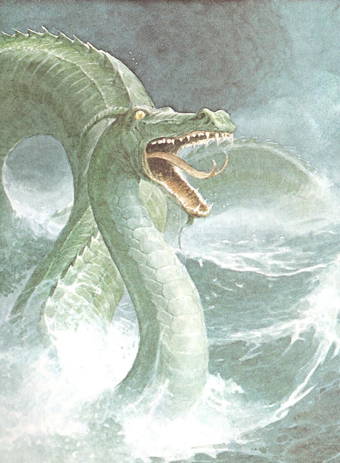 The creature was spotted regularly in the summer months for decades, but sightings dropped off in the 20th century. The last reported sighting was in 1967. Cryptozoologists and the authors of books devoted to local legends speculate that the serpent followed seasonal fish migrations, and that overfishing has forced the creature to find other food sources away from the Massachusetts coast.

Many years ago, I took a boat tour that circumnavigated Cape Ann. I did it partly out of a genuine desire to learn the history of the place from an unusual perspective. I also did it in hopes that being out on the water would afford me a glimpse of the serpent. The tour guide, of course, mentioned the creature and gave us his own explanation for the lack of recent sightings – that a local fisherman had killed it accidentally by passing over it in a motorboat.

I still hold out hope of catching a glimpse of the serpent. In fact, whenever I see the ocean, I think there is a pretty good chance I will see something monstrous rising out of it. Judging from how my brain reeled at seeing whales on the open water, witnessing a genuine sea serpent would probably do some serious psychological damage, but I hope nonetheless. A world with sea monsters may be frightening, but it is also a whole lot more interesting.

There is a section of the coastline here that forms a small cove dotted with jagged outcroppings of rock. Sometimes, when the tide is high, water is sucked rapidly in and out of the narrow passages formed by those rocks and the surface tension flattens out all the turbulent water. Sometimes, this looks very much like the coils of a massive serpent twisting itself among the rocks.

Sometimes, air and water mixes in submerged gaps between the rocks, making a fleshy slapping noise.

Sometimes, when the air is just so, the sound of a ship’s motor on the distant horizon carries like a secret in a whispering gallery, surrounding you with plaintive, disembodied roars.

Someday, one year, perhaps, I won’t have such reasonable explanations for the things moving in the dark water.

The Storm is Coming

Scenes from a Pinball Tournament in North York