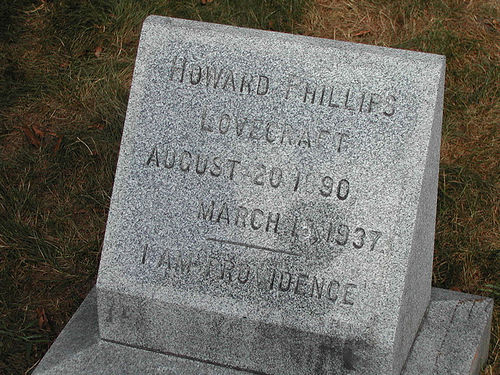 “Now that time has given us some perspective on his work, I think it is beyond doubt that H.P. Lovecraft has yet to be surpassed as the Twentieth Century’s greatest practitioner of the classic horror tale.”

It’s doubtful that anyone who comes to this site will be unfamiliar with the works of H.P. Lovecraft in some shape or form. Sometimes finding out how someone came to know Lovecraft’s work is a hilarious experience. For example, I got my first taste of the master of the bleak and macabre universe of hovering dread through the Saturday morning children’s cartoon The Real Ghostbusters (“The Collect Call of Cthulhu”). Lovecraft’s writings, and sometimes more specifically his “Cthulhu Mythos,” have inspired a wide dearth of popular culture from metal bands to big budget movies. How does a marginal pulp horror writer so thoroughly infiltrate the mainstream?

It’s because he brought something new to the table. He brought new perspectives to an art. He used the trappings of stories we’re all used to; the Gothic romance, the ghost story, the horror tale, but he infused it with a kind of stolid, almost scientific, realism that was hard to shake. He was all about building atmosphere, and his goal was always to make the reader unsure of the reality of the tale they were reading. He used cutting edge science of the time, oft-times invoking a sort of proto-quantum physics along with ancient magical rites to make fantastic events seem plausible. He mixed real places in with imaginary ones to give his settings a sense of the real. When he did make something up from whole cloth, he gave it a fictional pedigree which mixed fantasy and reality so well that even to this day there are people who aren’t sure of what’s fact and what’s fiction. A perfect example of this is the infamous and dread tome, The Necronomicon. Yes, it’s fake. His monsters masqueraded as gods, but were really strange aliens that descended to Earth in pre-history, creatures beholden to a science so ancient and advanced that it appears to be magic.

His sense of horror was not only in the physical terror that these beings represented, not in mankind’s fear of falling prey to a single beast, but of falling prey to the yawning apathy of the universe. Cthulhu’s tentacular madness is one thing, but the true villain was Lovecraft’s fictional outlook on the universe; the belief that there are powers far greater than mankind that would never even notice as they swept through the void, destroying solar systems in primal, idiotic serenity. Just to show the scale of even the basest manifestations of the Old Ones—Lovecraft’s term for his banished or dead, but dreaming ancient entities—he writes “Great Cthulhu is Their cousin, yet can he spy Them only dimly.” In his brilliant essay Supernatural Horror in Literature Lovecraft describes his philosophy behind the weird tale: “The true weird tale has something more than secret murder, bloody bones, or a sheeted form clanking chains according to rule. A certain atmosphere of breathless and unexplainable dread of outer, unknown forces must be present; and there must be a hint, expressed with a seriousness and portentousness becoming its subject, of that most terrible conception of the human brain–a malign and particular suspension or defeat of those fixed laws of Nature which are our only safeguard against the assaults of chaos and the daemons of unplumbed space.”

Many will attempt to discredit Lovecraft’s obvious talent in two ways. One: his overwrought prose. The man loved adjectives, often piling them up, one right after another in a single sentence. What a reader must remember in regards to Lovecraft’s writing is that above plot, above characters, he’s attempting to build atmosphere. Every sentence serves to build upon the lurking, incomprehensible dread of pulling back the curtain upon things man was not meant to know. The second is to invoke his racism. This is something many Lovecraftians will scramble to apologize for, and is something that’s impossible to apologize for. He was, indeed, racist. It’s striking, though, that such an understandably intelligent person would fall prey to such ignorant ideas; but remember that he was writing during a time when the “science” of eugenics in America was all but “proving” that some races were inferior to others. In fact, America’s eugenics program was considered so effective that it was later adopted by Nazi Germany. Still, there’s no excuse for any right thinking person to have racist beliefs, and his fear of the alien, of the different and of the strange play to good effect in his stories. An idiotic personal belief system shouldn’t detract from a person’s body of work. However, I do feel compelled to mention that as he grew older, and perhaps more wise, his view towards different races began to soften, and became a more cultural bias over a biological one.

Never read any Lovecraft? Here are a few stories to get you started:

Collaborations:
“The Horror at Martin’s Beach” w/Sonia Greene (Quite possibly one of the weirdest tales I’ve ever read)
“The Curse of Yig” w/Zealiah Bishop

If Lovecraft’s prose is something that you find difficult to navigate, I’ve found that his work adapts very well to audio book. Try The Dark Worlds of H.P. Lovecraft audio book series, they’re pretty amazing.

Want to learn more about Lovecraft, his stories, and his life? Try the H.P. Lovecraft Literary Podcast.