I’m sure by now you’ve read some thought-provoking stories about GDC. They are all right. It is not just a show, but an event. A life event. It’s a crossroads for many, from the developer to the journalist to the student to the smallest denominator. I’d like to think my journey during that week was a bit different from most. Through the many folks I had a chance to speak with, I could easily identify with their plight and hope: getting paid to follow their dreams. We all want that, but sometimes we succumb to banality for comfort and complacency instead of taking a leap of faith.

I can’t thank Stu Horvath enough for inviting me on this trip and for being a part of Unwinnable’s Broadcast Network. I produce the podcasts, which has given me a great deal of experience I will carry with me forever. I went to E3 2012 to be a part of the film crew for Unwinnable vs. E3 2012 and it was an amazing experience. As a fan, it was great to be at a show that was, to the average person, the Super Bowl of gaming. I can see how my cohorts, especially the ones who rely on covering the show to get paid, can become disillusioned with such a circus. It’s one giant marketing ad. GDC is different.

We all want to follow our dreams, but sometimes we succumb to banality for comfort and complacency instead of taking a leap of faith.

For GDC, I was originally supposed to act as second camera to our pal Johnny Celentano, but I only shot a minimal amount of footage – instead, I mostly served as the sound man. Johnny and I were together most of the show and, most of the time, Charles Moran rounded out our trio as interviewer. It was an outrageous experience seeing those two in action. I could see when Johnny had that sparkle in his eye, framing the next shot of the movie, acquiring the appropriate sound bites and assembling a scene in his mind. He was in his zone and it was a very powerful learning experience.

Meanwhile, Chuck may not know it, but he displays the 3 C’s for the camera (charisma, competence and confidence). He puts people at ease, which can be a challenge when you are interviewing humble and introverted creators. I would have a tough time standing in front of a camera and asking a complete stranger a series of questions like “What did you have for breakfast?” or “What is your longest time in Super Hexagon?” I’m a behind-the-scenes guy, but Chuck pulls it all together way out front.

I often question my life choices – from my days of being a closet addict to my darkest depression to my decision to follow my dreams of a career in art. I had to overcome a great deal of bad habits, bad choices and regrets to turn things around into a positive light. I rarely get an affirmation that I have chosen the correct path. Life becomes confusing. 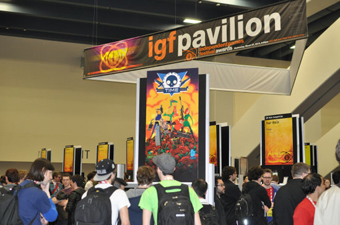 We were following Stu in the IGF pavilion where I had a talk that gave me hope. We were making the rounds, checking out the games that were up for awards, and we made our way over to Kentucky Route Zero, a game I’ve been hearing about for a while through Twitter, Facebook and various podcasts. The developers were not at the booth, so instead we were greeted by the game’s composer, Ben Babbitt.

I got to talk to Ben about his approach. I don’t always care to hear about the artist’s journey. Not to sound insensitive,  but I am more concerned with the technical jabber – I want to learn. Ben was very cool and shared with me some of his techniques. He played some of his arrangements on a broken Wurlitzer, which I can only assume through my own experimentation lends itself to some unique sounds, and he recorded music for a specific game sequence on an organ in a church. The sound must have been grand during his sessions. He also discussed recording to old tape reels for that period-correct bluegrass feel. This is obviously someone who loves music and loves what they’re doing.

He brings up the use of guitar effect pedals and keyboards, a method I have been practicing since the early ’90s. I asked him what pedals he uses and he pauses. I would too. Like many artists, I don’t want to give away my secrets. He tells me a few items and I profess my love for delay. That was my first GDC moment. It’s the one that gave me hope. It was an affirmation that I’m doing the right thing. I’m sacrificing for a greater good. It put me at ease. It was inspirational.

Before I left New Jersey, weeks before, I thought this would be the perfect opportunity to record some new music and hand out some demos to developers. I worked on 10 songs on my days off, after work, whenever I had the chance. It was mentally grueling. I bought some key-shaped flash drives and dubbed the project Key to Eternal Darkness. It contained an EP of 7 songs that were my soundtracks to imaginary games. I had to muster up the guts to find the right moment to hand these out. I only had 5, so I had to make it count. 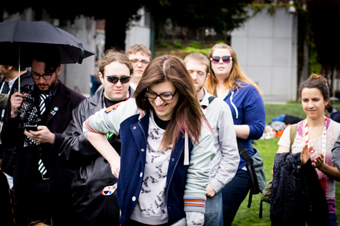 The AV crew, plus photographer Dan Imperiale, were on a mission to find Lost Levels, an unconference in the Yerba Buena gardens – even though a garden amidst all the concrete that is the Moscone Center seemed unbelievable. As we made our way to the park, two gentleman passed by, glancing at our passes. One exclaimed, “Those guys are with Unwinnable.” What a surreal moment that was. It was one of the few moments that made GDC over the top for me.

We got to the park to film Teddy Diefenbach, Cara Ellison and Brendan Keogh. The unconference was as indie as it gets. People got up and spoke for five minutes or so and shared their thoughts on different aspects of gaming. It was Cara’s speech that hit home. Her segment, titled Indie Fucking Rockstar, was in response to a letter she received about a game designer who questioned their decisions. Was their vision too intense for public consumption? Her answer, in short: reach for your dreams. A recurring theme this week.

Every room in the house had game designers and artists showing off their creations to esteemed members of the gaming community. This was the Unwinnable salon Stu had told me about weeks ago, at one of our weekly board game nights. We had rented a mansion, so why not use it? Despite the size of our house, the event was intimate. People wandered from room to room, immersing themselves in different experiences. I had a developer tell me that we were rock stars for putting this on. I told him Stu was the man to thank.

The thing about the salon was that it went beyond just promoting Unwinnable. It lent exposure to the developers and it even cracked a door for Johnny and myself. Johnny came packed with demo CDs for his band, Citizen Blast Kane, and DVDs of The Blink of Death, a short film he worked on with Good Productions. I still had the five keys. 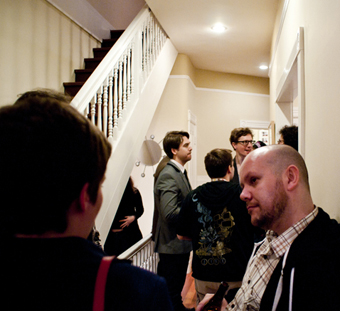 I managed to give them all out that night. I gave one to Unwinnable’s Jenn Frank. I gave one to Disco Pixel founder Trevor Stricker, as he was at the salon showing off a music game. Trevor is a veteran in the game industry who has recently gone independent to create a music game that eventually includes themes of deforestation. You wouldn’t think that a cute-looking rhythm game called Jungle Rumble would speak to something so troubling, but Trevor informed me that eventually your monkey finds out that ‘the man’ is destroying the forest homes of the invading monkey gang. That’s pretty deep for a music game. I gave another key to Karla Zimonja of The Fullbright Company, the team that created Gone Home. Sadly, I’m not sure where the fourth key went (so much for making them all count) but the fifth key went to a person that made an impact on everyone at GDC: Richard Hofmeier, creator of the award-winning game Cart Life.

There’s not much I can say about Richard that already hasn’t been said. He’s a down-to-earth dude and deserves his time in the spotlight. Johnny and I ran into Richard a number of times during the week, but our interaction with him at the salon was all the more special.

Beyond being a show about games, development and technology, GDC is inspiring. It can inject some hope to struggling creators – any kind of creators – and give them a sense of purpose. For me, it answered some questions that will, hopefully, steer me in the right direction.