Those of us who want games to cover more of the human experience sometimes lament how hard it is to make a game about the mushier sides of human life: compassion, say, or sexual attraction. How do you quantify “empathy”? Hell if I know! But here’s something that is integral to the human experience and yet very, very easy to quantify: money.

Money is neutral and transparent; the ways we use it are not.

Nowhere else in our lives do cold hard numbers translate into the daily ups and downs of our experience than when we look in our wallets or check our bank account. And this is the genius of Cart Life, an indie game released in 2011 by Richard Hofmeier. Where other games struggle to use scores to quantify our feelings and concerns, Hofmeier’s has gone straight to the number that actually does make us sleepless at night. And the many ways that the game uses money – by which I mean, all of the ways that that number can go down or up – support the questions that Hofmeier seems to be posing.

For instance, is it good for society to quantify everything that matters in our lives? Can you keep score on a human life? And if you can, why would you ever dock someone points, as long as they were really trying hard to get by?

Cart Life is a game about running a street cart. It’s a retail simulator, like any number of “tycoon” games on the market, where you have to start a business and balance several concerns: stocking supplies, watching costs, dealing with random setbacks and weighing a risky growth plan against the safety of the low-grossing products you’re accustomed to.

But Cart Life is not only a retail sim. It also tells a gut-wrenching story about people who are down on their luck and almost broke, and who start a small street business as a way to get back on their feet. One character – the one I played – is a mother who is going through a divorce and trying to win custody of her daughter; while all that’s going on, she decides to open a coffee stand. Another is a Ukrainian immigrant whose newspaper stand has to succeed if he’s going to keep up with his rent. We hear their stories, and we shape their budgets. 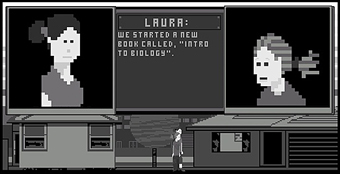 Cart Life deftly plays on its dual nature as a retail sim with an extensively-scripted story. Again and again, the game will pull you into one mindset with its style of play, and then take advantage of your mindset by hitting you with a different kind of experience, right when you’re not ready. Like sticking your hand alternately under hot and cold water, you find yourself getting set up by one element for a sucker punch from another.

For example: Cart Life expects you to remember things. At the start of Melanie’s story, your protagonist is talking to her sister about her plan to open a coffee stand. By way of a tutorial, the sister gives you a list of supplies to buy, the name of a woman who can sell you a cart and a location where you can set up shop.

Cart Life is unhelpful in other ways – and by “unhelpful,” I don’t mean that it obstructs you. I mean that it simply does not help you. You will see reminders flash on-screen for certain appointments you have to keep – like, going to the courthouse for a custody hearing. But these reminders flash by quickly, usually when you’re busy with something else. The beginning of the game is so overwhelming, as you figure out how best to use the time that’s rapidly ticking away from you, that it is incredibly easy to miss them.

This is also how I made probably my gravest mistake, which was to forget to pick up my daughter from school – the same daughter of whom I was trying to get custody. I got home at 11:30 p.m. (the bus is so damn slow) to find my sister in a panic because my daughter was standing around, forgotten, alone, waiting for me, and now where the hell could she be? It turned out that she was okay – my ex-husband went to get her – but you don’t have to be a parent yourself to see what a disastrous failure this was. This is as bad as you can get. 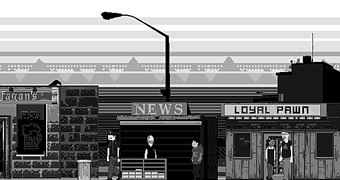 And yet Cart Life let me keep playing the game.

By revealing this plot point I realize that I’m making it sound like the script is what makes this scene devastating. Hofmeier wrote a scene where players can leave their daughter at school and prove themselves to be a totally unfit mother? That’s some heavy storytelling! But it’s the gameplay that made this moment possible. I didn’t fail because of the script – I failed because I couldn’t handle the series of challenges the game threw my way. I had a chance to do right by my daughter, and I blew it.

We understand what we love from the story and the script; we understand how to support that love from the gameplay and the daily tally of profit and loss. But like everything in this game, these two sides are tangled together. Money is neutral and transparent; the ways we use it are not. Cart Life gives us the messy ambiguity of human relationships and the simple, clean transaction of cash for service, and it is hard to argue that either perspective outweighs the other.

While Cart Life has been tagged a “political game,” it doesn’t deliver a simple critique. After all, you’re not just a struggling member of the underclass; you’re also a budding capitalist. The crushing anxiety of the first half of the game turns into relief, satisfaction and even pride once you finally get your stand going and start to bring in some money.

Persistence will win out. Even after doing a laughable job of living Melanie’s life for a week, and after making as many mistakes as there were to make, I still got a … I can’t call it a happy ending, but it was life-affirming. (No spoilers here: go play the game and see it yourself.) The most direct statement by the author came on the final score readout, where Hofmeier encouraged me: “Congratulations on doing so well with this character!”

He’s not rewarding me for making the right decisions, or making the most money, or any of the other obvious goals. He’s congratulating me because I never gave up.