You can’t talk with a kid about politics, or Downton Abbey, or what a terrible day you had at work. Little kids rarely travel broadly, catch the latest theater or read Proust. They don’t even read listicles on Cracked. In extended conversation, there’s not much you can talk about with a kid, which is why you don’t take them to nice restaurants. The best way to hold a conversation with one is just to make stuff up.

My kid and I like to tell stories to each other. For example, when we go hiking, we make things up about weird creatures out in the woods, or we study the trail markers – you know, the featureless stripes of paint that mark trees along the path – and we try to imagine what they’re really saying. Hikes through the woods are good times to let our minds wander, and of course, because we’re both gamers, we often talk about games.

“Then there’s an award for the best cinccino ranch in the world,” he told me. “If we win that, we’re going to throw a big party in Washington, D.C.”

The other day, my kid told me that he has a cinccino farm. He’s raising about 20 of the little cinccino, and 10 of them were going to come along on our hike as a scout troop. They were even carting parachutes so that when they got to the top of the mountain, they could safely jump straight off.

A cinccino is a species of Pokémon. It’s a small grey rodent with thick, beautiful fur, kind of like a chinchilla – if a chinchilla were built to claw the hell out of any little monster that gets in its path. It evolves from the minccino, and my kid tells me that he has a few minccino on his ranch as well.

But the cinccino are the main attraction, and all of them have names. There’s Katie, who likes to knit gloves that she makes from her own fur. And Flick, who is a world-class videogame player. And Timmy, the youngest one, who’s only a year and a half old. We had a conversation about that the other day while we were taking a walk. He explained that they were all related to each other – brothers, sisters, uncles and aunts.

“So wait, how do they breed? Do you breed them out to other farms?”

“Well,” he explained, “you know how you told me that brothers and sisters couldn’t have babies, because they have problems? That’s not how it works with cinccino. They – ”

“I’m going to stop you right there,” I said, “and suggest you think of another breeding plan. ‘Cause trust me, that one sounds kind of icky.”

And he did change it, of course, because why not? He’s making the whole thing up. The cinccino ranch story is just the latest one to spin out of his little brain, and while he knows it’s not real, he chooses to believe in it – unwaveringly. 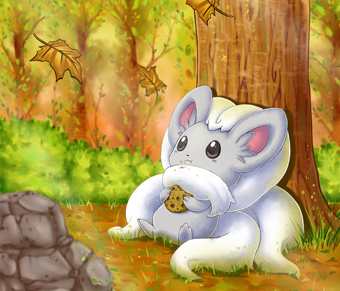 The other night, while I was talking on the phone, I mentioned that the kid had “made up” a Pokémon ranch. From the other room, he objected: “It is not made up!” Hurt, he reminded me that he just won an award for running the best cinccino ranch in New England. “Then there’s an award for the best cinccino ranch in the world,” he told me. “If we win that, we’re going to throw a big party in Washington, D.C.”

“Do you think the President will be there?” I asked him.

No question fazes him. A week ago he had to stay home sick from school. As he crashed out on the couch, too sick and defeated even to reach for the remote control, I asked him if the ranch could carry on without him. Not a problem, he said. “I have an automatic food dropper button in my room. So that’s one lucky thing, that we have that.”

Most parents are worried that games will colonize their kids’ imaginations – that their kids would imagine a whole new Star Wars, all on their own, if only the old one weren’t stuck in there already. But games have been shown to fuel children’s creativity. Let’s cite a scientific study from Michigan State University: “A study of nearly 500 12-year-olds found that the more kids played video games, the more creative they were in tasks such as drawing pictures and writing stories. In contrast, use of cell phones, the Internet and computers (other than for video games) was unrelated to creativity, the study found.”

It stands to reason that if games stimulate our make-believe, they could aid our creativity. But it still amazes me to watch a kid move fluidly in and out of these worlds, play with them in their everyday life and add or drop rules however and whenever it suits them.

Of course, it helps if you’re crazy obsessed with Pokémon, as my son has lately become. But there is hope on that front. The other night we finally gave Quantum Conundrum a try. As we worked through the first few levels together and got to know the game’s mascot – the fuzzy little extradimensional alien known as “Ike” – my kid turned to me and said, “You know, I’m an Ike too. I was born in the fluffy dimension.”

“Oh believe me, I remember,” I said. “You were quite a handful.”

Do Your Part, Get Danny DeVito to Voice Pikachu
Previous Post