The countdown ends. The match begins. The rest of my team rushes around the other side of the abandoned bar, eager to get first blood. I duck to the left and dash past a burnt-out car wreck and down a back alley. There’s no need to check corners. This early into the game, there’s no way I’m getting outflanked.

I round the corner and smile. There’s my boss, aiming in the direction of my approaching team. He’s wide open. I level my replica M16 and fire two shots into his back. He’s out. I move past him into a rear flanking position. I sneak around the garage, ready to sweep the opposing team from behind. It’s perfect. I’m so high on adrenaline, so excited, that I can barely aim at my next target. 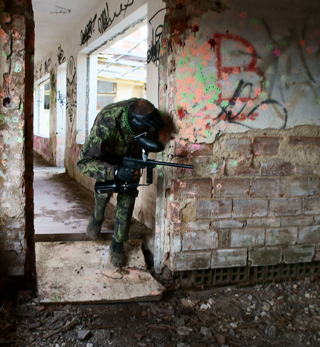 My teammate spots me. He doesn’t know my plan. He doesn’t bother to check his target. He fires. I try to slide away into cover, but as I turn, I take a shot in the sternum. It stings a lot more than I thought it would.

It stings because I’m not playing Call of Duty. I’m at the indoor Call of Paintball range in Richmond, British Columbia, attending a birthday party with my coworkers. I’m here not only to celebrate but to feel what it’s like to be shot at, to get as close to a real combat situation as I affordably and safely can. It’s thrilling, satisfying, and terrifying all at once. And after playing paintball, first-person shooters just don’t do it for me anymore.

Mostly, it’s due to a lack of consequence. Aside from a desire to see my experience points climb higher, there’s no incentive for me to win, no reason to play safe when I’m playing online. If I lose in Call of Duty, it’s not the end of the world. I can get into a new match within minutes, with a whole new crowd of people. If I get shot and die, I’m up again in seconds, and the only thing I’ve lost is momentum. With nothing to lose, I generally move around in the open, dive to the ground like an action hero, and act recklessly. There’s no danger here, because digital bullets don’t hurt.

Paintballs do, unfortunately. At long range, you definitely know when you’ve been hit. Most likely, you’ll have a welt for a few days. But from 20 feet, a paintball can break the skin. It makes you think twice about rushing blindly around corners and getting lit up.

The fear of physical pain and the shame of having to walk back to your spawn point with your gun in the air don’t even come close to accurately simulating what it’s like to be in a real-life combat situation, but at least there’s some consequence. When am I hunkered down in a hospital to hold my team’s position (and win the game), one of teammates gets blasted from around a corner, making me jump. I know I have to go in – alone if need be – to flush out the attacker, since blind firing around corners is an illegal and dangerous move.

Do I run in? Do I risk getting shot that close? Do I rally up some help and hope they take the first hit? It’s a lot to think about in the span of two seconds, especially in a game where you can’t afford to hesitate. 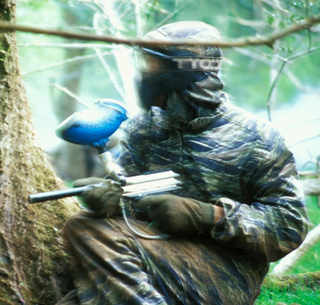 It’s not just the risk of getting hurt that causes hesitation. When I poke out the window and see someone from the other team, five feet away and facing the wrong direction, I freeze. I know that he can’t hear me when I shout “Mercy!” at him. Twice. I know I need to shoot him, because I can’t reach him to tag him out, and he might turn and shoot me any second. In the end, I give him an epidural. I can tell it hurts without looking at him, because earlier on, I had a similar thing happen to me. I don’t want to hurt anybody, but I need to protect my teammates and stay true to the spirit of the game. I have to make a choice. I have to decide who gets stung.

Call of Duty and other games of its ilk just can’t match these scenarios. When one of my friends falls in front of me when playing online, I’m more concerned with collecting his dog tags to improve my own score than avenging his “loss.” I’m not worried about his well-being. When one of my team members comes back to the meeting room after a paintball match with her hands bleeding, I’m concerned. It’s still a game, but the stakes are higher. It’s hard to go back to a situation where there are no stakes at all. For better or worse, having something to lose just makes for a more thrilling experience.

A few days later, I jump into Black Ops 2 and take the multiplayer for a spin (as I haven’t played Modern Warfare 3 in months and I want to remember what it’s like). The guns sound great. I can call in airstrikes and watch people get blown to hell and back. I’m racking up kills with high-powered weapons and I’m bored out of my mind. Nothing I’m doing compares to running across a fake street and sliding into cover on the other side as paintballs burst against the wall behind me. Or the rush of landing that perfect shot on someone’s mask from high ground with my M16 from halfway across the arena. Or the panic of being pinned down behind an oil drum, balls plinking off metal as I motion for my teammates to fall back and leave me behind.

Once you’ve tasted that kind of experience, piloting a floating gun and deleting 13-year olds from the field just doesn’t have the same pull anymore. It’s a great argument for getting outside more. Video games can take us to fantastic, impossible worlds that could never exist in our reality. They can delight us with gripping plots and thoughtful characters. But when it comes to recreating real-world activities and settings, there’s just no way they can ever match the real thing.