When I was 16, the first guy I ever dated died of a shotgun wound. Among other things, he was a gamer.

I’m not a gamer. I’m an educator; I grade papers on Renaissance and science fiction literature at U.C. Berkeley and review essays on a wide variety of topics at Smarthinking, an online tutoring company. In the past couple of years, my current partner has become a professional videogame critic and I have reviewed over 60 essays on videogames. I haven’t played that many videogames in my life.

I have trouble with being represented as a gun onscreen

Even if I had played 60 videogames, I wouldn’t feel comfortable identifying as a gamer. I remain gamer-adjacent. My students’ essays have helped me understand why.

I’ve worked with a couple of students who are studying videogames; one says he is pursuing a career in the industry because gaming has turned him into a “master problem solver.” Another submitted a code of ethics for a gaming company. However, most of my students are gamer-adjacent, like me.

My distaste for violence is echoed in these gamer-adjacent essays. (I also have to note that the tutoring handbook chapter I most frequently consult – the one on APA citations – has samples from an essay titled “Effects of Violent Video Games.”) Some papers don’t mention specific titles and categorize all videogames, or all “mature” videogames, as excessively violent. Other papers focus on Call of Duty or the Grand Theft Auto games.

Many students compare sports and videogames, but I don’t find the arguments that favor sports convincing. I’ve adhered to a strict no-jock rule in my dating because I believe physically knocking people over in football is more violent than pretending to shoot aliens with a joystick. 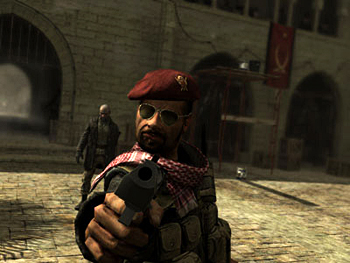 However, a button is no longer such an innocent thing. Bombs can level cities and nukes can destroy our world, all with a controller not too dissimilar from a videogame console.

On the other hand, some students believe in more immediate impact, that people will mimic the violence they see in videogames. After all, Eric Harris and Dylan Klebold’s violent attack on Columbine High School was inspired by what one of my students referred to as an “in-game battle” from Doom.

I knew a few students at Columbine. As part of the band and choir at a high school in Ft. Collins, Colorado, I traveled to Columbine for music contests and performances. The attack happened after I had moved to Ohio, around the time that the boy who took me to see City of Angels and to the Olive Garden died of a shotgun wound.

Mimicry has come up in many pedagogy essays, but I believe that media – including videogames – can teach people critical analysis, to think before they emulate. In fact, I’ve used a game called Conversacolor, developed by my pedagogy professor, to help my students learn analytical skills.

My gamer-adjacent students could love games – even become gamers – if videogames taught them how to think critically about violence.

And there are some students who argue that violent videogames can also be educational. One student wrote an essay on how God of War taught her about Greek mythology and challenged her with puzzles. Many papers (and my current partner) praise games for teaching them problem-solving skills and increasing their visual perception. But among the gamer-adjacent, there is usually a divide between violent and “educational” games, if a distinction is even made. 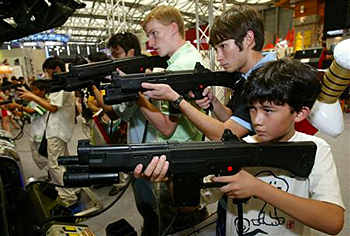 My students argue that excessive, realistic death and torture will desensitize gamers. While the link between desensitization and mimicry is tenuous at best, I do believe that media affects people. Well-crafted books, films and television shows change how people think and feel. The thoughts and feelings elicited by media alter how people treat one another.

For instance, one student compared the sexism in Super Mario Brothers and Grand Theft Auto. I’ve played a good deal of Super Mario Brothers, and can see elements of chivalry – saving the helpless princess by defeating enemies. Courtly love requires men prove their love by fighting, making violence an important part of wooing, and implies that women cannot save themselves.

My student contrasted this with more direct acts of violence against women in the controversial Grand Theft Auto series, such as attacking “random female victims” on the street. While the sexism here is blatant, it draws from the ethos of chivalry that permeates most media today: women are helpless. Women are objects – to be won or to be assaulted.

I remain gamer-adjacent because I see only a few gamers make this connection. Men are taught that women need to be saved – that they want to be saved – and romance should include violence. Even seemingly innocuous games reinforce this gender stereotype.

Violent videogames don’t make me want to mimic violence or win love with violence; they trigger my anxiety. Gunshot noises in games can remind me of the people I’ve lost to bullets. I have trouble with being represented as a gun onscreen, as you are in most first-person shooters – I can’t be a thing that killed people I cared about. Resurfaced memories of gun-related traumas cause me to treat my friends and my gamer-lover differently. I have trouble connecting through resurfaced pain.

A few of my students have PTSD from military service or other violent experiences and remain gamer-adjacent because of this. Others are single mothers who fear their gamer children will become violent (or treat other people poorly because they are desensitized to violence). A number of my students are minorities and most are economically underprivileged.

I have heard that the videogame community needs more diversity. And while it may be best that I (a bibliophile who writes poetry with pen and paper) remain gamer-adjacent, I would like to advocate for my students. So I want to ask the gaming community: how can these college students learn about games that are educational and beautiful? How can they learn that “videogame” is not synonymous with violence?