We thought things would be better when the last generation that had lived without videogames finally gave up the ghost. We were wrong.

The beginning of the end was in 2113, during the reign of George Bush the XIV (the fourteenth such Bush  to be dubbed “The Terrible” according to Wikipedia). Bush was an avid gamer and such a fan of Call of Duty that, by executive order, he forbade American servicemen from “camping” during armed conflict. It was a week before the latest in the series, Call of Duty: 21st Century Warfare IV, that the president was made aware of a controversial review. The critique called the game “excellent,” and “mandatory for anyone under the age of 21.” By all accounts it was a rave. But the score, a mere 9.999999, was considered a slight by many. Half the country, already home for work in observance of the one-week Call of Duty government holiday, set to the streets in anger. The author of the review, an unpaid intern on parole from debtor’s prison, was lynched, burnt at the stake and drawn and quartered for his offense.  The ensuing riots caused billions in property damage. The outcry was universal. Something had to be done about games journalism. 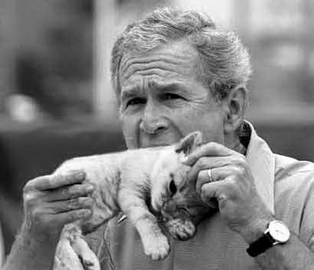 Maybe we should have seen the writing on the wall sooner. It was as early as 2020 that most word processors, browsers and mobile phones auto-corrected games journalism to games “journalism.” By 2024, games “journalism” lol was immortalized in the Oxford English Dictionary. But it wasn’t until 2113 when the 42nd Amendment to the Constitution declared that games “journalists” were not protected by the First Amendment.

Bush named his cousin (and CoD clanmate), Zeb, America’s first Games “Journalism” Czar and tasked him with regulating anyone who wrote about games. This proved a sticky problem since most games writing was done offshore, by prisoners working off college loans in AOL debtor prisons. Some questioned the wisdom of leaving such important matters as videogame reviews (now, obviously a matter of national security) to wage slaves. Those questioners were summarily shipped off to Antarctica to work the soy fields for the rest of their days.

The POTUS and the people wanted one thing more than anything. They wanted a videogame “journalism” unmarred by subjectivity and influence. They firmly believed that if videogames had been invented in the ’70s that Woodward and Bernstein would have written about them – and they wouldn’t have given CoD: 21CWFIV a freaking 9.99999.

But no amount of oversight could improve games “journalism” in the eyes of the public. During the 18 months of government intervention, writers produced the first Pulitzer Prize for writing about games. An American expatriate A.I. was named poet laureate of the island nation of San Francisco for a sestina about Angry Birds. And the New York Times published an excellent 15-part expose about virtual sex workers in Activision Blizzard Hustler’s hit MMO World of Sexcraft.

Nobody read any of it. Six months after the government intervention, Call of Duty: Shooting Brown People III – an HD re-release of the 21st-century classic – was released. The game got even lower review scores. IGN gave the game a 9.99998, citing the fact that pretty much everybody in the world was brown now and maybe we should come up with somebody else to shoot. The country teetered on the brink of anarchy.

That’s when a captain of American industry stepped up with a solution. The man was Cullen Wrightsman Jr., the quadrillionaire, heir to a vast fortune built on biotech. His father, founder and CEO of CockTek, built a fortune on human cloning. Others had found ways to grow organs, spinal material and even brain tissue, but Cullen Sr. had perfected the growth and transplanting of penises and reaped the vast rewards of such a world-changing innovation. His son was slightly less inventive. Much of his tenure as CEO of CockTek was spent playing videogames. He, too, thought that games “journalism” sucked, but he thought he knew the answer to the world’s games “journalism” problem.

“People don’t want to read about videogames,” Cullen Jr. once said.  “And they certainly don’t want to know what other people think about them.” What people really want is a clone of themselves to play the game and tell them if they should buy it or not. And Cullen had a vast army of penis-less clones that would help him prove it. Cullen Jr. spent much of his father’s fortune building a game review complex where the clones could be sequestered to play videogames and report their assessments back to their well-hung originals.

The plan worked. The clones knew exactly the kinds of games their originals would like. They knew every pet peeve and every foible. The score that they assigned to games was the exact score that the original would have made up if they were reviewing the game. Games “journalism” was revolutionized to the point of obsolescence. Nobody needed to write about videogames any more. A weekly report, sent to every DickFlix subscriber, gave them a concisely ranked buy list prioritizing every game out that week from best to worst. The results were different for every man and they were always spot on. At first.

Eventually the clones developed odd tastes that diverged from their originals. They got bored of formulaic shooters. They started thinking about the meaning of games. They started handing out 9.999999s. Cullen Jr.’s first solution to “critic creep” was to kill the clones after their first review. But the cost of growing new clones for every game was prohibitive. And then there was the clone rebellion. On November 5, 2115 a group of veteran clones – those who hadn’t yet been decommissioned and replaced – led a rebellion. Three million penis-less clones rose up, broke out of their testing chambers and destroyed the CockTek cloning facility. Clone leaders took control of CockTek bioweapon plants and gave the world an ultimatum – abandon your insane addiction to review scores or face annihilation.

George Bush XIV did not negotiate with terrorists. And the clones were bluffing. They didn’t have the balls. Tense negotiations ensued and eventually the clones agreed to allow humanity to step back from the brink of destruction. In exchange they were granted access to 50 colony class spacecraft. The three million clones left Earth, never to be heard from again. Some say they settled a new world, where the discussion of videogames was elevated to an art. Like shackles thrown down, the phrase game “journalism” was freed of its scare quotes. Rumors have it that in the decades since the colony’s founding, not a single review score has been assigned.

Nobody knows what system the clones settled in or the name of the planet they call their new home. But the few of us who remained here on Earth, writing about games from the underground, call it Paradise.

Pretension +1 is a weekly column about the culture, art and craft of videogames. Consider it the first draft of the Paradise manifesto.