Editor’s note: due to damage caused by Hurricane Sandy, the greater New Jersey area is celebrating Halloween this year on November 5, hence the post-Oct. 31 publication of this holiday-themed piece.

When I think of Fall and Halloween, I think of horror films. I can’t help it. There’s nothing better than a good scare, and why not devote an entire month to celebrate that? And when horror films come up in conversation between genre fanatics, one thing that’s always hotly contested is whether or not we should see the monster that’s on the protagonist’s tail. There are plenty of slasher examples – Leatherface, Jason, and Michael Myers, to name a few – but are we afraid of the boogeyman, or we afraid of what they might look like under the mask? 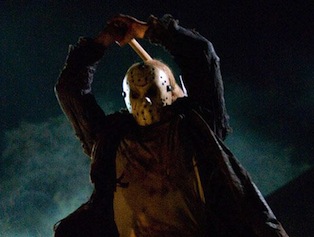 I remember being terribly disappointed the first time Jason was unmasked in the Friday the 13th series (not including him popping out of the water as a kid in the original). As a viewer, you work up in your head all of the awful and fucked-up things that might be hidden under that mask; it’s part of the reason why horror movies have thrilled me and continue to do so. I can’t stand when the monster is hidden from view and revealed at the end – Signs and Trick ‘R Treat are perfect examples of this. M. Night Shyamalan created a tense, foreboding and (as far as I’m concerned) horrifying alien invasion; that is, until I saw the alien at the conclusion of the film and laughed my ass off as it was rocking back and forth. On second viewing the movie had zero impact as I couldn’t help picturing that weaving, lanky thing wheezing on the other side of the door.

On Oct. 31 I finally got around to watching Michael Dougherty’s 2007 film Trick ‘R Treat In a very Creepshow-style setup, Trick ‘R Treat tells four vignettes that take place in a little town on Halloween night. Throughout each tale, references are made to a little guy in a burlap sack mask named Sam; it seems his character ties everything together. Up until the last story, I was smitten until (SPOILER ALERT) at the end of the film, they take a really cool creepy little kid, take his burlap mask off and reveal that he is – wait for it – a living Jack-O-Lantern boy. 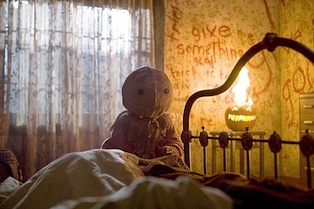 Michael Myers is the ultimate example of the effectiveness of keeping a killer’s true appearance a secret. The white mask and dark attendant suit paint the perfect visual John Doe; our imaginations run rampant with what goes on under that mask over the years of abuse and murderous rampages. We get one very tiny glimpse of what he looks like at the peak of his struggle with Laurie in the original, but unless you went out of your way to slow-mo your VHS copy or pause your DVD, you could blink and miss it. Even in Rob Zombie’s reboot (which I was not a huge fan of) we no longer see what Michael’s face looks like the instant he makes his transition from boy to man. He is evil on two legs and scary as hell. And in the end that’s all that really matters.

I could go on and on with examples of how quickly something awesome can be ruined with awful effects, be it classic or CG. Cloverfield was great until you see the giant CG vagina lobster; Humongous was cool until that goofy-looking…thing is revealed. The path of  destruction wrought by a ruthless embodiment of evil; every filmmaker not looking to re-invent the wheel (or looking to make a modern classic) should take cues from Hitchcock and Carpenter. After all, there’s nothing scarier than the unknown.

Get in a horror debate with Erik Weinbrecht on Twitter @Erock88.