My father’s heart stopped not too long ago. His body, wracked by an infection he was unaware of, just gave out. His eyes closed and he fell over. If a neighbor were not visiting it is very likely my father would have died. Thankfully she and my stepmother, both tiny Puerto Rican women, were able to drag my father’s 6’5″, 250-pound body into a vehicle and rush him from their remote rainforest compound at the base of El Yunque to the nearby Veteran’s hospital.

I have seen my own death many, many times.

Later, I spoke to my father on the phone. “You know how people say you see a bright light? All I saw were flames,” he said with a wicked chuckle. But the truth is that when the blood and electricity stopped flowing to his brain he saw nothing. His eyes closed and everything went black. When he opened his eyes again, he was in intensive care, kept alive by machines and pumped full of antibiotics.

For nearly half of my life, I believed the fairy tale – that somehow the you-ness in you could escape your flesh after death. If you were baptized and confirmed (done and done) that spirit would be delivered to the loving arms of Jesus Christ where you’d stay, along with everybody else you cared about (so long as their passport had the proper stamps) until the end of time.

I remember, once, sitting in Sunday school only half paying attention to the real talk we were getting from our youth minister. We were in the church’s gymnasium seated in folding chairs between the two basketball hoops. Midfield, opposite the scoreboard, there was a massive wooden cross hanging on the wall. I imagined the thing coming unhooked from the plaster, jerking heavily, then coming loose from its moorings. Screaming children scattered from its growing shadow, but one very young tyke wasn’t aware of his impending doom. In the slow-motion panic of it all I stand up and leap to the child’s rescue, pushing him out of the way just in time. I am crushed by the cross. Everyone is sad, but it’s all okay because I did a good thing and I will get to be with Jesus. 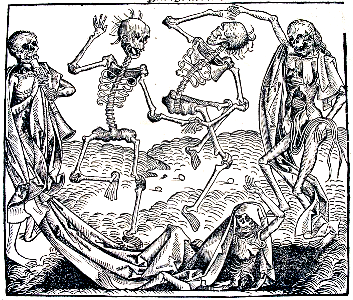 I have seen my own death many, many times since. One humid Orlando night I vividly envisioned my own death by drive-by shooting as I carried my dry clothes from the laundromat. When the headlights of the strange car washed over me I let my basket fall to the asphalt, spread my arms and welcomed the bullets as they tore through my back and exploded from my chest. While driving, I have careened into oncoming traffic and launched through countless guard rails. I have died in hospital beds from cancer, tuberculosis and AIDS. And for a good part of the ’80s (if you’re the right age, you may remember this too) I was ceaselessly vaporized by nuclear war.

Just recently, while sitting next to my pregnant wife on an airplane, I played out the scenario of a total systems failure. As the 737 dropped from the sky, the fuselage shuddering violently as we fell to earth, I’d take my wife’s face in my hands, look into her eyes and lie. “Everything will be all right,” I’d say to her. From the panic in Alexis’ eyes, I would know that she didn’t believe me, but I would hold her firm and keep her gaze in mine until the end so that the last moment of our existences would be spent in the presence of love.

I will be 40 years old very soon. It was almost exactly 20 years ago that the truth about the afterlife really became clear to me. I was in the shower when it hit me. After all of this there is nothing, I finally realized. My knees gave out and I steadied myself against the wall with one hand. The water went cold chilling my naked body as the truth of it sunk in. From that day forward I have frequently been terrified of the day that I learn what it really feels like to turn off.