Something extra-terrifying (and wonderful) is returning from the grave. It’s John Carpenter’s seminal 1978 slasher flick, Halloween, this year commemorating nearly 35 years of diehard cult following with a limited theatrical re-release.

Revivals like this are the most fun – they force self-reflection upon us. Halloween is one of my favorite films ever and I am amped to see it on the big screen for the first time, but it’s also got me thinking: why all the hype?

Carpenter’s genius was no accident – something about Myers struck a live wire in society.

For one, it’s grade-A accidental genius. No one in the original cast and crew predicted that in 21 chaotic days of under-funded filming they would produce the most successful independent horror film to date. This indie darling premiered as a crapshoot in Kansas City; it now boasts success comparable to The Blair Witch Project and Teenage Mutant Ninja Turtles, all because some ragtag prop team threw a painted William Shatner mask on Carpenter’s childhood friend, gave him a butcher knife, and subsequently struck pop gold. 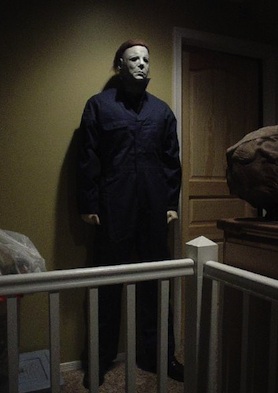 I’m just going to say what everyone’s thinking: Myers isn’t even that scary. This mute, bumbling suburban terror staggers around sleepy Anytown, USA as discreetly as King Kong in a chandelier shop. He knocks over potted plants, drives stolen cars, moves at turtle speed. (Someone really needs to tell him to get that Darth Vader-esque asthma under control, too.) His mask could be much scarier; so could his weapon of choice. Not to mention his body count is pretty unimpressive for a mass murderer.

So who the heck decided Myers would single-handedly scare the pants off of America?

I don’t care if you hate horror or love it, these films teach us a heck of a lot about ourselves. As Wes Craven put it, “Whether it’s Frankenstein, what science is starting to do, fooling around with human beings [or] being able to control people’s minds… It’s all reflecting the culture.”

In other words, Carpenter’s genius was no accident – something about Myers struck a live wire in society. Halloween was released amidst the craze of Cold War propaganda and residual Vietnam guilt; a punk generation of nonconforming kids poured forth from shopping malls and housing developments, coming from heartland towns just like Carpenter’s fictional Haddonfield, Illinois.

More importantly, Myers was a manifestation of what we’d been afraid to admit to ourselves: we were terrified of our neighbors. With the nuclear American family under fire, Carpenter gave us a quiet, angel-faced 6-year-old from suburban utopia who puts on a shiny clown suit one night and snaps.

Myers is a killer born from within a white picket fence. He’s a stalker of babysitters, sexually-active teens and neighborhood dogs. Inept as his killing tactics may be, he got away with murder because he is not disfigured, not an outcast or a terrorizer. He’s normal. He is an evil that looks enough like us to be overlooked, one to be trusted. He is one of us. What’s more terrifying than that?

Now Halloween is upon us, and Michael’s finally coming home. Feel free to trick or treat to your heart’s content, but don’t for one second think you’ll recognize the Boogeyman – even if you see him.