Late some evenings I take walks through the deserted streets of my hilly residential neighborhood in the soggy Pacific Northwest. These post-midnight sojourns are a good time for reflection; most of the time I return home feeling refreshed and, despite the hour, inspired to work on one thing or another. Yet just as living alone can feel entirely normal ninety-nine percent of the time, that rare occurrence when something doesn’t feel quite right is perhaps always lurking underneath, waiting to appear in the throes of some random and inopportune moment.

That unease roils in the belly, hardening until your chest feels as though it’s going to burst.

Sometimes I have nights when I flop down on my mattress at some ungodly hour and, maybe because my front door opens to the outside world, my mind suddenly jumps to the first twenty or so minutes of The Strangers, the initial encounter of which left me deeply unsettled in a way that the rest of the film couldn’t possibly hope to measure up. I could also perhaps be distracted in the living room and hear something crash elsewhere in the apartment for no easily discernible reason. Between the passing blanketed light of streetlamps, black shadows can become monsters, silent residents vessels of stalking fear, not unlike Twin Peaks’ Killer BOB.

It’s places like this that fear resides, and even just in the form of psychologically-motivated tension it’s still a testament to the convincing power of atmosphere. I often wish there were more truly frightening videogames (or movies, for that matter); the interactive horror experiences that have actually forced me to physically stop playing number among the very few, and all of them deal 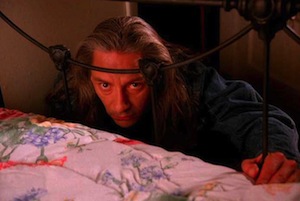 in one form or another with a kind of powerlessness foisted somewhat unwillingly on the player.

Fatal Frame is a literal haunted house, for instance, with your spectral enemies breaking down the psychological bargaining players often bank on, allowing that a corporeal monster is theoretically bound to an enclosed room’s walls and ceilings. Doom 3 is a monster closet that’s predicated on cheaper pop-out scares, with the alarming caveat (in the original, anyway) that you can’t shine a light into the darkness and keep a gun aimed at whatever might be lurking there at the same time; Dead Space 2 plays the immediacy and distance of its aural design against you, further augmenting its scripted scares. The key to all of these is the unknown.

Let’s forget for a moment that at any given time in a horror game you might not know if you’ll have enough ammo to survive the next ambush (and whether you’ll be able to fire it off in more measured shots than a panicked spray if you do). Dead Space 2 often feels like it’s slowly choking the life of out you; that unease roils in the belly, hardening until your chest feels as though it’s going to burst. In effect its design isn’t much different from Doom 3’s, though Dead Space enjoys the contemporary technical sophistication and nuance that bring movie-quality production effects and scripting to its gameplay. It’s always a given that some abomination is going to leap out at you, flailing its distended bone-claws with an inhuman shriek; but like the best fiction, the importance 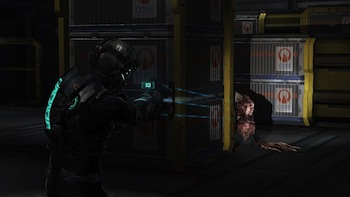 isn’t in wondering if something is going to happen, but from not knowing from exactly when and where its coiled execution will spring.

Going back to Dead Space 2 for the first time since last year with the lights off (and now, the surround sound blasting), I found the game is often still an unnerving exercise to endure. Upon starting a new game I was a little surprised, even half remembering some of the earlier ambush points in the first few chapters, by how easily an abrupt surprise attack could go awry, though my refusal to buy additional ammo couldn’t have helped. More than once I’d quickly turn around, gun aimed into the dark, only to see a quick fiend form flash nearby across my field of view, eliciting some combination of an ab-tightening jump, shouting or spending half my plasma energy on dead air.

I was on a mission: reach the first encounter with the stalker necromorphs, bird-like terrors that hunt in packs, psyche you out by darting between cover, peeking around corners to draw your fire and jumping on top of barriers. They’re happy to toy with you until they decide to flank you, charging when (and where) you’re least expecting it while loosing an unnatural shrill that’s among the most disquietingly stressful noises I’ve ever had the displeasure of hearing.

Stalkers are without a doubt my least favorite enemies in Dead Space 2. I recall on my first playthrough being so utterly petrified of them that whenever I would draw near enough to hear 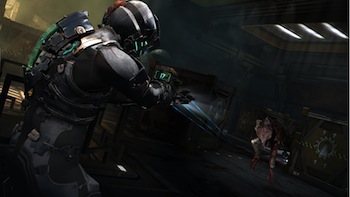 their guttural barks and trilling, raptor-esque yips it would be all I could do to steel myself enough to even enter their arena. It doesn’t help that you only find them in maze-like environs, making it harder to get a gauge on where they’re hiding. Give me all the light in the world and I would still hate these things.

When I finally reached the church where you’re first forced to confront the stalkers, the fear was practically spilling out of me. It was strange that this time around they seemed especially prone to being provoked – they weren’t working as much in packs or scampering between cover positions, though their demonic screech remains enough to make you feel your soul attempting to wrench free from your body. Regardless, I can vividly recall much of the whirling panic of later meetings, traumatic as they were. I adore Dead Space 2 and also shudder to revisit it, even in my mind; at least there I can keep horrors like the stalkers in an anxious prison, where fear may only yet cast a thin shadow.

Steve Haske tries not to ponder what frightens him too much on Twitter @afraidtomerge.