Recently I picked up the Xbox 360 version of Minecraft to see what all the fuss was about. I’d seen YouTube videos of impressive in-game projects players had made, among them a 1:1 scale model of the Star Trek: The Next Generation’s U.S.S. Enterprise, a massive computational computer and giant cannons meant to shoot cows out of the sky. I made the reasonable assumption that Minecraft was a game about building, and being a fan of Lego and Mega Bloks, it sounded like an experience I ought to enjoy.

If you leave the game in Creative mode that’s essentially what you get, but I chose to play in Survival mode. No one had told me about the horror of realizing you’re falling into a lava pit after mining the stone block you were just standing on, or of watching debris rain down on top of you after unknowingly mining directly underneath a gravel pit, or even digging into the ocean accidentally, forcing you to watch your careful excavation fill with seawater before you drown. These are just a handful of the environmental dangers in the game; then there are the monsters.

Perhaps more than building blocks, Minecraft is a game of fear.

Nightfall in Minecraft is when the monsters come out: zombies bludgeon you to death, skeleton archers impale you with arrows and giant spiders climb over the fences built to keep zombies and skeletons out. The only way to keep the creatures of the night at bay is literally to cast as much light as you can. Monsters can’t spawn in well-lit areas, so your first order of business in survival is either digging a shelter into the side of a mountain or building a house. Next you need to make charcoal in an oven or dig up coal to make torches, then spread them around to make spaces safe at night. Those first few harried, terrifying hours – trying to secure an area as much as possible before you can continue exploring – are exhilarating. 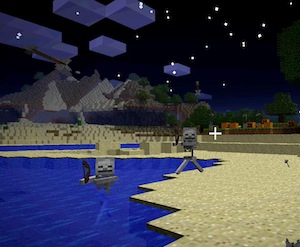 When you start a game, you spawn with a map that fills in as you walk over the surface of the world. I love charting fresh territory, marking the borders of my Minecraft dominions by spreading cobblestone towers festooned with torches across the landscape. Early in a game these serve as trails to lead back to houses you’ve built, should you get caught outside at night and in need of shelter; spreading this network of beacons often leaves me at the edges of my empire as the sun inevitably sets, and I realize I’ll never make it back to safety before night falls, forcing a frantic emergency shelter dig into the side of a nearby hill.

As the sun rises the zombies and skeletons burst into flames, but the giant spiders remain, as do the silent four-legged monstrosities called Creepers who explode if they get too close to you. I can’t tell you how many times I’ve been laying railways or otherwise building when I’ve turned around just long enough to see a Creeper’s gaping black mouth and mottled green skin on top of me. They generally leave me with just enough time to yell out before exploding, usually destroying whatever work I had just accomplished and causing my death in the process.

Perhaps more than building blocks, Minecraft is a game of fear. A recent patch to the 360 version introduced the Enderman, a new monster type. I could only say one thing when I first saw one of these tall black spindly creatures with thin-slitted glowing pink eyes. 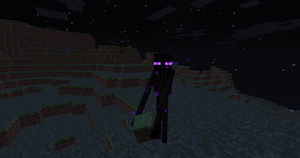 I hate the way Endermen look. I hate the way they sound too – uttering noises like pigeons, only rougher, as though the birds were pack-a-day smokers. When you’re underground you can’t tell precisely where their sounds are coming from, either. An Enderman could be right on the other side of the wall you’re digging through as easily as it could be near a waterfall cascading down into your mine. When you kill an Enderman the scream is borne straight from Hell.

Endermen may also interact with the world randomly. I’ll find random blocks of dirt or holes in the ground and wonder if an Enderman did it. If I see them walking around though, I don’t dare watch because they only attack if they catch you looking at them. It’s like knowing a rabid animal that is right behind you but you can’t turn around to see what the hell they’re doing, only you’re being assaulted by inhuman noise the whole time.

I’ve played Resident Evil, Silent Hill and Alan Wake, but for me no game designed with fear in mind has come close to Minecraft’s recurring terror. It invites a smorgasbord of phobias: fear of the dark, falling, confined spaces. Underpinning the entire experience is the fear of the unknown, the challenge that all explorers face when striking out with naught but their limited supplies, wits and whatever cobbled-together experience previously learned. 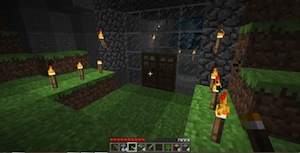 The fear of death in Minecraft is exacerbated by the rarity of material goods. Taking gold ore or diamonds back home after sundown or through a mine crisscrossed with lava is always nerve-wracking; when you die all the items in your inventory are scattered around the area of your death. Sure, you can return to the site of your death, but what happens when you die after dark in the middle of nowhere? Or deep underground, lost in a cave?

Dying in Minecraft can be an awful experience if you lose rare items in the process. Of course you can just frequently save and simply reload after meeting an especially tragic end, but I don’t. Removing the game’s fundamental fears would take too much away from the experience. It’s worth nearly peeing yourself when you turn a corner and come face-to-face with an Enderman who shakes and screams with rage, literally following you to the ends of the map until you kill it. I’ll pay the price of frantically drawing an arrow back on my bow to kill a Creeper before he gets too close. Minecraft’s survival mode isn’t just about building, but what you overcame to do so – kind of like real life.