“The unseen enemy is always the most fearsome.”
– George R.R. Martin, A Clash of Kings

My history with the unknown began at a young age. Monsters under the bed, aliens hovering outside of the window, ghosts in the old pipes of the house I grew up in – these things terrified the hell out of me. That’s not even counting the crazy dreams that would often haunt me the next day. I still have the occasional nightmare of the xenomorph from Alien chasing me, or a zombie horde closing in on any of the random houses or apartments I’ve lived in over the years.

The dreams that have the most impact are the ones that involve something being out there, be it out in the empty woods or down a long narrow hall. I’ve often used this fear and anxiety for things that I have written, be it prose, song, scripts, or even in silly songs and silly movies. Something that has always fascinated me is how much fear, anxiety and curiosity lead to creativity and creation. Looking out into the vast expanse of the ocean inspired some people to go out into uncharted territory of potential monsters and peril and explore; hundreds of years later looking out into the even more vast expanse of the galaxy inspired Jules Verne to write From the Earth to the Moon, which played a role in actually putting us in space less than a hundred years later. It’s truly amazing what the stuff of dreams can produce, and what motivates and inspires.

Something that has always fascinated me is how much fear, anxiety and curiosity lead to creativity and creation.

I still consider dreams to be an element of the unknown, because at the end of the day no matter how much scientific research has been done it still can’t be gauged what goes in, how it comes out or what the outcome will be. H.P. Lovecraft kept extensive journals of his dark and macabre dreams, many of which were just rough drafts of his twisted tales, all featuring monsters and cities containing ancient evil he would eventually capture on paper and which in turn inspired generations. James Cameron claims that the idea for Terminator came from a dream of being chased by a homicidal machine; Mary Shelley not only was inspired by a dream to create Frankenstein, but writes in the introduction to her novel: 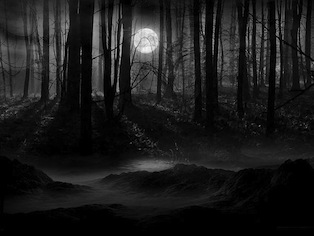 “When I placed my head upon my pillow, I did not sleep, nor could I be said to think… I saw ­– with shut eyes, but acute mental vision – I saw the pale student of unhallowed arts kneeling beside the thing he had put together. I saw the hideous phantasm of a man stretched out, and then, on the working of some powerful engine, show signs of life, and stir with an uneasy, half-vital motion.”

When reading these stories that came from the fear of simply leaving the house at night because various supernatural monsters and demons hiding in the darkness would feed upon you, one could dismiss this as fear and superstition from a bygone era. But turn on the news and hear about different kinds of very real monsters preying on people in the day and night. In their own way, books like Dracula or movies like Halloween are just the output of creative people separated by hundreds of years yet are inspired by the same fearful muse of what might be hiding in the darkness just ten feet away when you, say, take out of the garbage. Much like the desire to explore, common fears don’t really change with time. It’s just a different thing we want to explore or that we’re fearful of (what lies under that rock?).

It’s this fear – and anxiety especially – that I find motivates me, the fear of unknown things that hide in the darkness, waiting to jump out at you. While the jump scare in horror movies is something of a cliché, the lead up to it can be some of the most powerful dread that a creative medium can inspire ­– I still get the willies during the slow “chase scene” in Buffalo Bill’s dark underground dungeon maze in Silence of the Lambs. I can also recall the anxiety brought about by Jason popping up out of nowhere in the Friday the 13th game for the NES, or the first time I realized that shit was about to hit the fan in Castlevania II: Simon’s Quest when the sun would set, suddenly making it truly a horrible night to have a curse.

The fear of the unknown can be something as simple as leaving the house at night, or the bigger mystery of what lies ahead (and perhaps especially the inevitable conclusion of death). This all plays a part in the magnificent process of creation. Our fight-or-flight mechanism may no longer need to be applied to running from a sabretooth tiger, but at least we can write a crazy story about a 21st century person stuck out of time running away from one in some kind of crazy biodome in Antarctica. A discovery like that of the coelacanth, a prehistoric fish long thought extinct that was unearthed off the coast of Japan back in 2009, only confirms that even in the 21st century there are many hidden things waiting for us to discover. The unknown may lie deep in the vast ocean or in the cold empty recesses of outer space; it very well may still be in the woods in our backyard.