The topic of autism conjures a number of assumptions. Social ineptitude. Mathematical genius. An absence of empathy. Over the years, all forms of media have contributed to this stereotypical representation of the neurodevelopmental disorder, from Dustin Hoffman’s portrayal of an emotionally-disconnected savant in Rain Man, to The Big Bang Theory’s constant ridicule of Sheldon Cooper’s obsessive-compulsiveness. As with most lazy tropes, autism is painted in black and white; you’re either a textbook cliché, or you’re completely unaffected. The vast autistic spectrum gets reduced to a naïve binary division, the equivalent of dismissing arthritis and quadriplegia as one and the same.

Like autism itself, though, there is nuance to be found, if you’re willing to look for it. Recently, this nuance has come from an unlikely source: Watch Dogs 2, a big-budget AAA video game made by Ubisoft, the same studio that insisted a playable female character in Assassin’s Creed would have required too much work. In Watch Dogs 2, Ubisoft has put considerable effort into diversity and representation, with the main cast of Dedsec hackers including two black characters, a non-sexualized woman, and, most pertinently, an autistic character by the name of Josh.

At first glance, Josh appears to conform to the typical autistic archetype: he’s quiet and nervous but highly intelligent, with a tendency to take things at their face value. The game seems to set him up as the comic foil, the robotic sidekick that stumbles over metaphors and gets into trouble by taking everything too literally–‘Kill the lights? Why? What did they do wrong?’ Fortunately, first impressions are misleading. Josh is no more defined by his autism than Marcus is by his blackness, or Sitara is by her gender. These are but facets of a greater whole, and that fact alone makes Watch Dogs 2 a triumph of characterization. 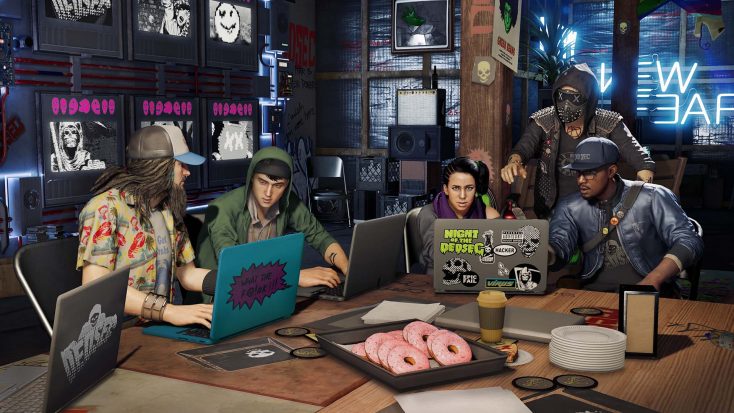 Take one of my favorite scenes in the game: Josh discovers that Invite, an evil Facebook-like social media corporation, has infested Dedsec’s phone app with fake bots, artificially inflating the group’s support and setting them up for a mighty fall. Josh freaks out, blaming himself for not spotting the bots earlier. He struggles to view the situation from his fellow hackers’ perspectives, unable to realize that they were just as responsible as he was for the slip up. Marcus and co. quickly remind him that they’re all at fault, and this helps him calm down. It’s a touching scene that highlights the impact of autism without over-dramatizing it, bringing the group closer together instead of alienating Josh for being different.

This is a constant theme throughout the game. Josh’s autism is always there in the background, informing his character but never defining it. Yes, he’s an incredibly talented hacker, but the rest of the group aren’t too shabby either. Yes, he might not understand Marcus and Wrench’s love of bad movies, but neither does Marcus understand Wrench’s intimate relationship with technology, nor does Sitara understand Marcus’ reverence for old-school hackers like T-Bone. Being different is completely normal in Watch Dogs 2, and the game does a fantastic job of letting you figure that out for yourself.

Rather than abusing it for a cheap laugh, Watch Dogs 2 leverages Josh’s blunt literality to accentuate the themes at the game’s core. After a successful operation uncovers reams of private data the unscrupulous Blume corporation was collecting from its users, Josh suggests they use the data to seek out potential recruits for bolstering Dedsec’s ranks. This leads to a thought-provoking discussion with Marcus on the ethics of fighting fire with fire. Josh points out that the Dedsec profiling app is already spying on people, with Marcus arguing that it’s a grey area, one with no easy answers. Here, Josh’s directness results in a valuable conversation, one that contextualizes a lot of the unanswered questions raised by the overarching story. Unlike the preternatural ability to multiply large numbers in your head, this is a far more realistic depiction of the nature of autism.

While it’s far from perfect, Watch Dogs 2 is a commendable step forward for the portrayal of autism in the entertainment industry. Diversity is beautiful, whether it be of the body, the spirit, or the mind.

Read Only Memories Made An Ass Of My Assumptions
Previous Post