On paper, we were Christians. Our mother took us to church every Sunday. We were baptized and confirmed, but in truth we were a family that worshiped science fiction. There was only one Bible on the bookshelf (next to a copy of Cosmos, I might add) but there were dozens if not hundreds of well-worn paperbacks littered around the house. Robert A. Heinlein, Isaac Asimov and Arthur C. Clarke were our saints. Their influence upon us was underlined by creases in cheap paper bindings and dog-eared pulp.

By then she knew that she’d never escape the atmosphere. Not strapped to the top of a rocket at least.

Michelle and I were weaned on Star Trek and inspired by Star Wars, but it was PBS that set my sister on the path. One afternoon an episode of 3-2-1 Contact informed her that real people went to space. She saw one of the girls from the show jumping around in a space suit and that was it. She knew that she wanted to be an astronaut. Around that time, we put Sally Ride into space and soon after that Christa McAuliffe and Judith Resnik became the first American women to die on the way into space. The Challenger tragedy didn’t put my sister off. It was reality.

Eventually she learned that there were height restrictions for astronauts. Not only that, you had to be healthy. Like really, really fit – like a jet pilot or something. For a while Michelle figured that science would be her path to space. She went to a magnet school for science and worked so hard that she graduated a year early with a full ride to USC. When Michelle got to California she changed her name to Rachel, after the android from Blade Runner and the X-Men’s Dark Phoenix. By then she knew that she’d never escape the atmosphere. Not strapped to the top of a rocket at least.

So she studied astronomy, then later planetary geology. When the notion of astrobiology was still uttered with a shrug my sister became one of the first students to study the budding science. Now she works for the SETI Institute, examining the properties of space ice – the stuff in comets that may have contained the building blocks that made life possible on Earth. Rachel’s contribution to science are “ground truth measurements” – laboratory readings that will act as a the ruler for probes measuring the spectra of space ice for decades to come. 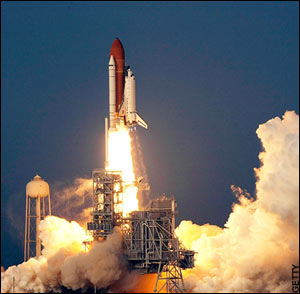 Things aren’t looking too great for space travel. The Endeavor’s recent victory lap felt as much like a funeral procession as a celebration of human ingenuity and achievement. Rachel never expected to get rich doing science that didn’t revolve around missiles and death rays but, even so, belt-tightening has made it tough for her to maintain her lab and staff. And yet, people like Rachel still dream of space. Several of her colleagues are in the midst of training for chalkboard missions for NASA and Space X. Hundreds upon hundreds of scientists and engineers still do the work of exploring our galaxy with probes and telescopes.

Rachel, now a mother, has let go of the idea of ever going to space. She’s not willing, like Ultima creator Richard Garriott, to give up millions and a piece of her liver to see her dream come true and mankind doesn’t seem quite as motivated to do great things like catapulting ourselves into the sky like we used to.

I called Rachel today to refresh my memory about our childhoods and her career. My niece, Helen, was quietly watching television as I joked with her mother about kinder, gentler methods of getting to space such as space elevators and chemically induced comas. Arthur, Rachel’s youngest, was still at day care. It’s the boy’s last year enjoying the excellent facilities at NASA Ames Research center – where there’s a miniature space shuttle in the playground for the kids to climb on. I’m sure at least one of Arthur’s classmates dreams of going to space. Perhaps by the time he or she is ready, humanity will be back in the mood to work together and do great things. Arthur, though, I’m pretty sure he wants to be a rock star.