The following is a reprint from Unwinnable Weekly Issue Nine. If you enjoy what you read, please consider purchasing the issue or subscribing for the a month.

Two old men lay in the dust of a back alley that winds its way thought a slum with the portentous name of Dying Slowly. After a moment of struggle, an icy stillness has settled over them as they realize they are both looking down the barrel of the other’s blaster. One of the men is Han Solo, off on an adventure after slipping away from his official duties. The other is the bounty hunter Boba Fett, who used that adventure to manipulate Solo into his crosshairs one last time.

This cliffhanger marks the end of the story “The Last One Standing,” by Daniel Keys Moran, which functions partly as a secret origin of the feared bounty hunter and as a final dance with his most elusive prey. The origin story is forgettable – proven by the fact that I have zero recollection of it – but the idea of these two old gunfighters facing off once more, despite the toll of the decades, is a delightful bit of cowboy drama. I can almost picture Unforgiven-era Clint Eastwood under the helmet. Did they agree to go their separate ways or did they kill each other? While I prefer the latter possibility, the mystery makes it one of the best stories to come out of the Star Wars Expanded Universe.

But did Boba Fett live to be an old man? Or did he die in the Great Pit of Carkoon, right where Han Solo knocked him in during Return of the Jedi?

Confusion over continuity in a shared universe is not unusual, but Star Wars is a particularly strange case that oscillates between slavish devotion to detail and willful blindness. Boba Fett is the embodiment of this phenomenon.

Fans see Fett as the most notorious bounty hunter in the galaxy. His allure most likely had its origins in the mail order exclusive action figure offered before the release of The Empire Strike Back – if this was part of the promotion, surely he was a pivotal character. Indoctrination continued from there, with plenty of flavor text in children’s books and on toy packaging to back it up, but most of this trades on Fett’s admittedly badass armor. His brief appearances in the films don’t bear out this characterization. 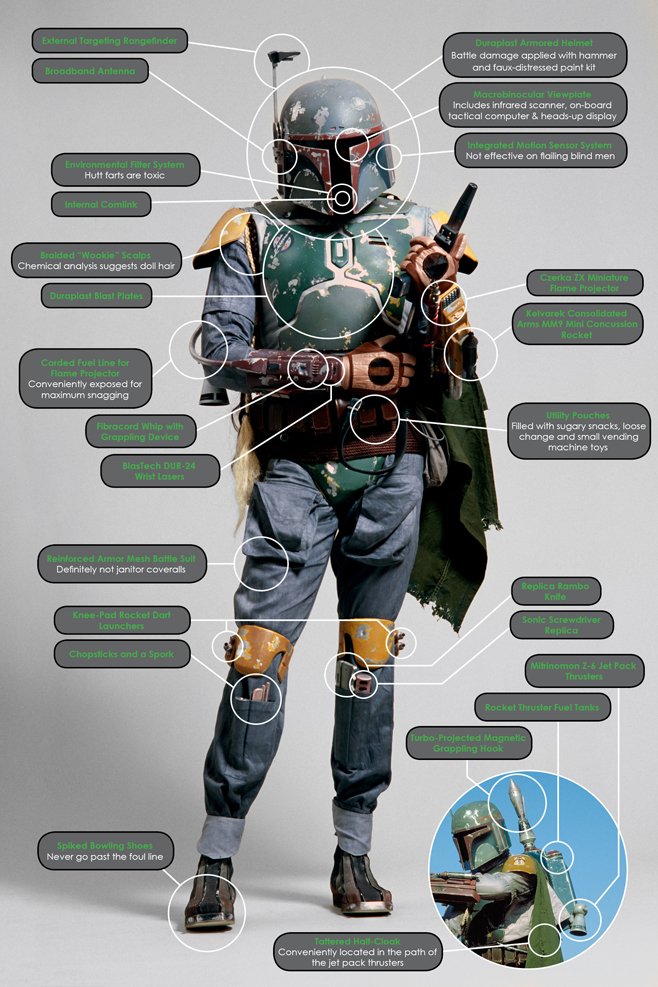 In his very first appearance, Darth Vader admonishes the bounty hunter with a schoolmarmish wag of his finger: “No disintegrations!” Fett gets cool points for shrugging it off with one of his few lines of dialogue, but it recently struck me that vaporizing your targets is a poor practice in a trade that requires proof of death. I wonder if Fett had a dustpan tucked away in that utility belt for those occasions.

Fett does cleverly track Han Solo to Bespin, but he doesn’t actually capture him. That falls to Vader, who traps the rebels by using the threat of Imperial reprisals to pressure Lando Calrissian into betraying his friends. It is Vader who tortures Han Solo and Vader who imprisons the smuggler in carbonite. Solo may not be worth anything to Boba Fett dead, but it is hard to say standing around whining about it is very becoming of the galaxy’s greatest bounty hunter.

In Fett’s final scene in The Empire Strikes Back, he has a moment of competence when he detects Luke Skywalker shadowing him, but I chalk this up to his armor’s elaborate sensor array rather than any hunter’s acumen. He certainly doesn’t show any of that in Return of the Jedi.

Why did the great bounty hunter stuck around Jabba’s palace after delivering Solo and being paid? An undemanding gig as a bodyguard. When the action starts, Boba Fett is beyond inept. He flies from the higher ground, a position of tactical advantage, to land directly in front of a Jedi with a lightsaber, who immediately cuts his blaster rifle (a long-range weapon) in half. Fett then uses a grappling hook to entangle Skywalker who is, again, wielding a sword that literally cuts through anything before a ricochet briefly knocks the bounty hunter out. When he recovers himself, he attempts to use a wrist blaster to snipe Luke but is foiled when Han Solo blindly knocks into the jet pack that, for obscure reasons (are there seriously no in-armor voice overrides for the jetpack?), malfunctions, sending Fett careening into the side of Jabba’s sail barge. From there, he falls into the sarlacc pit and his well-deserved doom.

Boba Fett is not alone in his ineptitude – many characters in the Star Wars movies are terrible at the jobs they are supposed to do well. No one cares about C-3P0’s matters of protocol, stormtroopers can’t hit the broad side of a bantha, Han Solo is the least subtle smuggler in the galaxy (a profession he entered after winning the Millennium Falcon from that piss-poor gambler, Lando Calrissian) and for all their mystical abilities, I can’t think of a single Jedi who didn’t wind up acting the fool. In most cases, this incompetence is endearing.

The difference is that Fett, as portrayed in his fictional life outside the movies, is a calm and effective operative. How’d that happen?

It is hard to imagine a world free of the countless strains of Star Wars cross-pollination. Yet, the years following the end of the merchandize push for Return of the Jedi were largely absent of Star Wars. Those horrible Ewok TV movies and the short-lived Saturday morning cartoons failed to keep audiences engaged with the franchise. Marvel cancelled its long-running comic book series in 1986 and the Star Wars fan club newsletter, Bantha Tracks, shuttered in 1987. Star Wars action figures languished in clearance sections of KB Toys across the nation. There wouldn’t be a new mainstream Star Wars story told until Timothy Zahn’s novel Heir to the Empire was released in 1991.

The home fires were kept burning by the West End Games roleplaying game books, which exhaustively chronicled every known bit of the Star Wars universe. The level of detail is alarming – the Imperial Sourcebook, for example, maps out the operational structure of the Empire’s entire military apparatus in methodical detail, complete with painstaking schematics of all their hardware. In fact, when Zahn began work on his novel, Lucasfilm sent a box of WEG sourcebooks to use as reference.

As an RPG setting populated with established fictional characters, WEG had to find a way to encourage players’ desire to explore the movie’s universe while not burdening the game master with endless, universe-breaking requests (ex: “Let’s go to Dagobah before Luke gets there!” “Let’s alert the Imperials to the Bothan spy network for a reward.”). They first went about this by giving the movie characters statistics befitting their status as living legends – they were so high that no player character could ever match them. They also introduced analogues that were similar enough to the movie characters but wouldn’t be missed if they met with untimely ends.

In this way, Boba Fett became a badass because of his statistics and the three comprehensive pages describing every gizmo and gadget he had in his Mandalorian armor and on his ship, Slave I. WEG also introduced players to a Fett impersonator named Jodo Kast for game masters to use when a scenario called for a (less-lethal) stand-in for Fett.

Kast was an ex-Alliance SpecOps agent who defected to bounty hunting. He was neither particularly smart nor particularly talented. To make up for that lack of prowess, he acquired a suit of Mandalorian battle armor and let Boba Fett’s deadly reputation do the heavy lifting. Kast was entirely inept, though, and his bungling is more in line with Fett’s portrayal in the movies than Fett’s inflated RPG stats. Faced with the choice between loving an oaf in cool armor and a badass in cool armor, future writers chose the badass every time.

None of this is fan fiction, either. Every story from comic book to roleplaying game that bore the name Star Wars was subject to the extensive fact checking of Lucasfilm Licensing and the Lucasfilm Story Group. These folks were charged with ensuring that every Star Wars story was another consistent brick in an increasingly complicated wall of continuity. Their blessing was a bestowing of canonicity and implied the approval of King George himself.

Of course, Lucas always admitted that he never understood the bounty hunter’s popularity with the fans. If he did, Fett might have fared better than getting dumped into Tatooine’s spiky navel. As for Fett’s evolution in the Expanded Universe, Lucas remained ambivalent until he decided to muck it all up with Attack of the Clones.

Admittedly, I have not seen Episode II – judging from reviews at the time, I don’t think my poor heart can take it. Still, it is here that we are introduced to Jango Fett…another feared bounty hunter and assassin. So feared is he that the Emperor uses him to clone his army, but a brief scan of YouTube clips doesn’t inspire much confidence; this perhaps explains why stormtroopers can’t actually hit anything. At any rate, Jango’s death, a beheading at the hands of the Jedi Mace Windu, is just as ignominious as his son’s.

Of course, “son” is too simple a word for the relationship between Jango and Boba. Rather than being a normal offspring, Boba is an unaugmented clone (I assume this means his growth wasn’t accelerated, like that of the clone troopers) of his father, which makes a mess of the (again, admittedly forgettable) origin laid out by Daniel Keys Moran. If that story is invalid, what does that mean for the Moran’s earlier story, “A Barve Like That?” Here Moran commits the ultimate fan service: after a bit of steeping in the sarlacc’s digestive juices, authorial caprice and a liberal application of explosives deliver Fett from his bad death and he escapes into countless future stories.

With Disney producing a new set of Star Wars movies, including, if the rumors are true, a stand-alone Boba Fett movie, this becomes an important question. All the press materials that have surfaced in connection to the J.J. Abrams-helmed feature drip nostalgia, everything is low contrast and cozy, like the production photos from A New Hope. Coupled with the fact that Disney recently announced that none of the new movies would draw from material from the Expanded Universe, the implication is that Abrams is returning the Star Wars franchise to an earlier, more perfect era.

But which one? If the movies are the only true canon, then Boba Fett is a bungling idiot. If the Boba Fett movie isn’t going to be a slapstick comedy, his characterization has to come from the Expanded Universe. And, if a relatively minor character like Fett is the source of such confusion, how does a team of filmmakers reconcile the rest of the fictional universe? After all, there is a generation of fans who grew up adoring a set of prequel movies older audiences dismissed as terrible.

In truth, most people won’t notice. In a quote attributed to Moran on the Wookiepedia, he explains his thoughts on his role in the Expanded Universe:

“I wrote three Star Wars stories for Kevin J. Anderson, back in the mid-late 90s. I’m proud of them: I did my best with them. They were stupid in places…But I did what, to my understanding at least, Lucas had done with Star Wars: hid the stupidity beneath sheer force of conviction, and charged ahead. And I think it worked.”

That might be just enough for the future of Boba Fett.

Follow Stu Horvath on Twitter @StuHorvath or tell him how wrong he is about Boba Fett in the comments.