There are only so many things you can do with a 3-year-old. I learned that lesson the hard way last year when I agreed to take care of my nephew, Arthur, for a week while my sister and her family went to France. His cooperation was begrudging and only earned through much cajoling, bribery and negotiation. Getting him dressed was a hassle. Making sure he was fed properly was tricky. And trying to lull Arthur to sleep was like trying to tickle an alligator. Many tears were shed and some of them were his. But that’s how 3-year-old kids roll. My buddy Jordan has a son who is just as prickly. Luckily, they grow out of it.

I was able to achieve some small victories. Arthur really dug playing Double Fine’s Sesame Street game for the Kinect. So I set that up every day and let him wave his arms around for a half hour — anything that occupied the kid longer than five minutes felt miraculous. Just for kicks I put on an episode of the ’60s Spider-Man cartoon and told Arthur it was a Kinect game as well. He waggled his hands through the good part of an episode and could hardly tell the difference. That’s half the problem hanging out with a 3-year-old. They’re not terribly discerning. They dig Caillou, dinosaur-shaped chicken nuggets and merry-go-rounds that spin at .5 miles an hour. I know it sounds selfish, but there’s not much in the life of a toddler that feels nourishing for adults. 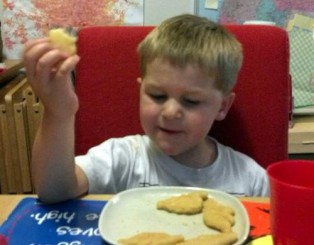 I hear similar complaints from lots of parents. Arthur’s dad, Ross, recently confided to me he can’t wait for his son and daughter to get a teensy bit older so they could play better games together. Chutes and Ladders and the Five Little Monkeys Jumping on the Bed board game just aren’t that stimulating. On a good day, the chance to spend some time with the kid is enough to make those shitty games tolerable. On a bad day, it’s just another soul-crushing way to trigger a toddler meltdown. To Ross’ credit, he came up with the clever idea of turning his son onto Mario Kart: Double Dash!! Ross throws the boy into the back of a kart and zips off. Arthur’s job is to fire off turtle shells and mushrooms. For whatever reason, the zooming scenery and minimal interaction are enough to keep Arthur occupied. And Ross gets to drive and enjoy a modicum of fun – after all these years Double Dash is still a blast to play.

Arthur and Ross make a good team. Dad coaches his boy, telling him when to fire off the mushroom boosts for maximum efficacy. Miraculously, the kid listens! On a recent visit, I was able to share the couch with Arthur and race through all four  of the game’s tournament cups. That was most time I have spent with Arthur doing any one thing, if you don’t count arguing. It was really nice. I felt the most simpatico with my nephew at the beginnings of races when the two of us managed to step on the gas in unison and trigger the boost. Our kart would barrel ahead of the pack. Then Arthur would celebrate by pulling a player taunt. Arthur’s signature move is the Wario ass slap. After so many struggles getting his kid fed, dressed and kept alive it felt good, if only for a brief moment, that the two of us could do anything in unison.

Of course, we didn’t always get the boost. “You didn’t press the green button,” Arthur would accuse. “No,” I’d reply. “You’re clearly the child. It had to be you who didn’t press the green button.” I’ve been playing this damn game since before you were born, kid. The friendly trash talk and refreshing instances of cooperation were cool. I was more surprised that I could spend 45 minutes on a couch with a kid and not feel like he was getting all the stimulation. I guess I’m a little greedy. I know kids are supposed to be magical and all. Just being within their pure, childlike aura is supposed to fill you with joy. I must be immune to their fairy dust. I get bored watching children’s TV and playing silly games in the backyard just as fast as they get bored when the grownups start talking about Whole Foods or NPR.

I can see the promise in Arthur, though. He’s just a little dude now, good for chucking turtle shells and not much else, but who knows what he’ll eventually be able to accomplish? All my friends with kids have stories. Tim bought a copy of Risk: Legacy to play with his kids. He already spends a ton of time playing Minecraft with them. Aaron is training his two sons to play Portal 2 co-op missions together. I guess that’s what my dad was thinking when he took me camping and fishing. He was into all that outdoorsy stuff that fathers and sons are supposed to enjoy together. I put in my time, but I never really dug sitting around waiting for nibbles while my dad drank cheap beer. I still can’t say if that proximity made a difference in my life. Some people just don’t have much in common – no matter how close they are in age.

Me and Arthur? I think we have a future. I can see myself sitting down in front of a  TV and saying, “You’re finally old enough to play Left 4 Dead. Put your back to the wall, keep moving and make sure your uncle doesn’t die.” The kid does have a birthday coming up soon.

Pretension +1 is a weekly column about the intersection of videogames, pop culture and our short, fleeting lives. Follow Gus Mastrapa on Twitter @Triphiban.

Unwinnable Presents: Unlistenable Episode 38 – One for the Bronies