I recently came across a Kickstarter campaign for a comic called Destiny’s Fate. It’s a mini-series about time travel, teen rebellion and ninja business. The creative team is made up of writer Devin Leigh Michaels, artist Mauricio Vargas-Martinez, colorist Rodrigo Tobias Eyzaguirre and letterer Taylor Esposito – all of whom have some impressive resumes and, as evidenced on their Kickstarter page, a love for comics.

Devin Leigh Michaels was kind enough to speak with me about the series. 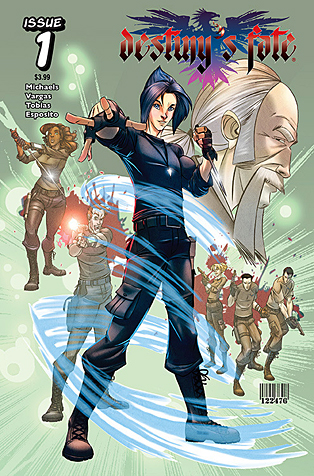 Unwinnable: In a nutshell, what is Destiny’s Fate?

Devin Leigh Michaels: A time-traveling assassin returns home after seven years with a mission to kill the defenders of time – his parents. Does he kill them, and does he have a choice in the matter?

Unwinnable: How long have you been working on this book?

DLM: I originally wrote the story back in college during Senior Project: Writing, but I began writing the actual comic in December.

Unwinnable: Would you go into the adaptation process a bit? Was it originally a prose piece or a script?

DLM: The original piece of fiction was a prose piece, a 20-chaptered novel. I formulated the novel into three acts – “assimilation, infiltration and annihilation” – like the mission Kainoa’s grandfather gives him in DF #1. Then, I looked at each chapter as a single issue.

When I went to write Destiny’s Fate, the limited comic, I took the first arc – assimilation – and made that into the entire mini-series. To make sure I had enough action, exposition and emotion, some scenes had to be switched or eliminated. Issues #1 and #2 remained virtually unchanged. An American Civil War battle with Kainoa and his uncle Sawyer was moved from chapter five to issue #3, and issue #5 was almost completely new, with Kainoa and family traveling to ancient Rome. Issues #6 and #7 have been sliced and diced and taped back together.

The hardest problem with adaptation was deciding what to keep and what to let go. And I mean “let go,” because characters are shaped with quirks that are twisted into the plot, and it’s hard to eliminate complete sections. However, comics have a time element that novels really don’t, so it was important to keep what was essential to the plot with no frivolous elements.

Unwinnable: What brought you to Kickstarter?

DLM: I’ve been on Twitter for quite some time, and I’ve seen and backed comic projects on the Kickstarter. When it became necessary to get funding for this comic, Taylor (my letterer) and my friend Arch suggested Kickstarter, and it seemed like the perfect opportunity to help with the fees and get publicity for the book.

Unwinnable: How did you, Mau, Rodrigo and Taylor come together?

DLM: I met Mau Vargas a little more than a year ago when I was writing scripts to post online and Mau did covers for me. When Noel, CEO of IC Geeks Publishing, asked me why I wasn’t doing a comic, I didn’t have an answer and decided to do one. Mau was my first and only choice for the project. Rodrigo Tobias is Mau’s friend and owns his own studio, Graphic Leak, so he joined the project as colorist. I met Taylor Esposito, formerly of the Marvel Bullpen, on Twitter, and he read Mau’s and my conversation about the book. He offered to do letters, and I snatched him. 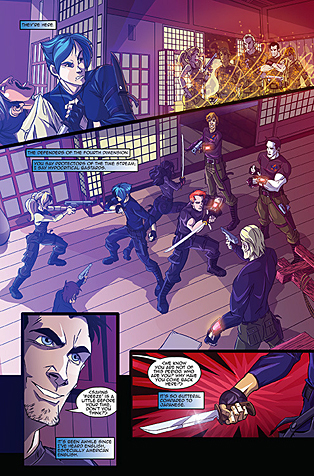 Unwinnable: How long has the group been working on the project?

DLM: Mau received the first script back in January, and Taylor lettered as the pages came in. Rodrigo came in last but sped through the pages for a July deadline to ICG. We’re almost done with the second book.

Unwinnable: Destiny’s Fate is a pretty high concept book – a future created by choice, versus a future based upon a predetermined outcome. What makes this the story you want to tell?

DLM: I knew I wanted to do a story about time travel because it has fascinated me, and I remember reading this article that spoke about a “force” that keeps someone from committing time paradoxes. I thought, “What if this force was a group of people?” The Defenders were formed and Kainoa, destiny personified, their enemy.

Unwinnable: The logo has a very Squaresoft look to it. Are you a Final Fantasy fan?

DLM: I wish! My last game console was N64, and I really, really want Wii! (Probably won’t get it this decade).

I originally drew a crude phoenix with a “4” in blue fire and gave it and five fonts I liked from Blambot to Mau. Mau really took the idea and came up with the logo. The coloring came from Kainoa’s hair (blue) and a phoenix (red/orange). They’re also complimentary colors on the color wheel.

Unwinnable: How has the response been from the comic community thus far?

DLM: Well, my team and I received a late start due to SDCC, but we just signed our first retailer last night. We’ve had positive discussions from two more, and we have feelers out at more than a dozen other retailers.

So far, our Kickstarter campaign has attracted retweets from such talent as Mike Deodato Jr., Kyle Higgins, Gail Simone, Marcus To, Mikel Janin and Joe Caramagna. Overall, the project has been retweeted more than a thousand times this past week. We’ve been backed by the likes of James Tynion IV, Joey Esposito and Michael Malkin. So it’s been a great experience, and I hope people get to see the book and enjoy reading it as much as my team and I have enjoyed making it.

Comic books and Kickstarter make for natural bedfellows. Kickstarter allows comic book creators, both known and unknown, a chance to bring their stories to audiences and act as their own publisher and marketing departments. In a business that relies heavily on preorders, it’s a natural fit.

The Destiny’s Fate Kickstarter project has 15 days to go, so go and check it out!

Ian keeps losing spambot followers on Twitter. This makes him sad. Follow him @IanGonzales and cheer him up a bit.