Writer Mark Waid takes a step back with his latest issue of Daredevil, slowing down the pace of his latest arc and focusing instead on building the history between Matt Murdock and his faithful assistant, Foggy Nelson. The purpose of the issue is to give readers the insight they need to grasp the depth of the emotional struggle Matt is about to face. The results are sad, emotional and a perfect transition to the next chapter of Matt’s life.

What Waid does best in this issue is show readers that he has a firm grasp of Daredevil lore. I have to admit that my knowledge of Daredevil’s rogues’ gallery is spotty at best, but Waid plays with the quirky characters of the ’60s and ’70s, crafting a narrative that utilizes this uniqueness to show Matt’s abilities as a detective and his desire to do well by Foggy all the time. 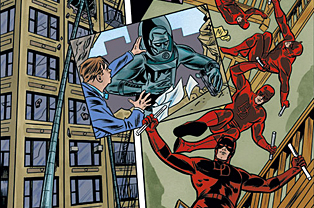 The history of the two characters is fleshed out a bit more, and the final few pages – where Foggy does something incredibly sweet for Matt – brought tears to my eyes, both because of the storytelling and art. Matt loves Foggy, and the heightened emotional bond adds weight to their falling out.

Michael Allred is an interesting choice for the book. He’s not gritty like Chris Samnee, and while his style is similar to Paolo Rivera, Allred’s art is cleaner. Characters are shadowed heavily yet softly outlined. Allred almost shifts styles, however, especially when he illustrates the fight between Matt’s father and his boxing opponent. “Battlin’ Jack” Murdock is given exceptionally detailed treatment and while Allred’s art looks simple, his abilities are evident.

Daredevil is probably my most consistent buy. It’s got great storytelling and very talented artists each issue. I’m curious to see how Waid will resolve the issues between Matt and Foggy, especially considering how insurmountable they seem by the end of the comic. But knowing Waid’s abilities, readers will be pulled through the emotional turmoil with Matt as he tries to find a way to reconnect with his best friend. 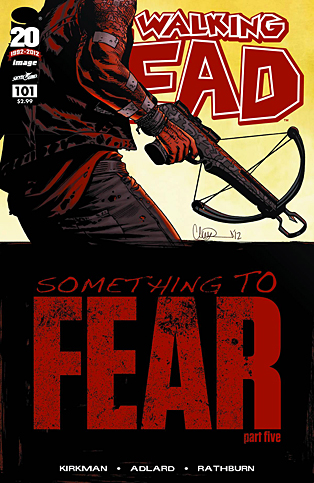 I recently heard a commentary about The Walking Dead #100, where a reviewer was questioning why Rick stood by and let a very beloved member of their group get murdered. We don’t get the answer in this issue, but it’s like writer Robert Kirkman assumed people would have these gripes, and he goes to lengths to address them. I can’t say this is a great issue, because after #100, this doesn’t have the same emotional scarring. It is, however, an example of Kirkman getting his pieces into place before he sends them all to hell.

Walking Dead #101 is full of intense conflicts and powerfully emotional confrontations between characters, but the resolution is foisted upon readers too quickly. There’s almost no time given to let the dust settle before characters basically move on. Even though a major character died last issue, Kirkman drops this thread as he moves more towards the revenge Rick & Co. are going to get, especially given the final page of the comic and the big chip Rick will play against Negan.

I also felt like Charlie Adlard was restrained in this issue. Since much of the action has already occurred, Adlard gets the job of depicting a narrative more than an action-filled tale. He does this successfully, but where he got an opportunity to display his talents in the last issue (specifically around violence), he’s now relegated to drawing standard he said, she said panels.

I didn’t expect issue #101 to be better than #100, but I also didn’t expect it to be a letdown. I think of the issues surrounding #50 and how each issue was greater than the last – in art, narrative and dialogue. But this issue loses all the momentum that was built, instead opting for a story that aids the focus of the arc, but which fails to keep the emotion alive. 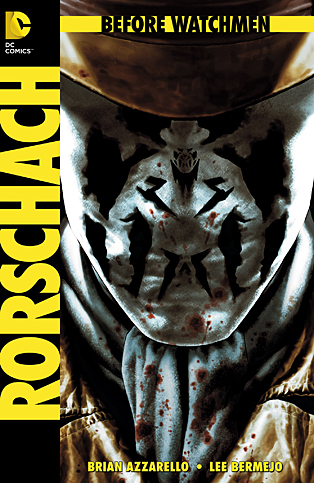 Bannen’s Book of the Week: Up to this point, I’ve been pretty hesitant to say that an issue of any Before Watchmen comic has been good enough that it was the buy of the week. While I’ve enjoyed Minutemen and Silk Spectre, they never blew me away on initial viewing. Rorschach, however, is a beautiful mixture of strong storytelling and impressive art, more than worthy of being the book of the week for this reviewer.

In other Before Watchmen books, Rorschach seems like a one-dimensional character. He’s ill-tempered, sarcastic and apathetic. But with Brian Azzarello’s writing, Rorschach feels like more than a parody of himself from Watchmen. Azzarello captures Walter Kovacs’ voice and gives the character drive and determination, both traits which are lacking in Nite Owl. Rorschach is brutal and indifferent. While Azzarello teases Walter’s history (in a way that’s not so patronizing as a wink-wink, nudge-nudge allusion), he doesn’t make this the impetus for Rorschach’s crusade. With Azzarello, Walter Kovacs is uncompromising and dogged – two traits which carried him far in Alan Moore’s story.

While fans will recognize Watchmen in Rorschach, the substance isn’t so heavy-handed. Rorschach is a book that has its own two legs to stand upon, and Azzarello’s writing is confident in its portrayal of the character. He doesn’t rely on the subject matter the way other writers have.

Additionally, Lee Bermejo is the perfect choice for this book. He draws with gritty realism (similar to his art in the graphic novel, Joker), yet his imagery is clean and polished (like his art in Batman: Noel). Savage violence still abounds, and every broken bone and bloody face is conveyed with palpable intensity. Visually, the book is stunning, and every page is heavily detailed. While the tale is straightforward, the art is rich and layered, easily worth a second or third viewing to take in the visuals.

This is one of the few Before Watchmen books about which I was very excited. The wait has been worth it, and the story flows with originality and self-assurance. My only complaint is that this is only a four-issue series instead of six. I only hope every issue is this good.

An Interview with Mark Torres