One of the best parts of reviewing comics is being surprised. Especially when your preconceived notion of a comic is completely thrown out in favor of a new lens and a more open mind.

I’m not a huge fan of Scott Lobdell’s Superman, partially because I think it’s cumbersome to read. Lobdell likes narrative boxes, thought boxes and excessive dialogue. All of these words tend to weigh the comic down, especially when they try to be cleaver or comedic (as in a Deadpool comic). 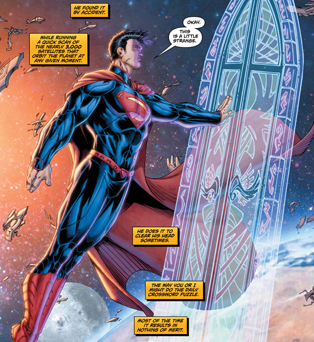 But this is a good read. Lobdell eschews some of his usual lightness and instead makes Clark an imposing character. The story nicely transitions between characters, and Lobdell definitely captures the dual natures of Clark Kent and Superman. While Lobdell has a tendency to pack too much into the comic, he really streamlines the story this time around, and the issue is better for it.

Lobdell also creates a pretty intriguing mystery, one that I’d be glad to see through. I worry that he’s going to bring in too many characters, though, as he already hints at Red Hood and the Outlaws coming into the tale. The singular focus works well in this issue, and I’d hate to see the story try to juggle too many elements.

Part of the praise should also go to Brett Booth, an artist whose style I’m still getting used to. Dammit if he doesn’t draw one imposing Superman. The final pages of the comic, combined with Andrew Dalhouse’s colors, give the imagery some depth and add a level of ferocity to the character. I’d like to see more of this art, especially if the action it involves will bring out this kind of detail.

I do have to confess that I’m not totally sold on the series, but I’m definitely more intrigued than I’ve been before. I hope that Lobdell and Co. can make the rest of the series better than this issue (which is still really good), because Superman needs more good press.

I’m looking forward to seeing how this plays out, and that’s something I haven’t thought about a Superman comic in a while. 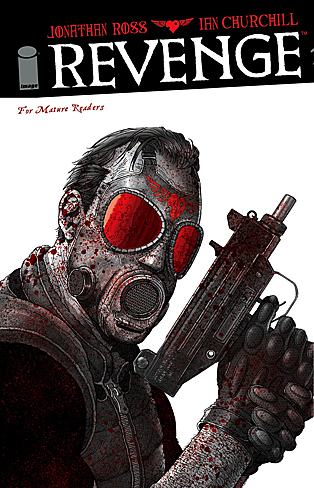 Revenge is a case of life imitating art. The story focuses on an aging actor named Griffin Franks, a mediocre thespian who found a niche in the graphic action realm. Think Bruce Willis or Sylvester Stallone in their heydays – men who were commanding at the box office and who exploited their métier for all it was worth.

But something happened along the way: they got old. And suddenly, they couldn’t be the action stars they once were. So the main character, Griffin, finds himself in similar waters, wanting to hold onto youth for the sake of his career and his overly sexualized wife.

Yet much like the movies in which Griffin stars, Revenge is so over the top and lands with an ugly thud. Its shallowness keeps the story from getting us to identify with the lead character or to even care for the situation in which he finds himself.

Jonathan Ross goes all out with everything. The comic is full of brutal violence, graphic sex and nudity and a thinly sketched plot. It takes Griffin from movies to real life so that he will eventually get the opportunity to take his big screen role and put it to good use: hunting down the people who wronged him.

The concept, similar to John Woo’s Face-Off, is outlandish and cumbersome. The villains even fall into the trap of explaining to the hero what their plan is, how they plan to carry it out and the ways in which they can’t be stopped. If this is meant to be an ironic critique of the film industry, it doesn’t come across as one. Instead, it reads as flaccidly as some of the b-tier movies that Hollywood releases every winter.

The art doesn’t fare any better, as Ian Churchill’s creative panel stylings are overshadowed by the continuous nudity and gore he has to depict. Plus, due to how graphic everything is portrayed, the violence loses its punch. By the end, you’re completely desensitized to the overtness of the style.

Griffin Franks is as hollow a lead as many action stars today, so even when Ross tries to interject some humanity into the character, it feels forced. I have no desire to see Griffin enact his revenge (which I’m sure he will), because everything about the comic seems standard fare for R-rated action these days.

So if you like that kind of oeuvre, read The Revenge. As for me, I think I’ll pass. 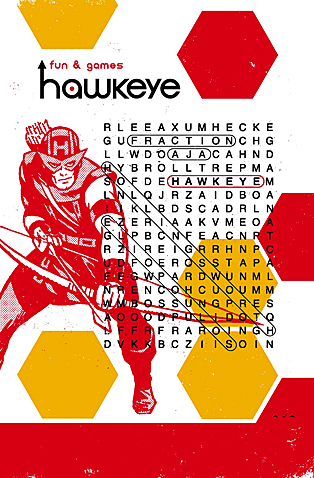 Bannen’s Book of the Week: There’s so much good about this comic, it’s hard to know where to begin.

Matt Fraction has penned what is easily the best comic of the series so far. It’s taut and gripping, and it’s an exercise in how to write a comic. Every panel, every word and every action is not wasted. And the ending is something I personally didn’t see coming, one that immediately elevates the comic beyond its comedic roots to something deeper and darker.

Until now, Clint has had a happy-go-lucky way about him. He’s used sarcasm more than his weapons, and the bumbling nature of his enemies has made his time more entertaining than threatening. That is, until his newest nemesis finds a way to exploit his jocularity and to find Clint at his most unguarded – and then strike.

The comic is really a series of cobbled together panels, which makes reading the issue quick. My eyes grazed the pages more than stuck to them, and that’s really due to Fraction’s brevity. Many of the sequences are a series of overlapping dialogue panels. They are so cleverly placed by letterer Chris Eliopoulos that they give the comic an organic pacing, one that beautifully transitions the story from the beginning to the end.

Of course, David Aja’s art adds a cinematic level to Fraction’s story. He uses establishing shots and action sequences with aplomb, creating a kinetic energy to the comic that helps build the emotion and suspense. Aja and colorist Matt Hollingsworth use light and shadow for this effect, and their efforts create some of the most striking imagery the series has ever had.

A comic like Hawkeye is the kind of comic that makes you love the medium. It’s a comic that reminds you of the power of the storyteller and the symbiotic relationship he/she has with the artist. Nothing in this comic is flawed, and that’s why Hawkeye is the pick this week. Many writers and artists could learn from Fraction and Aja. As a fan, I can’t be more grateful for their work. 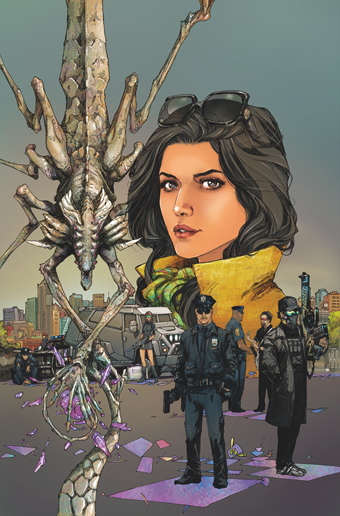 (DC — writer: Marguerite Bennett; art: Emanuela Lupacchino, Meghan Hetrick, IG Guara, Diogenes Neves)
It’s hard to talk about Lois Lane. Any time she – or any other popular superheroine, for that matter – appears in media, the expectations are so high, and the criticisms so inevitably harsh, from both her fans and her detractors.
I admit that I wanted to like Superman: Lois Lane #1 even before I read it. But I also liked it even after I finished it. Marguerite Bennett delivers a story framed perfectly around Lois Lane’s unique character and strengths, with a predominately female supporting cast to boot.
The story starts with a flashback to Lois’s childhood as an army brat, where her little sister Lucy has an unfortunate habit of climbing onto tall things and then insisting that Lois catch her when she flings herself off. Cheesy as it sounds, this device immediately establishes the dynamic of Lois and Lucy’s relationship, and sets the tone for the story to come.
In the present, Lucy seeks Lois out again when her girlfriend goes missing. Lois takes the case, and it was fun to see her call in favors and drop in on unsavory contacts in order to get the answers she needs. Unfortunately, the case itself feels cliche even before Lois gets to the mutant monsters and obscure government research facilities behind the disappearance.
As bright as Lois’ character shines, the other characters do little more than bask in her light. On the one hand, this can make the story feel stilted, as Lois moves between characters that seem designed to be what she needs, when she needs it. On the other, it keeps the focus on Lois, letting her cleverness and protective love of her sister be the pivot upon which the entire issue turns. It’s also worth mentioning that Superman: Lois Lane features only a single panel with Superman himself, instead focusing on the characters that usually comprise the Man of Steel’s non-powered supporting cast. Between Lois, her mother, her sister, and her sister’s girlfriend, the book also passes the Bechdel Test with flying colors.
In the art, too, almost every panel pivots around Lois, privileging her gaze and presence above any other characters and never once objectifying her. Though the unusually high number of artists involved in the book means the art can feel inconsistent from page to page and scene to scene, they all do an excellent job of visually conveying Lois’s status as our protagonist.
As flawed as Lois Lane #1 was, it seems like many of its problems could have been fixed if the creators had more than a single issue in which to tell it. As a one-shot, even an extra-long one, writer Marguerite Bennett has little time to do more than establish Lois’s character, let alone explore it. Ultimately, Superman: Lois Lane left me wanting more Lois Lane. And if that’s the book’s biggest problem, then I’d call that a win for DC Comics’ most famous non-superhero heroine.
– Jill Scharr

A Dream of Flying