I’m starting to have a sneaking suspicion, one that will no doubt make me an Unwinnable pariah, no longer able to show my face at Geek Flea or even so as much as leave an anonymous voicemail on the Unlistenable podcast hotline: 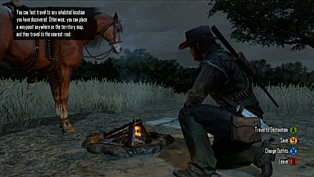 Sure, as the Rookie of the Year, everything I say about anything should be taken with a grain of salt. And until last week, I had only played Grand Theft Auto IV and nothing more.

But now I have Red Dead Redemption.

And I’m starting to see a pattern.

Don’t get me wrong – GTA IV made me laugh about as hard as any videogame I’ve ever played. And the controls in Red Dead are awesome – shooting bandits from a moving stagecoach has been nothing short of a revelation.

But unless I’m doing something wrong – and I’m not so sure I am – the time between those shootouts seems interminable.

Here’s what I have spent the majority of my time doing:

• Listening to Nigel West Dickens talk complete and utter bullshit, making my otherwise no-nonsense character seem like a pussy for suffering him.

• Helping Bonnie MacFarlane round up her cattle.

• Playing poker. (Admittedly some of the most fun I’ve had in the game.)

• Watching an animated silent film at the movie house. 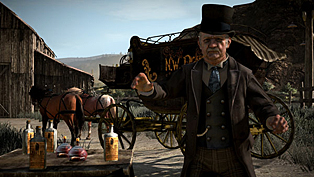 • Wondering, if I were to write a Rookie of the Year column about how John Marston is a less frenetic Nick Swisher, whether a single Unwinnable reader would have any idea what I was talking about.

• Drowning, because I thought there was even the slightest chance I could swim.

• Listening to Irish talk complete and utter bullshit, making my otherwise no-nonsense character seem like a pussy for suffering him.

• Building mini-campsites and waiting through the cutscene so I can finally fast travel.

• Not being in the right place to build a campsite, and instead riding my horse for miles and miles and miles to get to where I’m going, only stopping periodically along the way to pick desert sage.

• Getting tired of my horse and trying out the stagecoach taxi instead, and realizing, if I choose not to skip to my destination, that it will slowly, interminably, make its way across the dusty expanses, creaking and cracking as I press the X button to – get this, daredevils! – change my seat …

• … just so I can get to the next checkpoint and listen to Dickens or Irish talk complete and utter bullshit, making my otherwise no-nonsense character seem like a pussy for suffering them.

• Did I mention Dickens and Irish may be the two most annoying videogame characters of all time?

All that, and I can’t even sleep with the Armadillo saloon whores because, “I’m a married man.”

It didn’t take long for Red Dead Redemption to remind me why I stopped playing GTA IV, a game whose highlights include: 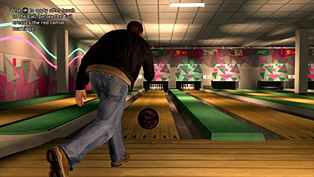 • Picking my date up at her house.

• Sitting in a comedy club.

• Driving my date back to her house.

• Listening to Roman talk complete and utter bullshit, making my otherwise no-nonsense character seem like a pussy for suffering him.

No, I’m not putting Red Dead down anytime soon. And I’m sure I’ve only skimmed the surface of what is surely the rich and robust adventure that awaits me.

But Skyrim was an even more vast world of adventures and side quests, and while some of them were less than lofty – and consenting to watch a loading screen every time I went through a door bordered on masochism – I was nearly constantly entertained, intrigued or generally impressed, from Day One on.

Does this mean I’m alienating all of Unwinnable’s readers (and specifically its editor-in-chief)? Perhaps. But it’s worth it in my never-ending quest to speak truth to power.

Now excuse me while I join up with the MacFarlane Ranch nightwatch.

For the fourth time.

Matt Marrone’s goal is to complete Red Dead – but not if it means spending the rest of his summer searching for patches of wild feverfew. You can follow him on Twitter @thebigm.

An Interview with Mark Torres