When it comes to the “Big Four,” I am somewhat embarrassed to admit that Slayer trailed in last place for me. Part of the problem was that they were too fucking scary. Slayer albums were ugly, satanic-looking things that looked like they were cobbled together in blood and flesh by some addled madman. I preferred the austere, somewhat boneheaded symbolism of Metallica’s album covers. Lady Justice is crumbling because the government is all messed up, you know?

As a teenager, I was into skulls and death and shit, but I needed that stuff to be relatively palatable – like the cartoony Eddie from Iron Maiden. My favorite T-shirt was Anthrax, with Judge Dredd on the front, embellished by Sharpie autographs of the entire band.

Still, Slayer was sewn into the culture like a back patch on a battle vest. You couldn’t escape them. So, despite the fact that I only had one bootleg tape (b/w Dead Kennedys) provided by a skater buddy, I still found myself learning their songs from the pages of Guitar World. That hammery riff in “Angel of Death” will always be quintessential thrash to me.

As I grew older, I came to realize that not digging on Slayer wasn’t just a matter of taste. It was a character flaw. I credit the former editor of Big Brother magazine David Carnie with providing me with the inspiration I needed to go back to the Slayer well. Carnie is a hell of a writer and his unironic all-caps love of Slayer and all things Hessian in the pages of that skateboarding magazine helped lead me back down the dark path. 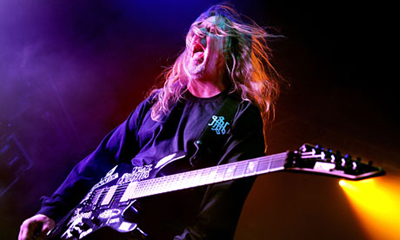 Of course, I write this because Jeff Hanneman, the 49-year-old founding member of Slayer, died today of liver failure. And though he didn’t enjoy quite as much limelight as other Slayer band members, I will still remember the first and only time I saw him perform.

The show was a package tour called Clash of the Titans. Anthrax, Megadeth and Slayer shared the bill with Alice in Chains in support. There were chairs set up on the floor of the Miami Arena, but they stopped well short of the stage, purposefully leaving room for a mosh pit. Me and my sister, both somewhat wimpy, kept to the seats closest to the stage – not daring to venture into the scrum. The crowd barely registered the presence of Alice in Chains. Anthrax and Megadeth inspired plenty of pushing and shoving. But Slayer. Dear fucking God, did Slayer make the kids go crazy. The bodies swirled and surged, elbows flew and hair whipped. On every face was an evil grin. Even if you don’t enjoy being caught in a mosh, it is hard not to admire the confluence of teen stupidity, unchecked aggression and scumbag community that allows such a strange ritual to occur.

It was the last date of the tour, so throughout the show the bands had been playing pranks on each other – storming the stage with squirt-guns and whatnot. It was all in good fun. When the time came for Slayer to play “Angel of Death,” the other bands conspired to lower a giant fish on an oversized hook down from the rafters, but the joke backfired – the prop just sat there in the blood red light. And the band remained stooped and undistracted. I saw Jeff Hanneman there onstage, his blonde hair hanging over his shoulders, his head banging as his hands hammered out the one true riff. At the time I thought that Slayer was humorless, unable to smirk at all the self-seriousness of metal. But I was dead wrong. Those dudes were at work and they were killing it. You only had to look at that swirling mass of puberty on the floor to know that Slayer and the particular kind of metal they made were no fucking joke.

Pretension +1 is a weekly column about the intersections of life, culture and videogames (and music). Follow Gus Mastrapa on Twitter @Triphibian.