I am very fortunate to be on Chris Hecker’s mailing list. Whenever the brilliant designer has a new demo or beta test for his forthcoming game SpyParty, I get a friendly invite to download the game and take part. The last time I got one of these invites was way back in May and, though I’m very excited by the prospect of his novel, asymmetrical game “about subtle behavior,” I still haven’t downloaded the new version of the game.

This is a failing on my part.

I haven’t played SpyParty because the idea of learning a new game scares me off. I am lazy and would rather pick up a known entity then delve into something completely alien.

Since the SpyParty invite arrived in my inbox, I have played Diablo III, Spec Ops: The Line and Pokemon Conquest to completion. The learning curves for all three games were profoundly gentle. That’s because all three exist in genres I am very familiar with. I know how dungeon crawlers, shooters and turn-based strategy games work. When a new game within these genres is released, I know, to a very narrow degree, what I am going to get. Moving from one game to another is like climbing into a car. You know, at least in a general sense, where the steering wheel, gear shift, gas and brakes are going to be.

Trying to learn Dwarf Fortress is like climbing into the cockpit of a 747.

SpyParty is like a recumbent bike. Sure, there are pedals, but you’ve got really got to spend some time sitting in the thing to get your balance and steer properly. You’re probably going to fall off and you might even skin your knee. Trying to learn Dwarf Fortress is like climbing into the cockpit of a 747. That’s why there’s finally a paper manual.

Some people like learning new systems more than others. My college roommate, Dave, loved installing new operating systems onto his computer. He fooled around with every flavor of Linux he could get his hands on. I don’t remember him doing much else with his computer other than futzing with the software that made it run. He never really played games. He just installed, tweaked and un-installed over and over again. Dave wound up making telephone networks for a living, so thank God there are people like him who enjoy that kind of work.

I am curious about the way things work, but I’d rather not have to learn about how my faucets, computers and cars work because they’re not working. I want that shit to work all the time. And if it doesn’t work I want somebody to come fix it. Afterwards, when the faucet has stopped leaking, when DayZ is installed and running and when the car starts every morning, we can have a beer and talk about the amazing intricacies of all these systems. But first let’s just get that shit working.

I write this not because I take any issue with SpyParty. The game is fun and fascinating. I’m sure that someday soon, when I get the motivation, I will dive into this new and interesting game and come to love its novel intricacies. No, I’m sharing these feelings because I think they say something about what we want from games. We frequently complain that so many games are the same 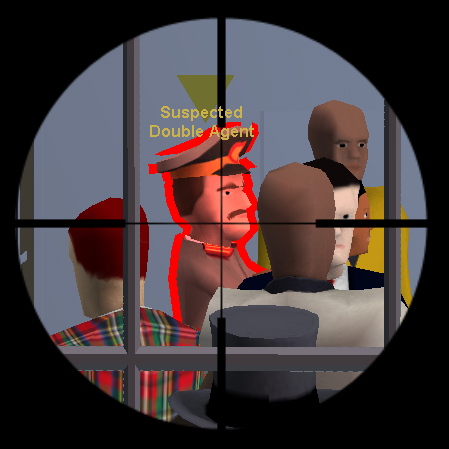 grey-green shooters or elf-filled role-playing games, but I don’t think I could handle an endless flood of totally novel, completely left-field games. The amount of recalibrating and learning required would be exhausting. One Katamari Damacy every five years might be enough. The fact that we all clamored for a sequel to Katamari Damacy says a lot. After adding the language of that game to our vocabulary we wanted more of the same, thank you.

This notion doesn’t just apply to the mechanics of games. The themes of most games stick to known quantities like science fiction and fantasy because those worlds are known to us. We understand that the ugly orcs are villains and that the guys with the pointy hats are the ones who can do magic. There is great utility to this kind of  familiarity. When everyone speaks the same language you can use shorthand, you can get mileage out of revisionism and the tweaking of tropes.

I am glad there are people like Chris Hecker to shake us from our stupor and remind us that there can be new and exciting ways to play games. I’m not going to lie to you, though. I’m also glad that there are people out there making the same game over and over again. I feel exhausted trying to imagine a world where every game is an utterly new experience. Sometimes (maybe more often than I want to admit) I just want to climb into the driver’s seat, turn the key, step on the gas and drive.

I was a Teenage Sexist