For me, vacations are all about the journey. Going and sitting on a beach is fun for a time, but I would much rather spend my leisure time and money going somewhere, not being somewhere. This might be why I actually, strangely, kind of enjoy long, intercontinental flights. I like looking out the window (when I am lucky enough to get a window seat) or at the display in the headrest in front of me and realizing I am smack-bang in the middle of that ocean which, when you look at a map back at your home, is just a blue void you never really think about between you and some land you never really consider being real beyond television and photographs. But now you are actually there, right above it.

I particularly enjoy the headrest displays that show you where it is day and where it is night. The maps that show you moving around the world and flying through “Last Night” for a second time or making “Today” thirty hours long as your surf the dawn west like a wave. There’s just something about the notion that everywhere in the world is existing simultaneously that really hits home. Maybe stepping back 40,000 feet gives you some perspective on the planet. 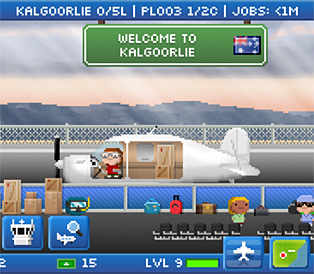 NimbleBit’s Pocket Planes shares many of the same problematic designs as did Tiny Tower, which I had a weird relationship with. I knew what it was trying to do. I knew how it wanted me to pay money so that I wouldn’t have to wait until I could press the button again. But, in a weird way, I enjoyed the waiting, and I enjoyed the maintenance. I gave the game a positive score when I reviewed it for Paste even while being honestly blunt about the game’s almost unethical hold on me. I played it for hours upon hours, and I justified it with, “Well, I never spent any money,” as though that discredited the game’s hold on me.

But there is also a lot more to simply do in Pocket Planes than in Tiny Tower. Every time you choose to load up a plane with cargo and passengers, you have to think about where those destinations are in relation to each other. If you are at the airport in Alice Springs, you don’t want to load up passengers for both Perth and Melbourne – you will probably spend more money on fuel than you will make.

There is something nicely… Earthian, perhaps, about Pocket Planes, about having to think about how all the different places in the world are spatially connected. I wake up in the morning and all my planes are sitting at whichever airports around Australia or Southeast Asia I sent them to the previous night. Up and down the Australian east coast it is daytime. Further west, in Alice Springs, the dawn is still just approaching and the sky is tinted red as a plane takes off towards Perth. Even further West, towards Bangkok, it is still dark, the stars are still out and my little bitizen passengers are asleep in their seats.

When I fly from Australia to America, I love getting off the plane about an hour before I got on it twenty hours earlier, and realizing (because I haven’t slept for any of the intervening time) that back in Australia, it is already tomorrow and my family and friends are getting on with their tomorrow afternoon right now. In Pocket Planes, with its real (and really slow) temporality, I can flick a finger across the map, tap a different airport, and see that for myself. Or I can watch a plane fly back into the night that they just left.

But even as Pocket Planes makes me feel more connected to the world, it makes me care less and less about its people. In Tiny Tower, I got to know my bitizen tenants. I tried to make them happy. I dressed them up and made sure they were working in their dream job. In Pocket Planes, they are just objects to ship around, only differentiated from the cargo crates by the fact that they require my planes to have seats. I have left little men and women stranded at airports for hours, days even, because a different passenger was offering more money to go in the other direction.

Which, too, is kind of like being on a plane. You don’t care for the people around you. They are just snoring objects and shuffling objects and kicking-the-back-of-your-seat objects. Objects you see in the line at immigration and groggily kind of remember seeing in line to board twenty hours earlier. In Pocket Planes, like in traveling, I feel less attached to the people around me even as I feel more attached to the world as a continuous, singular place.