Note: This is a review of the non-VR version of Thumper.

Good rhythm games can be played with your eyes closed. That might not be the ideal way to play them, but it should be possible. Once you’ve memorized the pattern of button presses, you should be able to drift into a flow state where the rhythm of the beat takes over your muscles, the same way you subconsciously tap your feet or sway your head when you’re listening to your favorite song.

Thumper is not a game you can play with your eyes closed. You could probably fumble your way through a couple of sections, but your eyes need to be working just as hard as your ears.

Careening through space as an armored beetle – the insect, not the car – you can’t afford to blink, because a split second of inattention will spell your doom. Beat markers fly down the rhythm highway at breakneck speeds, and if you’re not thinking three moves ahead, you’re already dead.

At first glance, Thumper bears a strong resemblance to games like Amplitude; you’re hitting buttons to the beat to simulate playing music. Thumper, though, is a rhythm game, not a music game, and this is an important distinction to make.

In Amplitude, you mash out riffs for individual instruments, flowing from one to the next to piece together an entire song. Even if it’s a song you’ve never heard before, there’s a clear rhythmic structure tying all the riffs together. Verses lead into choruses, time signatures rarely change, drums hold a steady tempo. This structure is what lets you find your groove and feel the rhythm at a deep, subconscious level.

Thumper has no such structure. While a few riffs have a tentative melody to them, most don’t. Beats feel dissonant and disconnected, strung together with no sense of flow. Levels lack a unifying tone, with each riff ignorant to the rhythm of the one that came before. At times, this makes Thumper sound like the world’s worst free jazz band clanging away on pots and pans, each member utterly oblivious to what the others are playing.

This culminates in moments of indecipherable chaos, where beats follow no discernible rhythm and markers fly at you out of nowhere. There are sound cues attached to the markers as they’re laid down before you, but too often they’re drowned out by the overbearing backing tracks or the beats you’re currently playing.

The only way to get through these sections is by relying on visual cues. I often found myself having to translate incoming beat markers and obstacles into rhythms in my head, guessing at what they should sound like and hoping for the best. In one particularly egregious example near the end of level 3, the audio was so overbearing that it was effectively just noise, and I ended up having to tune it out completely and play by sight alone. At that point, I might as well have been playing with the sound off.

The worst thing about all this is, there are parts of Thumper I absolutely love. From the THX-inspired title screen to the slick chrome sheen of your space beetle, the game is a visual treat.

Levels plunge through prismatic holes in the fabric of space and surf across the undersides of enormous metallic insects, their legs enclosing you in a tunnel of serrated death. Enormous geometric constructs that wouldn’t look out of place on a Pink Floyd album cover manifest in 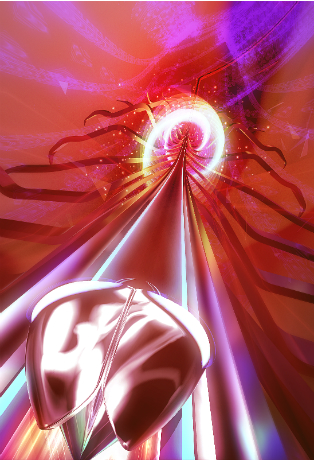 front of you, each a boss that must be slain using the power of rhythm. A flaming human head fills the screen, screaming in silence as you shoot concentrated beats into its cavernous maw.

There are moments of rhythmic joy buried in all the noise, too. When Thumper leans into its musical potential, chaining together consonant rhythms to form pseudo verses and choruses, it can be hypnotic. The beat thrums through your bones, your whole body pumping in sync with the pulse of the primal rhythm – Thump thump turn, thump thump turn.

Sound and touch become one and the same, synaesthesia provoking an almost out-of-body experience as the beat takes you over. Orchestral swells announce the arrival of another boss, imbuing the moments before the battle with equal parts doom and grandeur. It’s just a shame the battles themselves never live up to their promise.

I really wanted to like Thumper. It’s slick and stylish, and the concept of rhythmic fighting holds a lot of promise. But Thumper is a song without a melody, a rhythm in need of a soul. Beneath its shiny shell, it’s just a whole lot of noise.

Thumper is available for PC on Steam and for PS4 on PSN.

Our Conversation About Portal Knights: A Review Story
Previous Post

Bleach: The Sense of a Nonending