Plenty of established publishers have thrown lazy, overpriced ports of their games onto the App Store for a quick buck, but few have demolished and rebuilt their safe franchises like TAITO Corporation has. Groove Coaster, like many of TAITO’s iOS offerings, is about distorting something simple into something complex.

It’s a simple tap-with-the-beat game, but while most rhythm games focus on a symbiosis between the audio and the visuals, Groove Coaster’s songs and visuals are almost antagonistic in their relationship. The player’s avatar flies along a thin, single-pixel rail, and the player must tap with the beats that appear along the way, receiving more points the more in time they are. 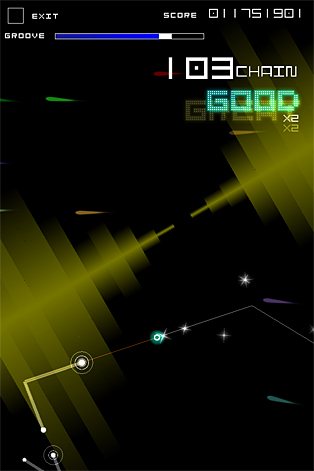 The illusion comes from the thinness of the line. It looks like a 2D rail, but, in a Fez-like deception, is actually 3D, stretching away along axes you don’t suspect even exist. The next beat you have to touch might look like it is just ahead of you, but then the camera twists around and shows that what looked like a straight rail in one direction actually turned a corner into a third dimension you previously couldn’t see, and the beat is actually twice as far away.

This is explored further with the “ad-lib” bonus points given for finding hidden beats. Some beats don’t appear on the rail, but if it feels like there should be a beat in a beatless space, tap and there probably will be. It is a gamble, though, as if there is no beat you might end up being classified as having hit the following beat out of rhythm and losing your multiplier.

The deceptiveness of the visuals, though, does not mean they are disposable. Like many of TAITO’s iOS games, the unique style of wiry frames and sprites and throbbing, flashing colors comes together in an incredible spectacle.

The music is half-decent, too, with contemporary Japanese pop and electro that wouldn’t sound out of place on a Jet Set Radio game. While plenty of songs are blocked away behind $0.99 microtransactions, more than enough songs come with the original game for you to never have to put down any more money.

Groove Coaster is exploratory. Tapping and swiping along with the songs, building them up even as you reveal them, feels less like doing what you are told and more like an act of discovery. The song is hidden somewhere beneath the visuals, and you tap the screen rhythmically to chip away at the stone, trying to discover it.

Dad, I Sacrificed The Babysitter

The Art of War Reviewed