I can’t say when I’ll quit Pocket Planes, but I know it will happen. The last time I took a hit of a NimbleBit game I didn’t get all that buzzed. Or I did, but I realized quickly that it was a cheap high. Tiny Tower felt like the worst kind of busywork to me. Every minute or so, another store would run out of stock. I felt like an assistant manager with the laziest, most unmotivated staff in the world. The only decisions I made in that game were around staffing – when it was time to hire I’d assign the best person for the job. Every so often I’d reshuffle my employees to assure that everybody was working their dream job. But no such accommodations were made for me. My work as landlord of a growing skyscraper felt rote and colorless. I was like George Jetson pushing a big red button all day. So ten stories or so in I erased the game and never looked back.

I am not sure what kind of personality it takes to enjoy micromanaging non-people like Sims or the little gape-mouthed folks in Tiny Tower.

Some people like that kind of mundane power. It has been said that World of Warcraft raid leadership is something akin to middle management. You need a special kind of personality to enjoy telling people what to do. I am not sure what kind of personality it takes to enjoy micromanaging non-people like Sims or the little gape-mouthed folks in Tiny Tower. I remember rapidly losing my patience with The Sims because I felt like I was continually reminding my Sims to do remedial tasks like collecting the mail. After the third or fourth time having to remind those idiots to flush the goddamn toilet I gave up. Let the morons cry in the bathroom all day.

When I’m playing Pocket Planes I often wish I could just tell the two pilots of my only Class 2 planes to just shuttle back and forth between Los Angeles and Mexico City, but they’re too dumb to take that kind of direction. I have to tell them what to load on their planes and where to fly. They’ll never learn.

Don’t get me wrong. I love telling stupid computers what to do. When I was a kid my favorite toy was Big Trak – a wicked tank that you could program to tool around your house, shoot lasers and (if you had the extra trailer hitch) dump your stuffed E.T. doll at your parents’ feet. I spent entire afternoons coming up with  instructions for my little robot minion. A good part of that time was spent methodically punching the instructions into the keypad on the back of the vehicle. I’m pretty sure my parents approved because playing with this minature Mako was an exercise in procedural thinking. Back then, I was being groomed for mathematics or engineering. Soon after, I’d mastered ins and outs of Basic programming from magazines. Before I learned that a poorly-typed line of code could botch a whole computer program, however, I discovered that one bad button press on Big Trak could throw off the whole routine. Big Trak, not any computer manual, taught me universal truth of GIGO. Garbage in, garbage out. 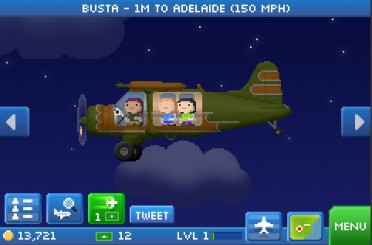 Of course, there’s nothing worse then telling your computer precisely what you’d like it to do only to have the thing shit the bed with your instructions. That’s why everybody is so fucking fed up with Kinect. That shit never really worked right and when it did manage to understand your voice commands or read your flailing arms, that was usually after minutes of exasperated flailing and barked orders. George Jetson’s button-pushing job at Spacely Sprockets might have been soul-crushing, but at least his button worked.

When measuring just how much my soul has been crinkled and compressed by Pocket Planes, I notice that I do find a simple satisfaction in air traffic control. It helps that I get to chose how my network of airports expands. I’m choosing which new aircraft to commission and I’m deciding what goods and passengers to ship where and what route to take. If I want to stop and add new cargo or customers every time I make a delivery I can chose to micromanage in that way, or I can just  sketch out the flight path all the way across South America and let my planes fly half-empty while I sleep or have a life.

Despite all these interesting decisions, Pocket Planes still makes me feel like a piece of the machinery – like a tool. We are surrounded by amazing new technologies, but all I really want sometimes is a button that pushes itself.

Gamatria: A Mystical Deconstruction of Fez

Rookie of the Year: The Lost Kinkos of Chiang Mai