According to Steam I’ve logged over 80 hours playing The Binding of Isaac. I’m head over heels in love with this game. I can’t stop playing it. I don’t want to stop playing it. And I’m here to tell you why you should play The Binding of Isaac if you haven’t already, come back to its dark clutches if you have strayed from the path and then, once you’ve drunk from the well, put serious thought into nominating it game of the year. 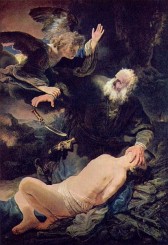 There are myriad reasons why I adore this game, so let’s start from the beginning . The Binding of Isaac has a bit to do with The Bible. I recommended the game to a churchy friend and she was annoyed at the game’s portrayal of “crazy Christians” so I know it’s onto something. The game’s title refers an Old Testament tale of Abraham being tested by God. Back then, God was a jealous, jerky deity so he commanded Abraham to sacrifice his favorite son, Isaac. Abraham was distraught, but followed God’s wishes, marching his son up a mountain, tying him up and placing him on an altar to be bled like a goat. An angel stayed Abraham’s hand at the last minute. God was satisfied that he had the prophet in his pocket. And Abraham learned what? That his boss has a sick sense of humor?

Anyway, the game in question nods towards the Sunday school lesson. Here Isaac is a happy little boy whose crazed Christian mom hears the voice of God, picks up a kitchen knife and aims to cut the poor kid to pieces. Just before Mom kicks down the bedroom door, Isaac discovers a hatch to the basement in the floor and his descent begins.

The game itself is a clever blend of The Legend of Zelda and Nethack. The Binding of Isaac is like the Nintendo classic in that poor Isaac moves from room to room in a dungeon, finding himself locked in each chamber with enemies that he must defeat. But Isaac isn’t armed with a sword or even a boomerang. He starts the game naked, with salty tears streaming down his face. Isaac combats buzzing flies and slithering worms by crying at them. If The Binding of Isaac were merely a Zelda clone with emo trappings, we wouldn’t be having this discussion. It’s the game’s brilliant integration of rogue-like randomness and difficulty that has kept me playing. 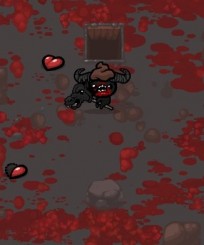 You start The Binding of Isaac with nothing. As you scrape through the The Basement, The Caves and The Depths you slowly acquire new powers, weapons and tools to help you survive. But should you die you start from scratch – naked and alone. That’s not to say that The Binding of Isaac doesn’t have a kind of in-game progress. As you reach milestones, new power-ups enter the pool of randomly discovered items. And that’s the real treasure that you carry from game to game – knowledge. Over hours and hours of playing The Binding of Isaac, I’ve come to learn how every item works. Some are better than others. Some straight-up stink. Through practice, I’ve learned which stuff to pick up and which to ignore. I’ve developed strategies for saving up pennies just in case the stuff I want pops up in one of the item shops. And I’ve learned to game the system, farming for health, money and buffs.

Perhaps my favorite thing about The Binding of Isaac is the way that all the items continue, in subtle ways, to tell the story. Power-ups like The Belt and The Spoon increase Isaac’s speed. And when he acquires them he changes  physically. The Spoon raises welts all over Isaac’s body as if he’s been battered with the kitchen utensil. The Wire Coat Hanger sticks, bloody, out of his head. Play long enough and Isaac becomes unrecognizable – fattened by lard, blackened by deals with the devil and further mutated by pills he’s gobbled.

To me the true revelation of The Binding of Isaac is how wholly it merges theme and gameplay.

On paper Isaac’s final trial is a battle with Mom, but defeating her is only the beginning. New characters unlock, new items find their way into the dungeon and new, tougher bosses find toeholds in the depths. That’s what I’ve been doing for the past three months – methodically working my way through Isaac’s further trials, discovering new tactics and taking on new enemies. I feel like I’m close. I’ve defeated Mom nine times. Only Sheol – the beast – stands between me and the game’s true ending.

Now, I don’t expect you to become as obsessed with the game as I have. I’ve noticed that a lot of my friends on Steam gave up after playing the game for a hour or two. I feel like that’s not quite enough to really get at what makes this game so great. Spend some time with The Binding of Isaac and its dark secrets start to reveal themselves. To me the true revelation of The Binding of Isaac is how wholly it merges theme and gameplay. The plot and mechanics are interwoven with such imagination and intelligence that I’m convinced that Edmund McMillen is some kind of mad, broken genius.

The dark subject matter of The Binding of Isaac seems to be held at arm’s length by the cartoon style. But there’s an intimacy with the finer points of pain that come out when you look at the game holistically – it’s like a brain dump of Internet memes, Satanic imagery and the tools of parental abuse. In this game McMillen displays an intimate understanding of juvenile anxiety, shame and fear. The word “visceral” gets tossed around by people who write about games far too often. But if there’s one game that’s elbow deep in piss, blood, shit and guts, it’s this one.

Pretension +1 is a weekly column about the culture of videogames. It is usually much more negative than this.

Edmund McMillen, Nethack, The Binding of Isaac, The Legend of Zelda, World of Warcraft