I consider myself lucky. The Internet has been mean to me, but I’ve come away relatively unscathed. Though it isn’t the worst instance of online rudeness I have experienced, I’ll always remember the night a World of Warcraft player took a moment to call me names in the Terrokar Forest. I hadn’t done anything to the person. My party was questing along the base of a rocky hill, collecting pine cones and fighting feral wolves. The jerk ran past us, then stopped, turned and called us “noobs” before continuing to go about his business.

The insult didn’t sting. What hurt was that another human would take a moment out of their life – burn calories and expend brain power – to make somebody else feel bad. My initial impulse was to come back. The dark parts of my mind are capable of vomiting up insults so grotesque and ugly that they’d make Satan blush. The next place my brain went was to reduce this person to a stereotype – an angry basement troll with an inverted penis and infinite impotent rage to share with the world. The truth is scarier. My persecutor was just like me – an average human being who every so often commits acts of banal evil.

The jerk ran past us, then stopped, turned and called us “noobs” before continuing to go about his business.

Games facilitate this kind of jerkiness, but they don’t have to. Last night, I downloaded a pair of games for my iPad that eschew chat for simpler forms of communication. Lost Cities (based on the card game by Reiner Knizia) uses simple emoticons for communication. You can wink or cry or send hearts toward your opponent. You’d be surprised how much ground you can cover with a shorthand like this. The best part is that there’s no way you can call or get called a nasty name. The other game, Zookeeper Battle, lets you choose from a handful of greetings and signoffs before and after the match. They, too, are all cordial. The fact that you have to say something to your opponent feels like codified sportsmanship. There’s mandatory politeness wired right into the game. At the risk of flogging stereotypes, it feels like a very Japanese gesture.

Back in the wild, woolly days of Ultima Online it was not uncommon to encounter Japanese players on American servers. You’d see their Kanji appear over their heads when they spoke, but unless you were bilingual, there was no way to communicate with them. For Final Fantasy XI, Square Enix came up with an admirable and ingenious work-around for the inevitable culture clash that would occur when Western and Eastern gamers met on shared servers. They created a pidgin language. Specifically, a shared vocabulary of words that players could string together to create universally understandable (though frequently hilarious) messages.

Clearly, communication is vital to many online games, but the solutions we have so far are inelegant. I was appalled when making the shift from Ultima Online to Everquest. I loved the way that speech hovered around Ultima characters like speech bubbles then faded into nothingness. The chat window of Everquest (and every other MMO since) feels detached and impersonal. It pulls you out of the game and (if you have the misfortune to be paying attention to a General channel) it distracts you with the unfortunate, frequently idiotic banter of the rest of the people on your server. 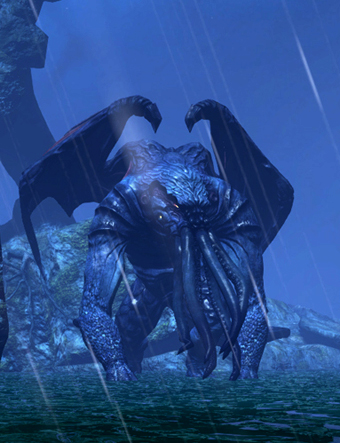 I am equally unfond of voice chat – a tool that has become the default means of game communication. I’ve grown accustomed to talking to friends on my Xbox 360, but like all people with aversion to being called names in a stoned, Southern drawl, I never listen to the open channel. After five or six years of playing World of Warcraft sans voice, I recently gave in so that my five-man group could more efficiently roll through heroic dungeons. I admit that I enjoy talking to Unwinnable’s fearless leader, Stu Horvath, during our late-night sessions of The Secret World, but I still feel like voice has a deleterious effect on MMO communication.

One evening we found ourselves in the game’s first dungeon, Polaris. Games writer Dennis Scimeca joined us on voice. We filled out our party with two strangers. The problem here was one of too many divergent ways to communicate. The Unwinnable crew was sequestered in our own chat room. There’s a good chance that the other two parties were embroiled in their own sidebars. In cases like this, the shared chat window will often remain silent, with everyone fighting mutely through the entire encounter. If you’ve ever done a dungeon crawl with a pick-up group, you’ll know that the experience has none of the mystery or emotion of playing Journey with another traveler. It’s like being in traffic.

Our group broke the silence when the dungeon’s bosses starting giving us trouble. We shared tips and strategies, but it wasn’t enough. The final boss – a nasty Chthulu lookalike – killed us over and over. Stu, Dennis and I cursed, debated and griped with every botched attempt, but the text chat log became more and more silent with every failure. Eventually, our teammates, people we hardly knew and barely spoke to, simply dropped out of the party. They quit without a word or apology, which is rude, but not half as bad as leaving us with a parting insult.

Through the Lens of Gaming