The situation on the couch is tense. The kid and I are struggling through one of the most knuckle-breaking levels in Rayman Origins and there is no room for error. Beating this sucker will bring us to the end of the game, but so far, we’ve lost again, and again, and again, and again, and this time, it’s my fault. I jumped too early and got in the way and killed us. Daddy fucked up.

The boy makes an angry sound that’s deep and big. It’s a kind of roar that starts between his clenched jaws, and gets louder the harder I laugh at him. I’m a little more nonchalant. “We can just try again.”

I would tell him, look, the giant’s coming for your town, watch out, but would he listen?

“I’m sick of this!” he growls, but then of course we hit the button and try again.

My kid and I play a lot of videogames together. In fact, we always play videogames together, at least half an hour every night, after dinner. Whether we’re hunched over the computer or slouched in front of the TV, all of his game time is spent with me – teaching him, supporting him or yelling at him.

That’s me playing Trine 2 with him the other night. I know I should be patient when we play together and most of the time, I am. I still remember the first game we played together, the splendorific Machinarium. This was two years ago, when he was finally old enough to play videogames (his mom, my wife, the only non-gamer in the house, didn’t want him to play until he was at least four, because, I don’t know, addiction or whatever?). We huddled in front of the PC in my office, and I taught him how it worked. He learned to use a computer mouse dropping plastic pails on a robot’s head. When I almost dropped the robot protagonist in a furnace, he screamed in terror; when we fooled around with the giant clock and carillon in the center of the game, he giggled in delight. We beat the game together, more or less, and I still remember the moment of joy when we solved a puzzle at the exact same time: “We need to use the toilet paper!” He was hooked on the medium, and I was the one who led him there. 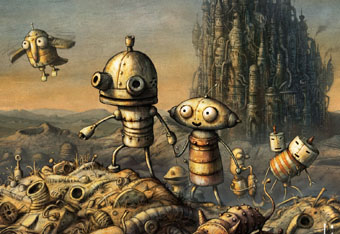 There are bad times, too. When we play together, I’m not just his dad/coach/spirit guide; I’m also the other player who’s trying to win the game. That’s when things get frustrating. In Horde, he kept missing opportunities by getting sidetracked chasing princesses – and I would tell him, look, the giant’s coming for your town, watch out, but would he listen? It’s frustrating to watch someone else make a mistake and the black-and-white failure in games leaves no room for sympathy. I don’t care if you’re Mother Teresa playing with the Little Match Girl: watching someone make the same mistake 10 times would drive anyone insane.

Co-op gameplay is both the best and the worst. At our worst, we’re like squabbling kids, blaming each other for every mistake. We lasted 10 minutes with New Super Mario Bros. Wii  before I had to take it out back and bury it in the ground. To be fair, Mitch Krpata warned me, but I didn’t listen and I paid. Who would make a co-op game where it’s easy to bump into each other, to undermine each other and to pull each other into danger and then to “bubble” yourself and float around making a nuisance of yourself? The game is so toxic, I think the designers should go on trial at the UN.

At times like that, I pick up the bad habits of an older brother – a poisonous mix of superior knowledge and a monopoly on the use of “noogie justice.” I realize I should be the adult. So, maybe I shouldn’t play games with him. Maybe I should just sit on the couch and watch, or even go out in the other room, read a nice book and act like I don’t understand what he’s playing on that thing – the same way my parents dealt with me and my ColecoVision.

I may beat him on coordination, looks and pop culture references, but game after game, we complement each other well.

When we find a game that doesn’t make us tear each other’s throats out, we just have too much fun. I get to admire my kid’s skills, some of which I never get to see in our daily life. He’s observant: he’s always the one who catches the patterns in a boss fight, while I just wade in and slog. He’s tenacious: when we’re up against an impossible platforming level, I’m ready to give up on the fifth or sixth try; he never gives up, until bedtime. I may beat him on coordination, looks and pop culture references, but game after game, we complement each other well.

The greatest co-op game we’ve ever played – so far – is Portal 2. The game has an entire set of levels that are designed for two players and they work well even if you bring wildly different levels of skill: one player may rush ahead and figure out the puzzles, but it takes both of you to execute the solution. When one of us is threading through an obstacle course while the other is opening gates, shooting portals and warning, “Watch out for the fire!”, we get to work together in a way that we rarely can in the real world.

We’re not just two guys on a couch, and we’re even more than family: we’re a team. 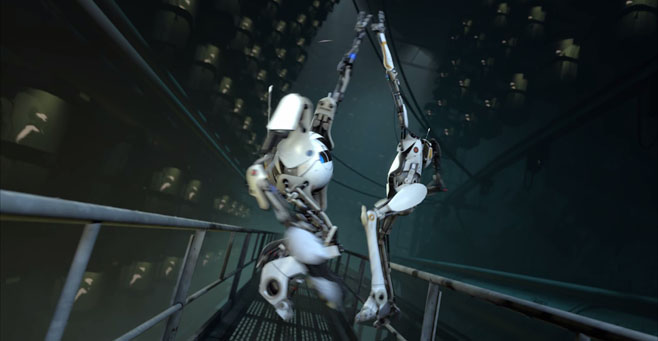