I love grappling hooks. Few other instruments so perfectly embody the pleasures of gameplay. They are easy to understand but difficult to master; they allow for a vast array of precise movement but not without challenge. They have very specific purposes but also allow a great deal of improvisation. Grappling hooks are the essence of what videogames do, distilled down and molded into a chain and a hook. 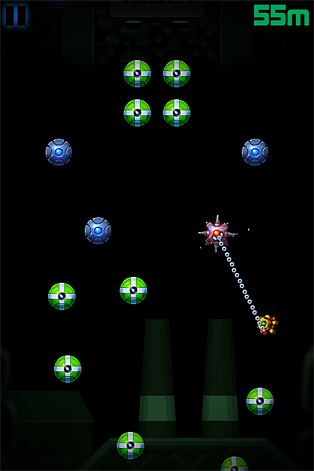 The App Store has more than a few decent grappling hook offerings. Most are auto-running games, where pressing the button has the character shoot the grappling hook and swing until they let go. It’s still fun, but the computer does most of the work; the grappling hook is only really used to pick up speed. You use the grappling hook, but that extra challenge of mastering it, of improvising with it, is gone.

Adam Saltsman’s Gravity Hook HD, on the other hand, gets away from the auto-run formula (ironically, perhaps, for a developer who birthed the auto-run genre with Canabalt) by not being about getting as far as possible, but as high as possible. You character swings up and up and up until that inevitable miss causes your character to plummet down beyond the bottom of the screen.

Purists might note that the gravity hook isn’t a grappling hook in the strictest, traditional sense. It clutches onto its mark and retracts to pull the user in closer, but the trick is the closer you are to the clutched object, the more power with which it retracts. If you clasp onto something too far away, the gravity hook won’t have the power to pull you up, leaving you to instead fall to your death. Catch something close and you are thrust past it into the air with extra momentum.

To climb in Gravity Hook HD is to use the gravity hook’s unique ability to build up momentum by grabbing one floating orb after the other. Just as the gravity hook reels you right past one orb, you must perfectly time when you catch onto the next, so your leftover forward momentum lends extra power to the hook’s ability and keeps you moving. It’s difficult and at times frustrating, but it’s also exhilarating. Hooks can’t just be tossed carelessly; each throw has to be precise and considered without ever stopping long enough to lose your momentum.

Progression is made trickier still as new orbs are introduced. Explosive proximity mines that activate while grappled force you to release them before you pass over them. Other mines will blow up the moment you hit them, whether you are grappling them or not. Other orbs are solid and unable to be passed off and fall out of the sky if grappled for more than a second. Yet, even when the screen is littered with orbs, the simple interface makes it easy and intuitive to grasp the orb you intended. Rarely can you blame the game for your failings.

Climbing becomes a delicate acrobatic performance as you try to swing around mines and bounce off walls for that extra rhythm. Often, you’ll feel cheated as you fall to your death at a challenge that seems impossible. But as you improve, you’ll find ways to improvise in different situations; your character will somersault in free-flight around mines before bouncing off a wall, grappling and swinging himself over two more. You’ll do things not only completely insane, but completely deliberate.

1931: Scheherazade at the Library of Pergamum