I was in a bad place in Minneapolis. We moved there so my wife could go to school , dropping everything, leaving friends, family and jobs behind. For the first year, I didn’t have many friends. I missed California mightily and found myself living on the Internet – latching onto places like NeoGAF for fellowship. That’s when the drinking started getting a little out of control. I’d drink to blot out my loneliness, insecurity, fear and boredom. Drinking was something to do. Smoking (which I was struggling to quit) was a good accompaniment. I realized that things needed to change when I found myself drunk, walking to the gas station in the freezing cold, just so I could buy another pack of Marlboro Lights.

I needed a hobby and an outlet. I needed friends.

We left a ton of great people in Los Angeles – a circle of friends so wide that you couldn’t go to a record store or bar without running into one of them. They made that big city feel small in the best possible way. Even though I’ve spent most of my life moving (dad was a civil engineer, not military) it felt strange to be in a new place. That’s because my time in Los Angeles was the longest I’d ever stayed in one place. I thought I had found home. Now I had a new, strange home that I just couldn’t get a handle on.

One Thursday night I wandered into The Source, a comic shop blocks from my wife’s campus. The place felt immediately familiar – racks of pulp, a room full of graphic novels, gaudy statues of costumed heroes collecting thin veneers of dust. In the back, past what I would learn was an exceptional selection 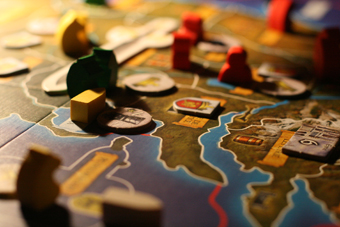 of board games, were tables where nerds gathered to play collectible card games and pencil and paper RPGs. I hadn’t touched a game like this since Pokemon, but I was in full-on search mode, hoping for some kind of social lifeboat. That’s when I saw tall, shaggy-haired Rob shuffling a deck of cards based on George R.R. Martin’s A Game of Thrones. I didn’t realize that I was in the backyard of Fantasy Flight Games, the proprietor of many super geeky games. Neither did I realize that I was about to befriend a group of geeks who had played the A Game of Thrones CCG competitively. And, perhaps most importantly, I didn’t realize that I was meeting my new circle of friends, a group of like-minded dorks who I’d count as good friends long after picking up stakes and leaving Minneapolis.

But I’d just finished reading those books and was relieved to find someone, anyone, to talk to about them.

Rob was bright and friendly. He worked at the phone company and was married to a woman who was also studying to be a veterinarian. He shuffled out a deck of starter cards and taught me how to play the complex card game. It was a lot to wrap my head around, but I was happy for the challenge. I’d spent too much time numbing myself. It felt good to be around smart people again. I started coming back on Thursdays and met my new friends – Mike, Aaron, Geoff, Tim, Andy. These guys would become my social life for the next three years. And, eventually, I’d leave them like I have left everyone and everyplace else.

Now I’m in Apple Valley, a place hours from Los Angeles and far outside my old circle of Southern California friends. It wasn’t long ago that I found myself in a familiar place – feeling friendless and disconnected. I drove to downtown Victorville, a strip of abandoned storefronts that look precisely what you’d expect a Route 66 ghost town to look like. I cruised past the storefront for The Dragon’s Den, a hobby shop I’d found in the yellow pages – and found that the place was boarded up. It would be harder here, in the high desert, where geeks feel like an endangered species. But I’d eventually find my people here. There’s no way I could survive without them.

Pretension +1 is a weekly column about games and the way they color and inform our lives. Follow Gus Mastrapa on Twitter: @Triphibian.

No One’s Gonna Stop Me Now

Things are Getting a Bit Unreal