I grew up watching random television shows, each of which I now have to assume were written halfheartedly and without much thought. A far cry from today’s offerings – instead of Friday Night Lights, Mad Men and Parenthood, I watched Saved By the Bell, Mork and Mindy and Get Smart. As a kid who enjoyed the arts more than most, I found myself fully invested in these fictional characters, identifying with Screech’s unwise obsession with Lisa Turtle, Mork’s struggle to fit in with those around him and Maxwell Smart’s bumbling attempts to save face in light of his own personal missteps. These were more than just sitcom characters: they were role models.

One of the messages that TV shows of that time drilled into my young head was the idea that dreams really do come true and that, as long as I believed in myself, I could do anything I liked. This was an idea I latched onto for some time, as kids who want to be cowboys or astronauts often do, until I reached high school age and began to realize that being in a band may not ever pay the bills. I would be unable to program videogames if I was bad at math. No one wanted to pay for a book of my angst-filled poems.

At the same time, I watched musical artists accept Grammys and actors accept Oscars, each one giving the same speech: “Kids, stick to your dreams, no matter what anyone says. You can do anything you want if you put your mind to it!”

Every bump in the road feels like a divine judgment against my life choices; in that moment, no supportive parents or friends can convince you that success is a possibility.

This was nonsense, I insisted to myself. After all, these inspirational voices were coming from people who have been successful. The unsuccessful simply don’t have an outlet to proclaim to the world, “Look, dreams are all fine and good, but be reasonable.” By the time I graduated high school I was firmly established as a realist, convinced that my dreams of a professional career as a rock star, writer or game designer were merely unrealistic pipe dreams. I was mostly right.

Ironically, my chosen profession was something I later determined I was most unsuited for: full-time ministry. It’s one of those unique career choices that is only recommended for those who can’t imagine doing anything else – I assumed this was basically the case for me. Besides those other creative (and unlikely options), I could think of no profession I desired more than preaching and teaching the Bible to church members. I dubbed this more of a “calling” than a dream but, to be honest, the difference may have been merely semantic. Still, it felt selfless in nature as opposed to the selfishness that is often associated with pursuing a job in the entertainment industry. I chose the ministry because it seemed honorable, sensible and within my reach. I admired those around me who had chosen the same profession.

Over the course of the next 10 years, I attended Bible college and seminary. By the time I graduated seminary, though, I found myself without either a calling or a dream. When an impending divorce forced me to momentarily give up on the ministry, I felt a sense of relief that affirmed a surprising truth: this wasn’t what I wanted to do. Ministry, it had become clear, wasn’t for me. But I remembered writing. I remembered my passion for making newsletters, zines and websites. I started trying to write more formally about my passions: videogames, God, popular culture. It was stressful, invigorating, fulfilling. Suddenly, finally, my dream took a practical shape: I wanted to edit and write for a living.

Those who share this dream may also share the deep agony that comes with every moment that falls short of a success. Every bump in the road feels like a divine judgment against my life choices; in that moment, no supportive parents or friends can 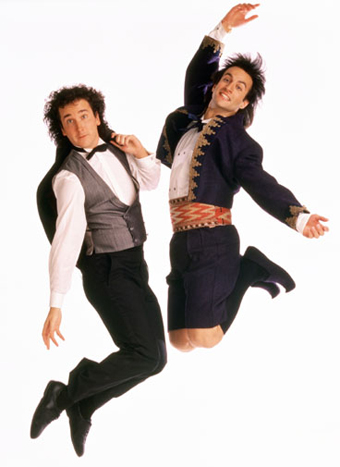 convince you that success is a possibility. In a time when the written word provides less and less opportunity for legitimate work, near-perfection and a constant stream of mind-blowing accomplishments seem like the necessary precursors to any kind of success. I was not living up to this expectation I had set for myself. But I doubt anyone does.

These days, I indulge in television shows befitting of my realist tendencies. Friday Night Lights, The Wire, and The Office all acknowledge the inevitable reality of failure and disappointment. They’re inspiring and hopeful in their own way, but it wasn’t until I played the web-based game Nothing’s Gonna Stop Me Now that I realized just how much I needed a palate cleanser. A simple game designed around the opening theme song of the late-’80s sitcom Perfect Strangers, it manages to breathe life into the arbitrary setup of a slapstick sitcom, taking me back to those years when I accepted television at face value.

The first time I played the game, it asked me to tell Balki about the dream I am chasing. I typed, cynically, the words “be a full-time writer or editor.”

The most important thing this game does is take every word and sentiment of the theme song at face value, giving the opportunity to play through every lyric as literally as possible, from “the wings of my dream” (Balki lifts into the air and flies amongst the clouds) to the “flame in my heart” (a flaming heart materializes within Balki’s chest) and “every dark street a light at the end” (Balki runs through a dark street of obstacles toward a glowing door of light). Every line introduces a seamless transition into a new challenge. It set the stage for me to accept, literally and unironically, the final words: “It’s my life, and my dream. Nothings gonna stop me now,” even with that absurd harmonica solo playing in the background.

I was caught off guard by how much this good-humored and sincere game lifted my spirits in the midst of a week of creative malaise – it made me remember the feeling of excitement I once had about pursuing my dream of writing and it made me respect Balki, not because of his exaggerated ignorance, but because of his undying enthusiasm.

When I finally got a good enough score, Balki and his cousin Larry did the famous “Dance of Joy,” the sort of thing you would never see on television in our current age. It is wholly unbelievable: two male cousins embrace, their legs kicking outward in rhythm to their own mouthed tones. They both leap into the air, mime a kiss, and cousin Larry (the serious one) jumps, legs first, into the arms of his cousin, arms draped around his neck. They freeze there, waiting for the applause to die down. They soak in the approval of their audience. Balki and cousin Larry are truly happy, but I couldn’t tell you why. No one really remembers what they were dancing about anymore. All anyone can remember is the dance of joy.

Navel Gaming is a bi-monthly column devoted to gaming, existential crises and the search for meaning. Follow Richard Clark on Twitter @DeadYetLiving for daily tweets of the same.