Greetings, fans of toys, collectibles, gadgets and oddities! I have returned from the depths to bring you some of my favorite finds since Toy Fair. But first, I want to clear the air about some things. 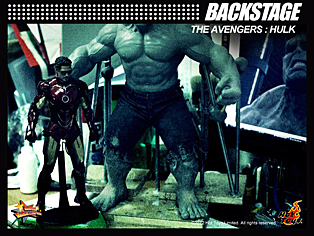 Yes, I did abandon my Toy Hunter Twitter account for a number of reasons, but mostly because I just couldn’t handle two Twitter accounts. I really don’t tweet much as it is, so it made no sense to have the second account. I will forever be known as the Unwinnable Toy Hunter and despite the fact that other people are using the moniker, I’m the original. I always like to say, “Often imitated, never duplicated.”

I don’t hunt down rare or vintage toys to turn a profit, I do it for the sheer enjoyment of loving toys. Most of what I currently buy – it’s not much – is a reflection of what I loved and played with as a kid – lines like G.I. Joe and Star Wars. They bring me back to a time in my life where I only had to worry about school and having fun. It’s a nice escape from the rigors of adult life. The Toy Hunter name for me has some history. It’s actually the name of a startup business I had with a former friend back in 2003. We already scoured the tri-state area’s brick-and-mortar toy emporiums for discounted and rare figures, so it made sense to form a business and find cool stuff for other people. Sadly, we disbanded but the name lives on. Now on to the good stuff! 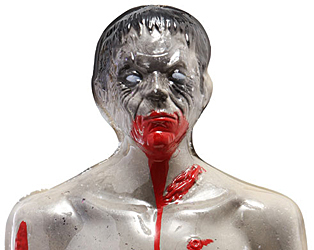 The jabroni-beating, pie-eating, trailblazing, eyebrow-raising, electrifying entertainer known as The Rock makes his debut as the fourth sports star to be immortalized in plastic as a G.I. Joe character (it probably helps that he’s in the movie). The Rock joins wrestlers Sgt. Slaughter and Rowdy Roddy Piper and football star William “The Refrigerator” Perry in a truly elite class of figures in the series. That is, if you want to count the never-produced Rocky Balboa action figure. The Cobra Commander looks especially badass and is more in line with the comics and toys. They need to make up for the horrible squid mask and “doctor” persona from the first movie. I wouldn’t be surprised if Hasbro stepped in and laid down the law with the second film.

The Avengers are a hot topic right now and Hot Toys recently leaked a teaser photo of a true 1/6 scale Hulk figure. It looks like it features a modified version of their muscle body and should have a massive amount of articulation. For those that think this might be a statue, think again – an articulated body sits under that rubber skin. I like that his scale is in proportion to a 12-inch Iron Man. I’m sure this figure will easily be over the $250 mark.

Recent episodes of the Discovery channel’s Sons of Guns and American Guns featured a zombie theme. They each created custom builds for a zombie reducer or end-of-days weapon. Since we don’t have zombies wandering around to shoot, what do you do for a target? Well, ThinkGeek is now selling Bleeding Zombie Target Dummies similar to the ones that were used on both shows. The dummy splatters paint in the area that is shot, which makes for instant hit detection. Now who’s going to make the bleeding human target dummy?

On the weird gadget end, I came across a website named Japan Trend Shop that houses an interesting variety of electronic oddities and lifestyle apparatus pulled straight out of Tokyo. For all you cosplayers out there, here’s a replica outfit of Ulala from Sega’s dance music game, Space Channel 5.

Also from Japan Trend Shop is something that can appeal to everyone – the Noiseless USB Karaoke Microphone with Wii support. This is every parent’s dream. Now you can tune out the offbeat vocal stylings of an 11-year-old or the drunken pig squeals of worn-out-their-welcome house guests. There are many interesting items on this site that need to be seen! I was just looking for a Gakken Mini Electric Guitar and I stumbled across this treasure trove of Japanese goodness. 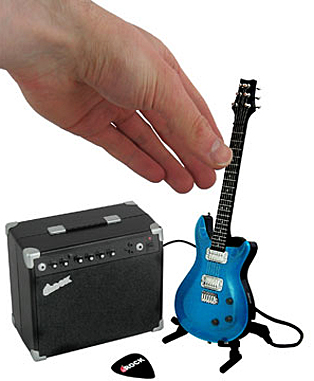 Speaking of electric guitars, next up is the U-Rock Mini Guitar MP3 Player. It looks to be close to 1/6 scale and can be a perfect accessory to that custom rock god you’ve been working on. The guitar has 1GB of memory and the amp contains a speaker, so you can rock out in your cubicle or have your 1/6 Terminator figure jam to “You Could Be Mine.”

I love customizing action figures, and years ago I made the switch from 3 3/4 to 12 inch or 1/6 scale. The larger scale allows for better sculpting and finer detailing of equipment and accessories. I’m always looking for toy dealers that sell loose 1/6 gear. Most dealers prefer to sell boxed figures, but a number sell loose items, from weapons to clothing to body parts – it’s the Army/Navy store of Barbies. I found a 1/6 iPhone and iPad set and realized I can finally start work on that Matt Marrone inaction figure.

I also received a certain figure in the mail recently but have yet to find him as he is known to blend in with his surroundings. Stay tuned for a full review once I locate him. I might have to use my ninja skills on this one.

Rookie of the Year: Raiders of the Lost Wii