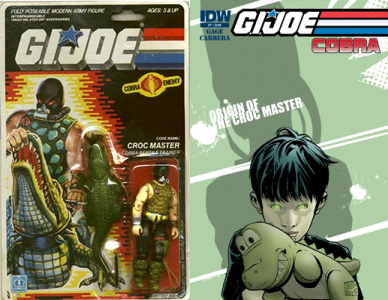 Despite the cool costumes, international financing and cutting edge weapons tech, Cobra has always been a bit of a joke. All that has changed in IDW’s comic series G.I. Joe: Cobra.

Writers Christos Gage and Mike Costa have taken a terrorist organization that aired a Cobrathon in 1986 and turned it into a suave and menacing conglomerate of horrors. By re-imagining goofy characters into stone cold badasses (see Chuckles), the book is reminiscent of the work Frank Miller did with Daredevil. Honoring what has come before, the book stays true to the spirit of the characters, but it adds depth and considerable shadow to the world of G.I. Joe.

Take, for instance, G.I. Joe: Cobra # 7, which features the origin of Croc Master. Yes, you read that right…Croc Master.

Croc Master first popped up in the G.I. Joe mythos with the 1987 action figure set. 1987 was the year things kept getting silly (Nemesis Enforcer, anyone?), so Croc Master was a bright spot in the line. He looked nifty. He came with a crocodile [Editor’s Note: actually, every version of Croc Master has come with a toy alligator. How do you tell the difference? Crocs have long, narrow snouts while a gator snout is short and broad. Knowing is half the battle kids!], he wore a gas mask and his primary weapon was a whip!  He and his crocodiles guarded Cobra Island, dispatching of anyone foolish enough to come snooping around.

I remember being creeped out by Croc Master’s file card, especially the part that implied cannibalism (seriously, peep the file card). 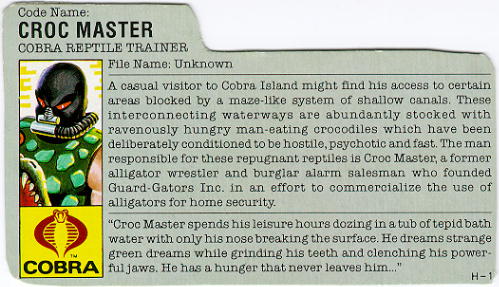 G.I. Joe: Cobra # 7 seems to hook on that file card’s last paragraph and amps up the scary factor in the tale of Croc Master’s early life and his recruitment into Cobra. The issue reads like a crime/horror pulp. Fun stuff!

The story is part of a larger arc involving Serpentor and Scoop (two extremely silly characters both re-imagined brilliantly here), but these scenes act more as a framing sequence than anything else. The issue reads as a standalone and you are not left feeling like you need to read the past and next issues, but you WANT to.

Hit up your local comic shop and grab a copy of G.I. Joe: Cobra # 7 – it will plague you with green dreams.

Hail Benefits! Finding the Super Criminal Syndicate that is Right for You
Previous Post