Since this is Villains Week, I thought I would once again scour the interwebz for some of the best and most memorable villains to ever grace a blister pack. I’ll begin by stating that I love villains, and that I am going to dip into the toys of yesteryear – that bygone time that truly left its mark on me. 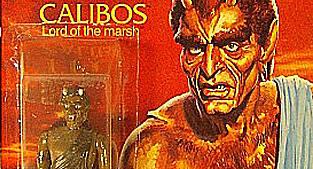 My first pick is one that I personally used in many childhood battles. In 1981, we were treated to a movie of mythological proportions named Clash of the Titans, which resulted in a basic toy line complete with an articulated Kraken. While the Kraken is a beautiful specimen, my choice for mythological gangsta has to be Calibos. Early in the movie, he is transformed into a goat-like man beast and, after losing a hand, he mounts a trident to his arm. Although the action figure doesn’t feature the trident, it does have a demonic look to him which seals the deal for me. Who wouldn’t want him to lead their army into battle? 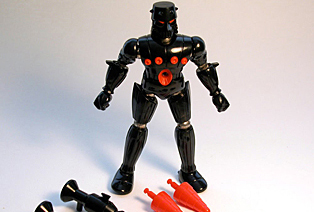 Before the Transformers rolled around, there were the Micronauts. Ranging in size from 3 3/4 to 20 inches high, they were clear plastic androids that had a great deal of articulation for a toy of the 1970s. Some of the crazy Micronauts vehicles had interchangeable parts, which truly made it a toy line ahead of its time. This brings me to the menacing Baron Karza. The figure is about 6 inches tall and has magnetic points at the shoulders, hips and neck, which allow one to reposition his limbs or insert weapons into the sockets. He also had a deadly action feature that would be abandoned in the ’80s – a chokingly hazardous abdomen firing rocket! Baron Karza came packed with a black steed that also had magnetic joints, which enabled one to concoct a hellish robotic centaur. 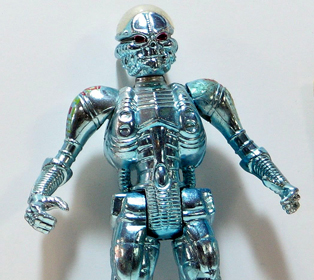 Marvel and DC have been at war for a long time, even when it comes to toys. I loved my Secret Wars action figures back in the day, but I also had most of the DC Super Powers action figures. I really want to give the honor to Darkseid. He is blue, mean and is a bigger badass than Marvel’s Apocalypse, Thanos and Mister Sinister combined. But my main pick is actually Brainiac. In a relatively colorful line, the figure features a plain metallic finish and is the first robotic version of the character. Plus, his brain is exposed! This line had some great villains, but Brainiac went from a green Martian to a Terminator-inspiring beastly robot.

Since my brother is seven years older than me, I got to play with many toys from the ’60s, like Planet of the Apes, Star Trek, Evel Knievel and many more. While digging for old figures online, I remembered a freaky villain called Maskatron. This villain from The Six Million Dollar Man toy line looks quite evil. If you’ve ever seen the movie Westworld, then you might understand where the inspiration for this figure comes from. The toy itself has three masks: one of Oscar Goldman, one of Steve Austin and a face for Maskatron. The figure also has two arm attachments: grip and suction. The weirdest part has to be that all his limbs are removable. The face is pretty frightening without his mask, but if you braved Yule Brynner’s robotic Westworld look, then Maskatron’s is actually pretty cool. 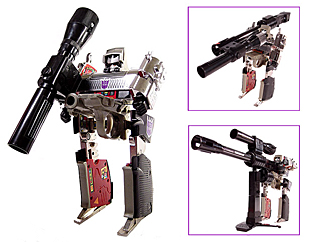 The concept of Transformers alone was amazing to witness as a kid, but my standout villain from the line is Megatron. Everybody else is a vehicle, but this guy gets to be a gun (and not just any gun, but a Walther P-38 with stock, scope and barrel extension – a direct homage to The Man from U.N.C.L.E). I like the Microman Generation 1 version a little better, for he looked closer to his cel-colored counterpart. Megatron’s transformed body was much boxier and had beefed-up legs. The Hasbro G1 Megatron has a wider torso with thin, flimsy legs, thus making it extremely hard to pose. However, they made up for that with the look and detail of the gun mode. Also, the Microman Megatron fires pellets – a feature that was removed from the American version.

Of course, I have to mention G.I. Joe. The 25th Anniversary/Modern Edition line is especially chock-full of Cobras. The honor of best villain toy, however, goes to Cobra Commander. I don’t think any character in any toy line has so many versions available. The Commander’s 3 3/4 inch figures top off at 50 versions, not to mention the 2 inch, 3 inch, 8 inch and 12 inch versions. I bet there are at least 70 Cobra Commander figures available (and the number is rising). 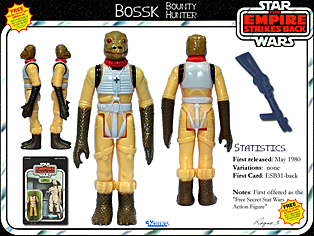 I’m sure some people will freak out if I don’t mention Darth Vader. There, I mentioned him. Actually I didn’t want to pick Vader for the fact that he is one of the most iconic villains in the history of media. His Kenner version doesn’t do the justice of the modern interpretations, and most of my list is compiled of toy villains rather than a villain from a movie – aside of Calibos. At this stage of the game, there are way too many Darth Vader toys to choose from and even if I had to choose one from yesteryear, I would still have a hard time narrowing it down. So my pick for villain toy from the original Star Wars trilogy is Bossk. He’s a mean-looking, lizardman bounty hunter who has been both a friend and enemy of Boba Fett. He appeared in The Empire Strikes Back and was dressed in his trademark X-Wing fighter pilot attire. The Kenner figures were a bit stiff, and some characters didn’t cross over well into plastic space, but Bossk is one of those figures in the line that looked great from the get-go. 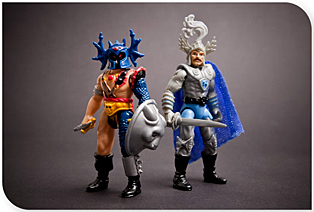 Finally, the one figure that outshines everyone else is Warduke from the Dungeons & Dragons toy line. I played D&D for many years during its infantile stages. My friends and I convened many Saturdays, creating characters and taking on daunting quests that seemed to last forever. We created our own post-apocalyptic offshoot and eventually progressed to tabletop gaming and finally card-based games. I have my history with the line and was a little disillusioned by the cartoon, which was a noble attempt at marketing a cult game for the masses. At least it included some monsters right from the same universe many of us frequented. While the cartoon made some of the characters from the game seem goofy, Warduke rose above them all and remains one bad mutha. He looks like a war-torn veteran that turned to the dark side and like Baron Karza, he rides a menacing looking-steed that completes the package. Warduke still looks awesome by today’s standards and is often the subject of custom figures and sculptures.

Unwinnable’s Toy Hunter is the baddest villain of them all. Follow his evil plans on Twitter @Kursse.