When I was a kid, my parents were pretty strict with what movies I could and could not watch. My father had to pre-screen Ghostbusters and Batman before my sister or I got to see them. So, I definitely did not get to see RoboCop or RoboCop 2. However, I did find a cheat thanks to the tireless machine that was Orion Pictures’ marketing department. Thanks to the RoboCop NES videogame and popular culture at large, I didn’t have to see the RoboCop movie to understand the basic premise and origin of RoboCop. I just had to play the game and talk to friends who did see it. However, I didn’t really have any exposure to the satirical tone of the original movie until I read Marvel Comics’ RoboCop 2: The Official Movie Adaptation. 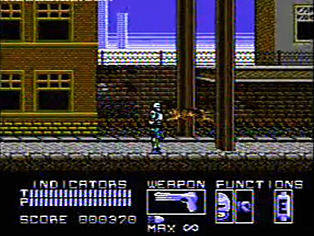 I was 10 years old and still forbidden to see a RoboCop movie, so I did the next best thing – I snagged the RoboCop 2 comic book adaptation. I never got much of the social commentary in RoboCop for NES, but the second page of the RoboCop 2 comic threw it all out there! There was the fake ad for a lethal auto antitheft device, the nuclear power plant in the rain forest and of course, senseless violence in the streets!

Writer Alan Grant (Shadow of the Bat), artist Mark Bagley (Ultimate Spider-Man) and company adapt Frank Miller and Walon Green’s screenplay into an over-the-top comic book. The RoboCop 2 comic isn’t exactly subtle (but, as I later discovered, neither was the original film). It opens with Old Detroit in chaos. The police are on strike, a new and highly addictive drug, Nuke, plagues the streets and OCP is getting ready to foreclose on the city government.

The first thing that didn’t make much sense to my 10-year-old brain was that RoboCop survives an exploding car. He had a hard time with guard dogs and unarmed street thugs in the NES game! Looking back, I realize the limitations of the platform beat ‘em up/shooter formula in regards to RoboCop’s nigh invincibility, but that didn’t keep me from crying a retroactive “bullshit” on the game. 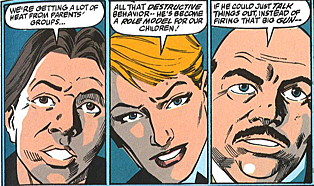 The RoboCop in this comic was a badass. Got a rocket launcher? Bah! A barrage of machine guns? No problem. Want to run RoboCop over with an armored truck? Good luck, creep. This is the RoboCop I wanted protecting the streets!

Grant and Bagley do a good job fitting the screenplay’s story into 61 pages of action, drama and blunt social commentary. Bagley captures the brutality of RoboCop and still keeps it PG-13. There are hints of the artist that made me tear up during Ultimate Spider-Man # 160. The scene where RoboCop electrocutes himself in order to erase directives like “ENCOURAGE NUTRITIONAL AWARENESS” and “DON’T MONOPOLIZE THE BATHROOM” is some good storytelling. They even manage to fit in a rather meta scene where OCP tries to make RoboCop more family-friendly, echoing the attitudes of parents’ groups across the late 1980s U.S.

Other times, the comic is just batshit crazy. There are several images that have stuck with me longer than I care to admit. One of my favorite images is fairly early on in the book, when OCP tries to introduce the next level of RoboCop – the aptly named RoboCop 2. This new cop-turned-cyborg improvement over Alex J. Murphy can’t seem to handle his new upgrades and proceeds to rip his own head off. 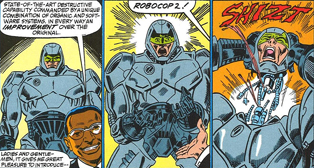 RoboCop 2: The Official Movie Adaptation is a representative of a lost art form. At the time of publication, Internet piracy, On Demand services, DVD and Blu-ray did not exist. If you wanted to watch a movie at home, you could wait for the VHS tape to come out as a rental or go to Chinatown and buy a bootleg VHS tape. There were only two other ways to experience the story – the novelization and the comic book adaptation. While some blockbusters had videogame adaptations, they seldom followed the scripts of the original film (Friday The 13th and Top Gun come to mind). Of those three options, the comics were always my favorite.

Comics, like film, are a visual medium. The “Official Movie Adaptation” was the perfect way for a kid to relive the blockbuster in the months between theatrical release and VHS release. Now, videogames have gotten more sophisticated and all but replaced the comic adaptations. In fact, I think the last “Official Movie Adaptation” I enjoyed was Spider-Man by Stan Lee and Alan Davis. There are still comic book adaptations published today, though more of them serve as movie prequels or tie-ins than as adaptations. RoboCop 2 adapted the film’s story for another medium, allowing readers to hold onto the movie long after the house lights go up, creep.