I was too young to see RoboCop in the theater. I tried to watch it on HBO a year or two after it came out, but that early bloodbath in the OCP boardroom scared me away. The violence was too graphic, the comedy too black for fifth-grade me. By the time I was old enough to appreciate the movie, RoboCop had been transformed from this forbidden grown-up thing that scared and alienated me into a patronizing kid’s cartoon, just another marketing machine that hit the same toy/comic/cartoon trifecta as G.I. Joe but with the success of the Air Raiders. RoboCop was too mature for me in elementary school and too childish for me in middle and high school. 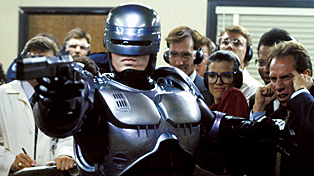 When people talk about RoboCop, I don’t get mental images of a badass cyborg cop shooting a rapist’s crotch through his victim’s legs or blasting Ronny Cox out of a 95th-floor window. I think of a massive tool rescuing Sting by ripping a door off a steel cage, insulting my twelve-year-old intelligence in the process. I hated Sting. I wanted the Four Horsemen to break his knees. That made me hate RoboCop even more than I already did.

When people talk about RoboCop, I think of the advance photocopy of RoboCop #1 that Marvel Comics mailed me in 1990. They were fishing for fan letters to run in the first issue and clearly recognized me as an unthinking, uncritical rube who would breathlessly rave about whatever piece of crap they sent me, as if I liked everything I got in the mail for free. I read it, struggled to write a letter that wasn’t completely dismissive, gave up and never responded. 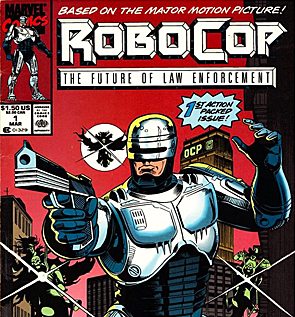 So yeah, I’d never seen RoboCop until tonight. Like I said: pretty good! I expected it to be funny, but I’m surprised at how legitimately hilarious it is. Unlike most ’80s action films, RoboCop recognizes its own absurdity. Hell, it revels in it. The middle part of the movie satirizes the excesses of those slick ’80s action movies better than anything that’s come out since. When RoboCop beats up Ray Wise in a nightclub, it perfectly tears apart that embarrassing scene that almost every action movie has, where the beefy supercop has to chase a perp down in a pumping discotheque. I expected RoboCop to mock the corporate culture and hardline anti-crime furor of the 1980s, but I’m surprised that something so dry and self-aware, and with such a black sense of humor, not only got released by a major studio in the ’80s but became a pretty big hit. Sadly not surprising: The enduring timeliness and prescience of its concerns over the mechanization of our defense and the shallowness of the news media.

It’s difficult to separate this one single movie from all the crap that followed. I’ve never seen the sequels or the cartoons or played with the toys, but it’s ridiculous that that stuff existed. As a kid, I knew I was being pandered to, and in retrospect it’s crazy how common it was to regurgitate decidedly non-kid friendly movies into soulless time-sucks for mindless 8-year-olds. If Inglourious Basterds came out in 1986 I probably would’ve gotten a Bear Jew action figure for Christmas.

Oh hey, now that I think about it, Marvel might have sent me Darkman #1 and not RoboCop. Same difference, really.

Unwinnable Presents: Unlistenable Episode 38 – One for the Bronies